Invisible rooms is a captivating, major new exhibition of works by the artist Francis Bacon. It displays more than thirty paintings alongside rarely seen drawings and documents.  As well as painting the human figure, Bacon also took inspiration from  photographic reproductions showing a range of approaches to his subject matter. This is the largest Francis Bacon exhibition ever staged in the north of England. 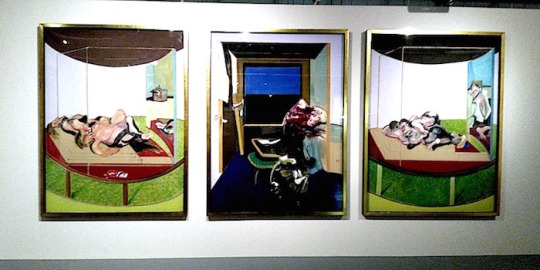 In Francis Bacon’s painting, ‘ Three figures and a portrait’,1975, three haloed figures, one of which could refer to George Dyer, Bacon’s lover at the time who committed suicide in 1971 are brought together in a room. Their forms are twisted, sculpted, a contrast of mutating forms and shapes. The painting is also made of planes of various types of space. The mustard colour tones and yellows of the painting contrasted with the black portrait  of the fourth figure give this painting an unusual and disturbing intensity.

In many of Bacon’s works, the artist uses spheres, flat spaces of intense colour and the cube,a kind of ‘glass invisible cube’, to decipher how he includes the viewer in the space of the painting and to emphasise his subject. Sometimes the viewer is isolated from the painting and sometimes it seems as if one can walk into the actual space. In the painting of ‘three figures’, the blind-folded portrait in the background observes the scene. There is a sense of suffering but something that is also aiming to try and discover the root of human existence. In the painting,‘ Crucifixion’ he also suggests an understanding of human brutality. This sense of suffering, cruelty and brutality is something that re-occurs within his paintings.

This feeling of observing the world and expressing human suffering is something that Bacon is preoccupied with in certain works. For instance in his painting of ‘Pope Innocent X ‘1650, originally painted by the Spanish painter Diego Velázquez, he introduces ambiguous space, recalibrating the relationship of subject to space’, similar in some ways to Picasso, an artist he admired and who also interpreted and experimented with themes and portraits by Velázquez. The work shows a distorted version of the Portrait of Innocent X. The work is one of a series of over 45 variants of the Velázquez painting which Bacon executed throughout the 1950s and early 1960s.  In this painting, the throne becomes a complex framework of represen- tational and abstract lines.’ There is also the concept of the ‘screaming figure’ in his works, which could be seen as a reference to his interest in the human condition at its core, something quite organic and primitive, as if  the human condition is composed from this and everything else transcends from this basic human instinct. ”In Bacon’s version of Velázquez’s masterpiece, the Pope is shown screaming, yet his voice is “silenced” by the enclosing drapes and dark rich colours. The dark colours of the background lend a grotesque and nightmarish tone to the painting. The pleated curtains of the backdrop are rendered transparent and appear to fall through the representation of the Pope’s face.”

Bacon refers to fictional forms and characters, at other times portraits of friends and self portraits and sometimes he uses photographs to inspire his work. Some of these were taken by his friend the photographer, John Deacon as in ‘’ Portrait of Isabel Rawsthorne Standing in a Street in Soho” 1967.

Isabel Rawsthorne was an artist and model at Liverpool college. Brought up in Liverpool, her life story is interesting.  A painter and designer, well known in her day, it would be well worth looking further into her life history. As well as being a model, many of her artworks depicted dancers in the Royal ballet. Her photograph is displayed at the exhibition at Tate Liverpool. Bacon’s painting of Isabel is striking in its intense blue, its ambiguity and multi-layered space. The car in the background has also been transformed into something unusual other than a car. Perhaps everyone will see the car differently. ‘’For Bacon, a figure’s setting could be firmly abstracted while still being evocative of room-space.’’ Bacon uses the cube and the curved line to express interesting shapes and drawing within his works taking  the subject away from the domestic context.”

Throughout these works, there is a sense of observing how the human figure is perceived by the artist In terms of how he feels rather than what he actually sees. Representation is not as important as feeling and not as important as memory and interpreting the memory or feeling of that person or the relationship. This is also an approach which runs through the other two significant exhibitions by female artists Ella Kruglyanskaya and Maria Lassnig whose exhibitions run parallel to that of Francis Bacon. 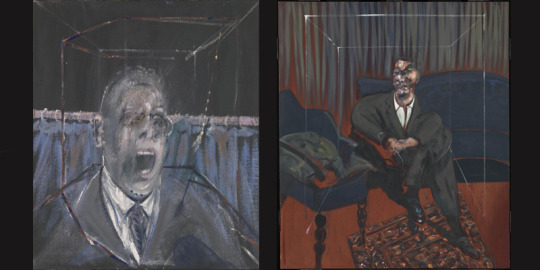 On entering the exhibition by Francis Bacon, I was immediately lured by the overall space and positioning of the paintings which were displayed elegantly. I was surprised to encounter such vivid colour in his works. I had always perceived his works as quite dark but this exhibition shows the colourist in Bacon’s works, the vivid emeralds and oranges and blues which dominate the walls. Powerful works and in my opinion many of them masterpieces. The giant canvases and the references in his works to poetry, his relationships and friendships were interesting and there was something dark and slightly disturbing that kept the exhibition moving, making me want to find out more about the artist and his work. I was particularly taken by Bacon’s triptych of 1967.

This ‘Triptych inspired by TS Eliot’s ‘Sweeney Agonistes’ evokes the experience of reading the themes of violence and life’s futility in Eliot’s poetry.’ What I loved about this piece was not only the dramatic and interesting use of colour but the way that Bacon creates a sense of illusion, emphasising shadows and space, creating new spaces and perspectives within each work. There is an otherworldly feel about many of these works creating barriers between spectator and the artworks as well as creating a very personal space within the works. A sense of not being included or able to embrace these works personally is emphasised through the use of his ‘glass cubes’ which focus on the ‘architecture of his paintings’ creating a new approach to conveying the human figure within their surroundings in order to express the condition of humanity as he experienced it.

I found that people had mixed reactions to Bacon’s works, some unsure and some very engaged with his work. Whether you enjoy Bacon’s works or not they are without doubt, extremely thought provoking. My personal view was that his works were masterpieces in their honesty and his own dark view of the world, his ability to send out the message that all is more than meets the eye. His works are important for art to communicate on levels of expression that push the boundaries of what people are used to feeling, important works to encourage us to think about the human condition. Bacon does this in a way that is not too threatening, allowing us to create our own decisions and to find our own meanings. The answers to his works are not obvious but rather ambiguous.