The Franz West show at Tate Modern, with a smaller spin-off at the London branch of Zwirner, the late artist’s long-time dealer, presents the critic with a series of dilemmas. The first is that the artist, though ‘avant-garde’, is dead. This is increasingly the case with supposedly radical and progressive solo exhibitions here in London, both in our big official galleries and, to a somewhat lesser extent, in our grander commercial ones. There’s nothing more to come, no surprises. The career concerned is tied up in one neat parcel. So too, perhaps, is an idea about what is officially ‘contemporary’ – a passive corpse, not some living thing.

All this a really just a giggle. Play with it. Don’t take it too seriously – ELS

Another characteristic, very specific to this particular pair of shows, is that artists who identify as avant-garde – that is to say, as the makers of new and radical art, are increasingly apt to be embarrassed by their own temerity. They express this in different ways: by choosing humble, often fragile materials – papier maché, newspaper, plywood, plaster – in preference to more solidly permanent ones; and by stepping over the barriers that separate what we call ‘art’ from what we prefer to call ‘design’ – e.g. the making of objects that supposedly have practical use: to be sat on for example. Above all, by signalling to the audience that all this a really just a giggle. Play with it. Don’t take it too seriously. All these impulses are fully present in the Tate show. 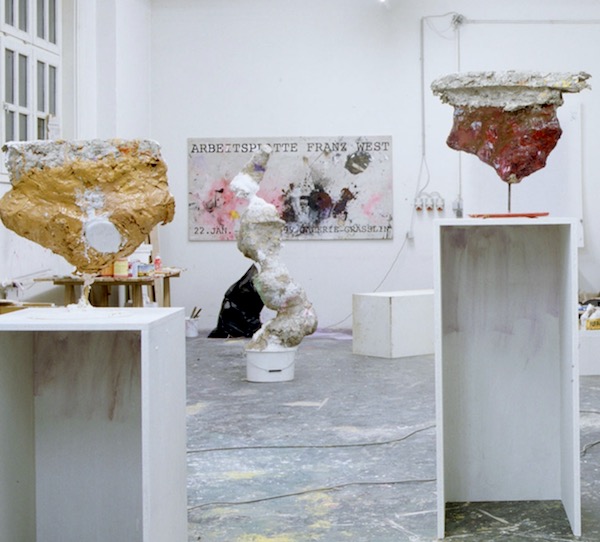 To give some examples: if you look outside the Tate Modern building, at some larger sculptures on the terrace outside, there are some rudimentary forms in pastel colours – a couple of loops, one yellow, the other blue; a set of four pink spheres, rather roughly shaped, joined by a rod, climbing up, one above the other. And on the same plinth as the pink spheres, a larger white one, equally rough. It’s hard to find any real aesthetic interest in these objects, either in themselves or in their relationships.

Inside the gallery, one of the more striking items is a large chaise-longue in green metal, perversely large, and shaped so that the two individuals who might sit in it are placed as far as possible from one another. Barely within shouting distance. This impractical object is accompanied by what looks like a perfectly practical green metal pedestal chair.

If you look beyond this, there is an array of sofas, covered in carpets. These are placed so that those who sit can contemplate a very large pink object of indeterminate shape, fastened to a wall in front of them.

Elsewhere in the show, there are objects made to be played with, but already, after a fairly brief life-span, too fragile for use, and safely roped off. Also roped off, but a great deal more memorable, is a group of huge white heads, with rudimentary features and gaping mouths. These fall into a surprisingly familiar, long-established Early Modernist category – that of sculpture inspired by African tribal art. ‘Hello, Demoiselles d’Avignon!’ Nice to meet you again!’

What the exhibition as a whole seems to demonstrate is that the Modernist culture inherited from the earliest years of the 20th century was, by the time these objects were made, at the end of its tether. We need something else.