Like quite a lot of grand museum exhibitions in London recently, this new show at Tate Britain ‘IMPRESSIONISTS IN LONDON’ doesn’t quite tell its announced story. It may describe itself as being about Impressionists in London, but the less exciting subtitle, French Artists in Exile 1870-1904, is much closer to providing the exact truth about what it contains. Yes, there a quite a lot of paintings on view that are works by major artists connected with the Impressionist Movement. But there is, in addition, a good deal of stuff that doesn’t really have much to do with Impressionism as this is usually defined.

What brought French artists to London in the first years of the period reviewed, was a political and military cataclysm – the Franco-Prussian War, and the civil conflict that followed – the Paris Commune – which resulted in the destruction of many major public buildings in the city, among them the Tuileries Palace. The first part of the exhibition offers images of some of the damage. Paris, in the condition it was reduced to by siege and military defeat, and then by the Commune, made a striking contrast with London, newly risen to its position as a megalopolis, and busy adorning itself with buildings to match. As the exhibition catalogue points out, the Houses of Parliament – a favourite subject with Claude Monet, the most important of all the Impressionist painters who worked in London – wasn’t fully finished until 1871. They weren’t the crumbling old wreck of a place we have now, with quite a number of MPs still resisting efforts to turf them out and put what was in many ways a jerry-built structure back into some kind of order.

The French refugee painters, when they got to London, were by no means always impressed. Pissarro, Monet’s fellow Impressionist, complained that ‘there [was] no art.’ Daubigny moaned; ‘How awful modern English painting is! They certainly have need of our influence… When they paint fruit or flowers, they appear to be made of glass or sugar. Landscapes seem to be made of chenille or seem to have been brushed in with hair. Figures are as rigid as stone.’ 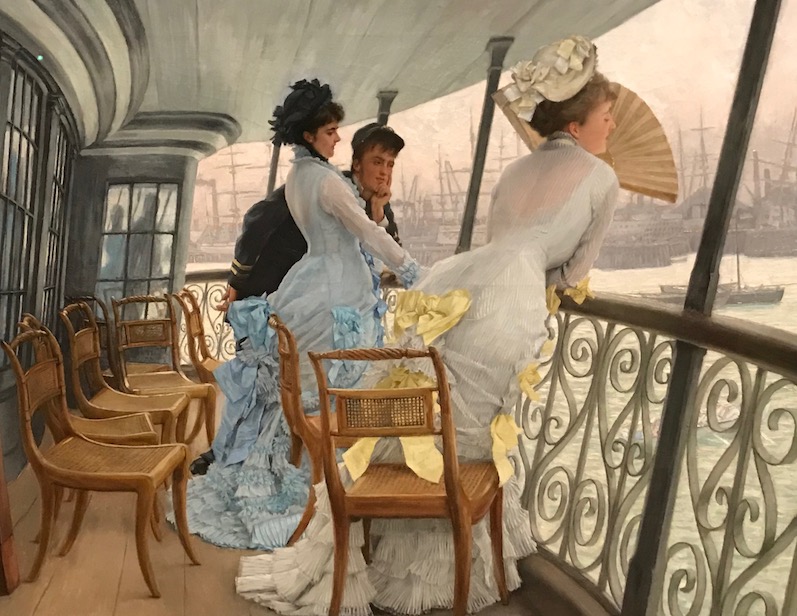 James Tissot arrived in London in 1871

The immigrant who made the quickest success was James Tissot (born Jean-Jacques), who arrived in London in 1871, having been one of the defenders of Paris against the Prussians, and a somewhat border-line member of the Commune. He was never an Impressionist, though in the late 1860s, in Paris, he was a friend of Degas, who painted an excellent portrait of him. Later, in 1874, when Degas asked him to take part in the first Impressionist exhibition, Tissot refused.

Settling in London, Tissot quickly made a success with paintings of fashionable life. In the year that he refused Degas, Tissot was sarcastically described by Edmond de Goncourt as having ‘a studio with a waiting room where, at all times, there is iced champagne at the disposal of visitors.’ Already, by 1872, he was earning nearly 100,000 francs per annum for his work.

Many of his paintings at this time portrayed a beautiful English divorcee called Kathleen Newton, who was his mistress. When she died of consumption in 1882, he returned to Paris. In 1885, he reverted to the practice of Catholicism, and spent the rest of his career, until his death in 1902, making religious works, among them a much-acclaimed series of 365 gouache illustrations illustrating the Life of Christ.

One of the pleasures of the early-to-middle stretch of the Tate Britain show are some of Tissot’s complex, exquisitely complicated paintings of high-society life, incidents with an element of moral ambiguity that was sometimes noted disapprovingly by his contemporaries, though this taint was not enough to mar the artist’s success.

Quite a lot of that middle stretch of is given up to sculpture rather than painting – generous helpings of Alphonse Legros, Jules Dalou and jean-Baptiste Carpeaux. These are well enough in their way but did little to excite me.

The event returns to form in the final rooms of the show, in particular with a late series of Thames views made by Monet in the very earliest years of the 20th century. There are in particular six superb canvases of the Houses of Parliament, all showing the building from the same point of view, at twilight, wreathed in various hues of mist and fog. If we complain of pollution in London, now we have to remember how much worse environmental conditions were a century and more ago.

Perhaps tellingly, none of these six pictures come from a British collection. They present London as a mysterious, alien universe.

The show then concludes with a flourish with a group of paintings of more or less the same subjects made a year or two afterwards by the young Fauve André Derain. One of these does belong to the Tate, and another to the Leeds City Art Gallery. Fine works all of them, but a lot noisier and less subtle than the Monets.

The EY Exhibition: Impressionists in London, French Artists in Exile (1870 – 1904) is the first exhibition to map the connections between French and British artists, patrons and art dealers during a traumatic period in French history. Highlighting their engagement with British culture, traditions and social life, their art is a fascinating insight into how London was perceived by the visiting French artists and the remarkable works that came from their time here are not to be missed.