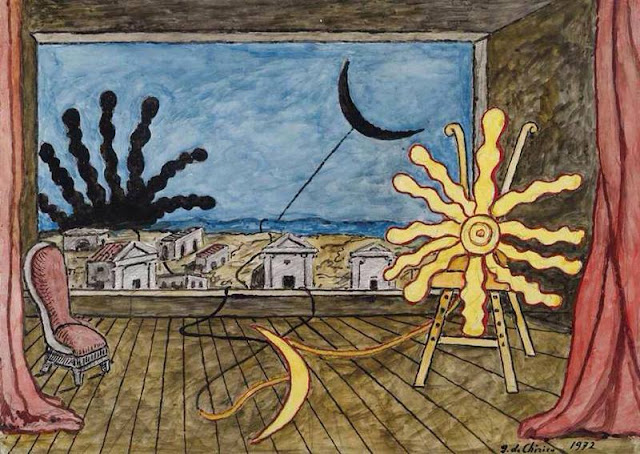 Sun and Moon, 1972
Happy times if, like me, you like all phases of de Chirico. Nahmad has the odder of two substantial shows, for which Francesco Vezzoli installs paintings against a wallpaper background of de Chirico motifs, complete with astroturf floor. There are 18 de Chirico’s: first, run 1920’s classics, later ‘self-copies’ of the same subjects, some misdated by the artist (can you forge yourself? Discuss), self-portraits in his ‘old master’ style… and an ante-room full of the little-known late motif of the sun as a character which can, for example, sit on a chair. Vezzoli contributes three works: paintings which vary de Chirico’s originals in appropriate spirit, and a classical torso to which he has added a de Chirico head à la tailor’s dummy.  Great fun, and well complemented by the more scholarly presentation of 25 de Chirico’s at Tornabuoni. 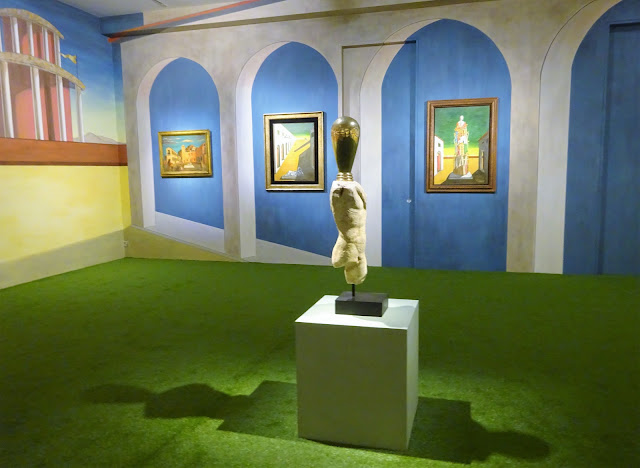 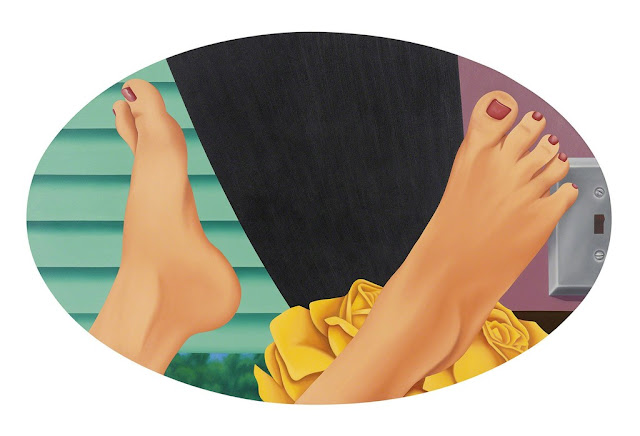 I guess one thinks of breasts for Tom Wesselmann’s pictures of body elements, but hands and feet star in the Gagosian half of this double-bill. In the oval Bedroom Painting #21, you might think they are set against abstract elements, but that radical black centre is a curtain, overlapping a green blind, allowing a slither of landscape; and we see yellow flowers, a section of purple wall and a light switch. And if you find it a little cold in its rigorous, formal, implicitly sexual organisation – what are these, adverts for parts of women? – then there’s a warmer, more intimate feel to the complementary show of later work in Almine Rech’s newly-opened basement space, All include the face, such as this mother and baby study, which flowed into a shaped canvas of 1979-91. 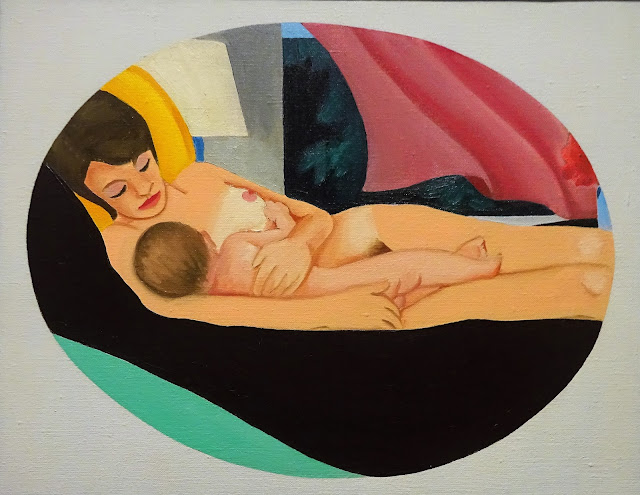 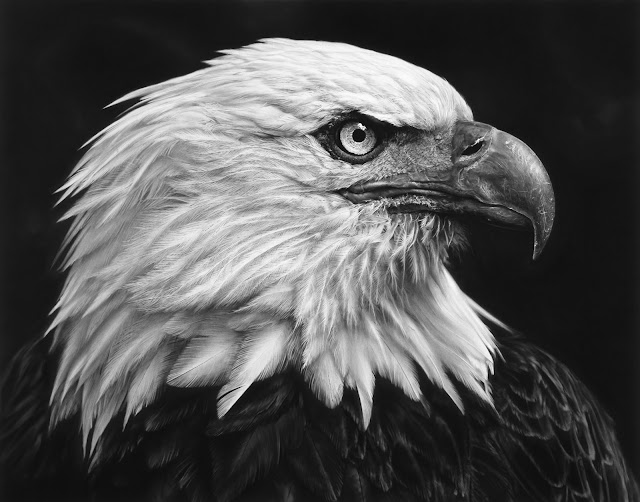 This, Robert Longo’s  most substantial show yet in Britain, features 30 works, many of them enormous charcoals in his signature, darkly radiant, technique.    True, Longo makes images because he loves them, but he looks for subjects which resonate both personally and publicly and come together to form an engaging account of the world with seduction and power at its centre. Here the overview, under a title taken from the doomed Macbeth, incorporates Ely House’s former life as the home of the Albemarle Club, terrorism, resonances from art history, and an unsurprisingly jaundiced view of America now. The backstory and interconnections ratchet up the power of individual works, which include a friend in a Burka, X-rays of famous paintings, a redacted Guernica, bullet holes in glass, a ravaged stars and stripes, and the ‘paths of the mind’ which merges tree and brain images in the wake of his stroke in 2013. 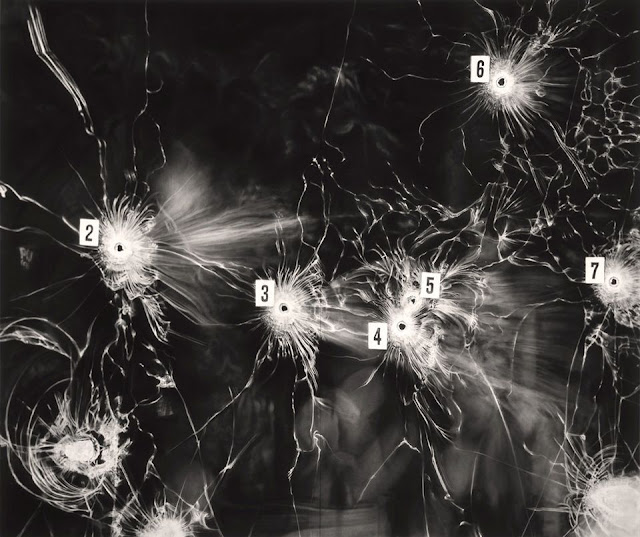 With so many big shows opening in the run-up to Frieze, it would be easy to omit the basement galleries under Somerset House’s East Wing, but that would be a mistake. Rather, you should take two hours out of the hurly-burly for this paradoxically uplifting exploration of melancholy. Inspired by WG Sebald, especially ‘On The Natural History of Destruction’, it starts with Durer, incorporates the WW2 bombing of Germany and unseen work by Tacita Dean and Anselm Kiefer among others, and pivots on a cinematic presentation of Guido Van der Werve’s hypnotic 54 minute film Number Twelve, Home, which starts on the hour and demands to be seen in full. Then you can ponder whether ‘in the description of the disaster’, as Sebald claimed, ‘lies the possibility of overcoming it’. 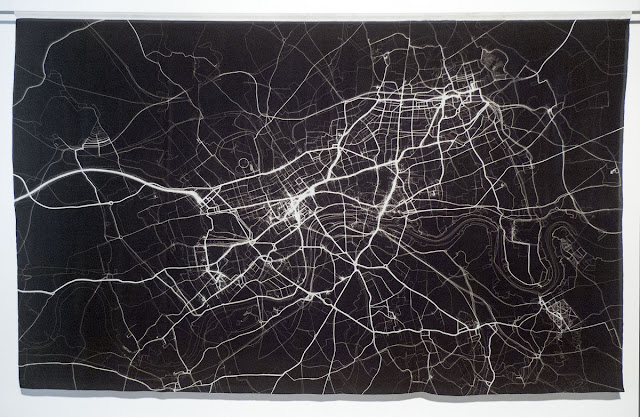 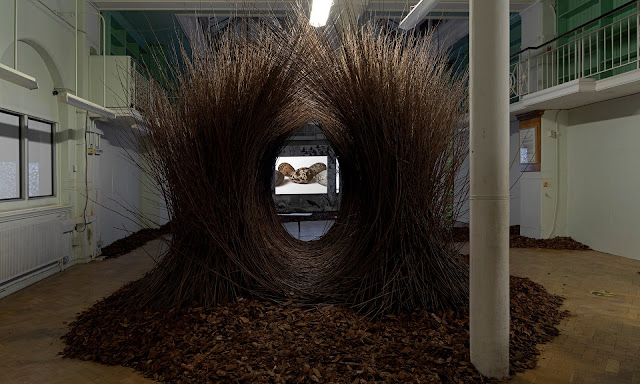 Andy Holden is one of our best artists, and Art Angel has an unrivalled track record the commissioning ambitious new work in unusual places… So it’s hardly a surprise that you should visit a disused Victorian library which was previously father and son-run Cuming Museum. There you will see Holden’s collaboration with his ornithologist father through two films with accompanying material and objects. First, 30 minutes on birds’ nests: how are they made and why do they take the form they do? How are the skills inherited? Might they possibly be art? What if Holden himself makes the nests? The other is a social history of collecting bird’s eggs – the latter stages of which are either a rogue’s gallery or sad case studies of obsessives born out of time (alongside one of the most notorious illegal collections is displayed). This is fascinating and also leads us to reflect on what we take from our parents, to what extent we can escape it, the difference between instinct and art, and what is real here, and what (like the collection of eggs) is not. 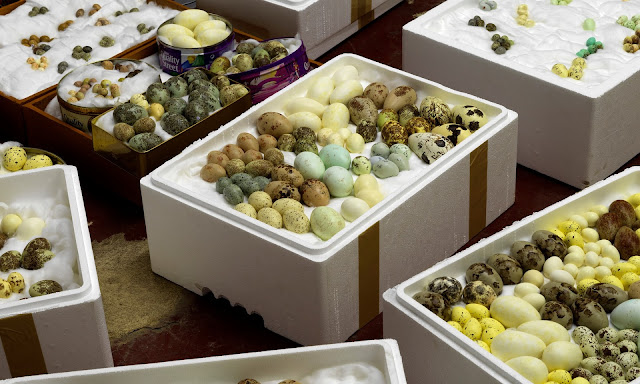 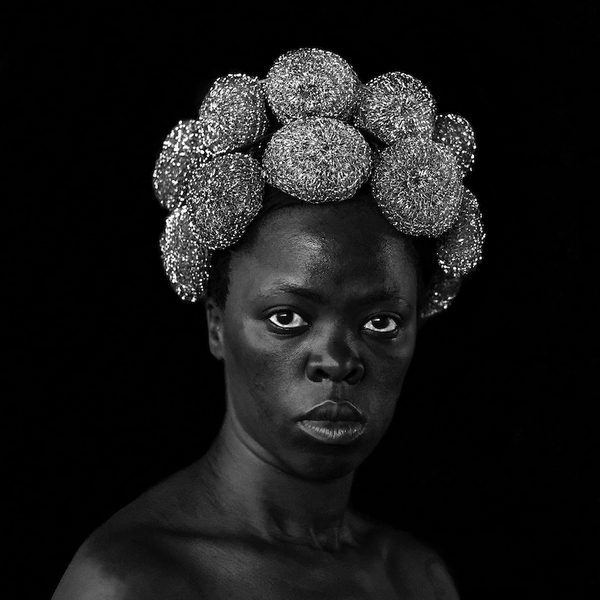 Zanele Muholi’s Faces and Phases portraits (from 2006 ongoing) asserting the presence of the black LGBTQI community in South Africa have been widely shown, but here we have only 70-odd self-portraits from 2014-17. Is there room for more such work in the post-Sherman, post-selfie age? This tremendous double exhibition – of her ‘Dark Lioness’ series, and newly commissioned images of Muholi in a kimono in Kyoto and a former prison in Johannesburg – proves there is. Race, class and personal history are more prominent than sexual identity as Muholi intensifies her blackness by increasing the contrast in black and white photographs and uses potentially absurd yet aesthetically potent props to clue us into back-narratives. The scouring pad hat of Bester V. Mayotte, for example, both dignifies and critiques her mother’s lifetime of domestic labour; while Basizeni XI uses tyres to haunt the memorialising of her late sister with colonial rubber production and execution by ‘necklacing’. 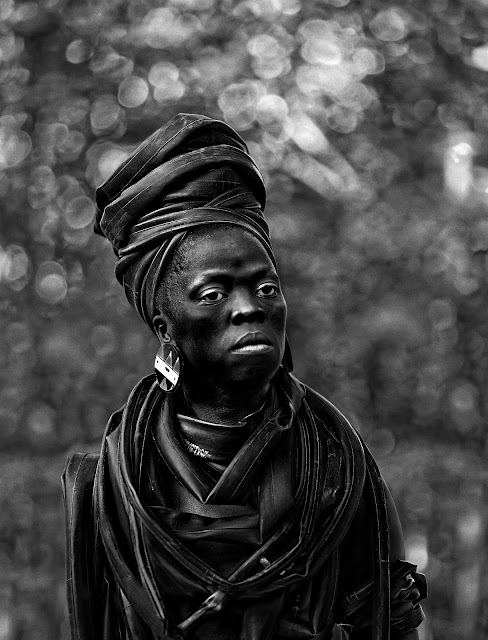 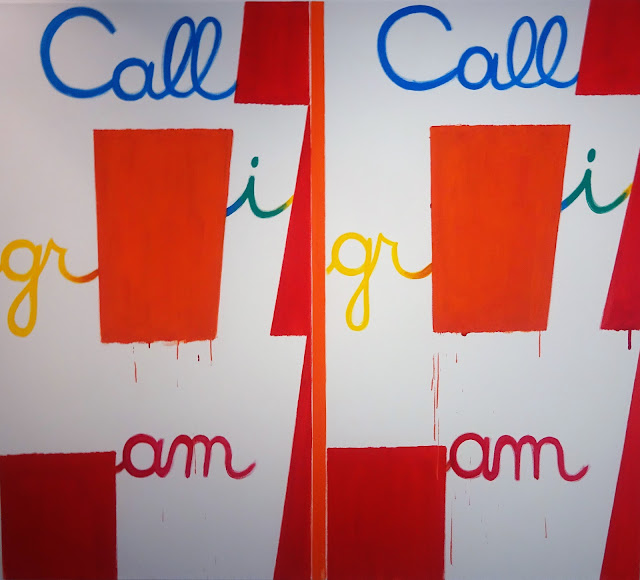 ‘Is he still doing the same old double thing?’ Asked one painter when I mentioned Bernard Piffareti. And it’s true, the French artist’s first London solo plays several new canvases against several older ones, all using the method he’s followed since 1986: choose a size and shape of canvas, choose an acrylic colour (he never mixes them), use it to paint a vertical spine down the centre, and then proceed to paint either side similarly. It turns out there’s plenty to play off in that set-up, one being the back and forth caused by the slight differences between halves, another the unanswerable puzzle which has temporal or hierarchical primacy. Examples here include wall-like, road-like and floral modes, as well as the small, circular ‘Tableaux en negative’, which suggest a snapshot of part only of a larger painting, the two halves diverging notably from symmetry by capturing different aspects. There’s also a text painting, which rearranges the show’s title – ‘Calligram’ – to form a decorative pattern. It’s a whole world, and maybe all the paintings – says Piffaretti, are just one large painting. ‘And you’, I asked back, ‘are you still doing the same old single thing?’ 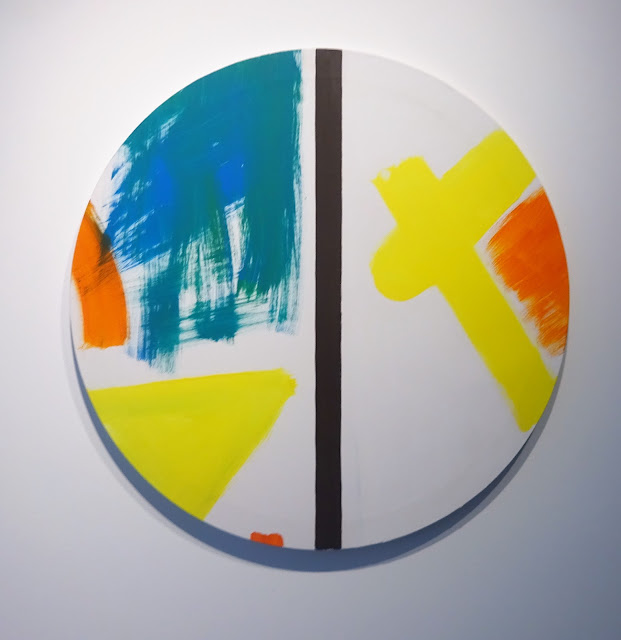 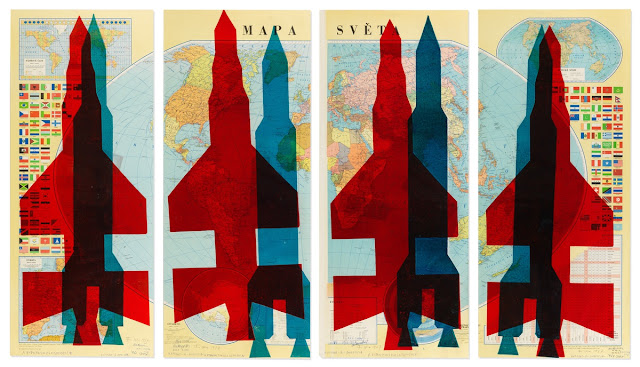 Map of the World (Rockets), 1967 – monotype on map, 95 x 180cm
Lucia Gregorova Stach, of Slovakia’s national gallery, has curated this show of 1960’s work by the second most famous Slovakian conceptualist after Julius Koller. She pitches him as somewhere between Beuys (Filko has a foundation myth of becoming an artist following a near-death experience in a munitions factory) and Kabakov (he’s an oblique satirist of the communist state). Thus Filko (1937-2015) displays proposals for buildings, cobbled together anti-monumentally from found metal so that they dominate an image of the Bratislava skyline’s socialist utopia. He pitches red blood against blue cosmos, male rockets against cavorting women in a pop-style assertion of erotic over political against the collage background of a world map – which his work, unlike his small country but consistent with what was apparently a big personality, threatens to usurp. 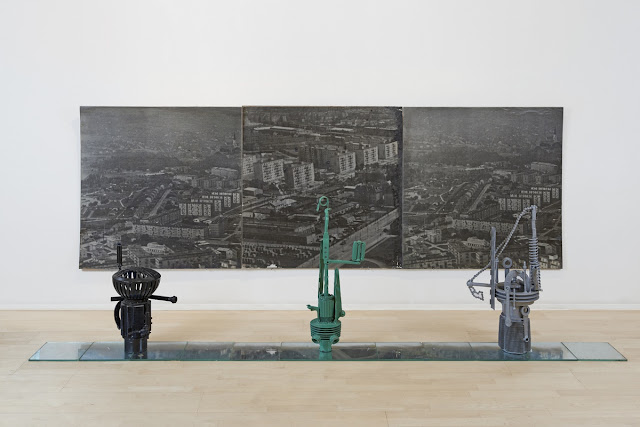 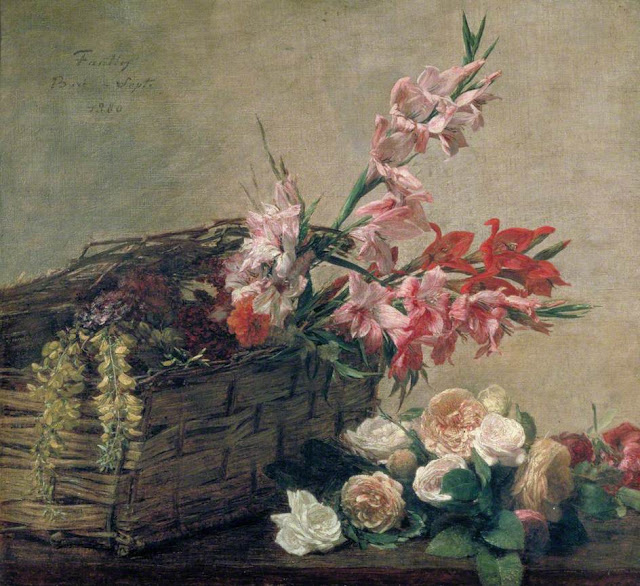 The large but little known Guildhall Art Gallery has a significant collection of Victorian paintings, currently complemented by and integrated with over 100 contemporary still lives. They provide new spins on flora, vanitas, food and domestic objects in a show – organised by Peckham’s MOCA – which toured the world three years before arriving in London. You’ll find, Andro Semeiko’s 1.5m square  “Very big chocolate cake”, a tribute to potential excess, more healthily topped by a 2 m high painting of cherries by Martin Gustavsson; and library of woodland books by Conrad Bakker; a Fright Wig made from household dust by Paul Hazelton; Caroline McCarthy’s image of a skull made from Ben-Day dots punched out of a binbag hung next to it, waste to waste, and two classic Fantin-Latour florals – while both Philip Pirolo and Michael Petry (also the lead curator) make striking works which equate flower and anus.

Michael Petry: Red Roses, 2009 – one of three blown glass and cut flower arrangements in which the rim of the vase is taken from online submission of anus shapes, and each flower choice represents a man’s sexual preferences via the 1970’s gay hanky colour code. 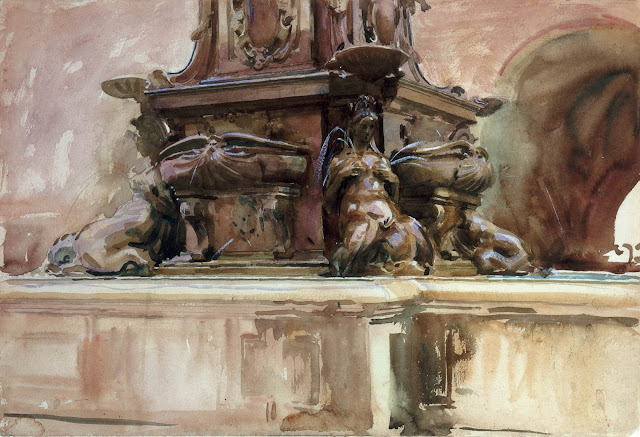 80 works show John Singer Sargent relaxing into watercolour during 1900-18, largely for his own pleasure and often linked to travel tied into his more lucrative work, with Venice, Southern Europe and the Middle East prominent. The best (which is to say, most) have unexpected subjects or viewpoints allied to a tight structure with contrastingly loose and often surprising application of colour. And there’s magic in, for example, the way he can transmit a sense of hot or cool temperature; depict rocks under water with the convincing economy of means; suggest his own movement as he paints from a gondola, or blend figures into the pattern of a landscape. 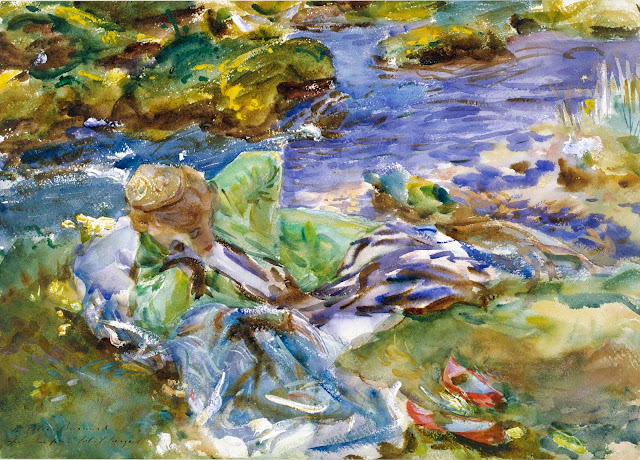