The Watts Gallery, near Guilford, with one of very few art spaces in Britain that is basically dedicated to a single artist. Equivalents, perhaps, are Leighton House in Kensington, the Stanley Spencer Gallery in Cookham, and maybe – just maybe – Damien Hirst’s splendid new gallery in Newport Street, Vauxhall. There, however, the great Damien has been careful to show work by artists other than himself, though most of what is on view comes from his own collection.

The current show at The Watts Gallery does, in fact, consist entirely of work by Watts himself, with a number of major loans from elsewhere to bulk up the gallery’s own holdings of his work. It doesn’t quite live up to its grandiose subtitle – ‘England’s Michelangelo’ – but does suggest that this currently somewhat neglected Eminent Victorian is well worth a second, or even a third, look.

Watts received major honours in his lifetime – some of them surprising. In 1884, for example, he was the first living artist to be given a solo show at the Metropolitan Museum in New York.

However, he never made any real impact at the annual exhibitions held at the Royal Academy. The compact biography by Nicolas Tromans published this year by Paul Holberton Publishing describes him as having only a ‘limited and messy’ relationship with this institution, so central to the High Victorian art world.

After his death in 1905, his reputation swiftly declined. The Bloomsberries had a family connection with him. Vanessa Bell and Virginia Woolf visited him as girls and Vanessa was, in 1903, briefly his student. When Virginia visited the R.A. memorial exhibition in 1905, she reported thus: 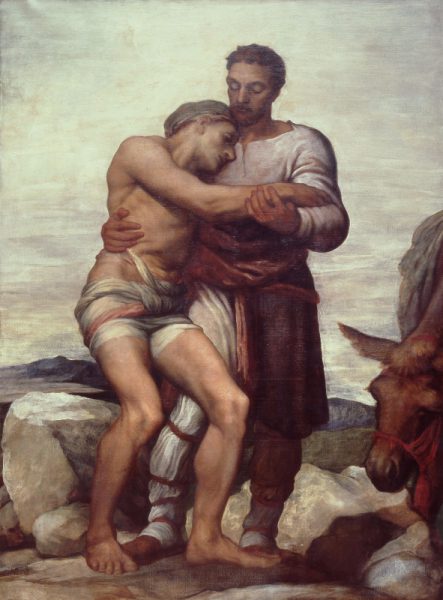 ‘The Watts show is atrocious; my last illusion is gone. Nessa and I walked through the rooms almost in tears. Some of his work – indeed most of it – is quite childlike.’

Despite this, Watts has in fact left substantial traces behind him. He was a sculptor as well as a painter, and his equestrian group Physical Energy is a familiar presence in Kensington Gardens, though I doubt is many people can immediately name the artist. It was installed after Watts; death, in 1907, and is based on a memorial to the great imperialist Cecil Rhodes, on Table Mountain in South Africa. Watts said that the statue was ‘a symbol of the restless physical impulse to seek out the still unachieved in the domain of physical things.’ The Watts Gallery offers a looming full-size plaster modello.

In addition, Watts left a considerable historical legacy in the form of solidly convincing portraits of his eminent contemporaries. The National Portrait Gallery has a number of these, given or bequeathed by the artist, who intended them to form a national ‘Hall of Fame’.

For me, however, the most interesting exhibits are the ‘subject’, allegorical works. Watts was an admirer of William Blake, and in addition to this influence, some paintings have much in common with turn of the 19th century Symbolism. One can also see one or two compositions, such as The Minotaur – a giant with a bull’s head, staring out the sea over imprisoning ramparts, as precursors of Surrealism.

Watts, probably, wouldn’t have got this. For him The Minotaur was a moral emblem, a direct successor of the little designs found in 16th-century emblem books, and, in this case, a specific immediate response to W.T. Stead’s exposé of child prostitution in London, The Maiden Tribute of Modern Babylon, published in 1885. As the new biography of Watts just mentioned tells us:

‘By giving us, the viewer, a perspective on the newly arriving human sacrifices that is shared by the monster – whose soft cow-eye areas depict those of a pathetic addict of self-indulgence as an evil genius – we are compelled to share its guilt.’

When one considers the simplistic moralising to be found in so many supposedly avant-garde works being made and exhibited right now, Watts does seem surprisingly contemporary. Not always in a good way.