Gauguin both is and isn’t a hero for our time. In one sense it’s brave of the National Gallery to mount a big show of his work in the /MeToo era. It’s hard to think of any artist, of the immediately Pre-Modern or Early Modern epochs, who behaved worse to women. Picasso and Modigliani were innocents by comparison. Gauguin, in the latter part of his career, when he went off to the South Seas, was a typically colonialist figure, borrowing from a culture very different from his own, without fully understanding it.

Yet the fact is, as the NG exhibition amply demonstrates, that he was a significant figure, whose work demonstrated a shift in sensibility that made him a precursor of our contemporary sensibility. Like Van Gogh, with whom he briefly allied himself, Gauguin was very much an autobiographical artist. His work – paintings, drawings, prints, sculptures. He was the centre of an entirely personal universe. Everything in it revolved around him. 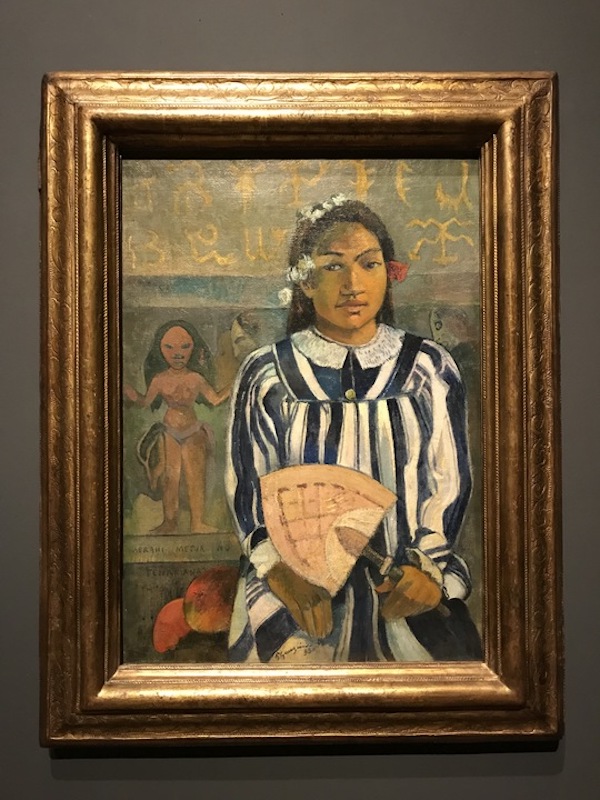 Gauguin painted numerous self-portraits, as indeed did Van Gogh. The European artists of the past had produced these self-likenesses, but not usually in quantity. The only painters of the Old Master epoch who produced self-portraits in series were – first of all, and obviously – Rembrandt. And now, as we have maybe begun to discover, Artemisia Gentileschi. Gauguin and Van Gogh gave artists permission to examine and celebrate the self. In recent times, painters have been eager to exploit what these two pioneers offered. Among them have been the German Neo-Expressionist Georg Baselitz and our own Tracey Emin. In these two latter cases, it has often seemed as if the artist concerned was willing to create nothing else.

In some ways, this obsessive production of self-images has been due to what has happened to Western art in general, and perhaps very specifically to painting. As a means of making a representation of the external world, painting has been increasingly challenged by other ways of making images, and specifically by photography. At the same time, there has been an obsessive interest in the inner self, due perhaps to the theories and researches of Freud, Jung and their contemporaries and followers. In these circumstances, every work of art becomes an act of self-revelation, a doorway that leads us to its creator’s innermost being.

The Gauguin show, interestingly, has not been able to resist the tug of this kind of theorising. In one of its later rooms, you will encounter some flower-pieces, which the labelling tells you, represent the personalities of people Gauguin knew. Or whom, though they were now dead, he had known well in earlier stages of his career.

One of the merits of the exhibition is that after a first room of self-portraits, it follows a pretty strict chronological course, and thus gives you a clear narrative of Gauguin’s development as an artist. One learns that he was a slow beginner – a bourgeois businessman with a family, who at a certain point, committed himself wholly to art. The sequence of rooms also Gauguin moving further and further away from the centre of the French art world as it then existed. First to bohemian life in Brittany. Then to Arles in Provence, where he briefly shared a house with Van Gogh. Then two visits to Tahiti, with an interval in Paris. Finally, to the remote Marquesas, where he died in 1903, aged 54. The fame Gauguin now enjoys arrived only after his death.

It’s a striking biography, by turns romantic and tragic, marked by Gauguin’s stubborn determination to go his own way. In this sense, it fits the myth, developed by the Romantic Movement during the earlier part of the 19th century, that artistic creativity was a tragic gift, a burden to be endured.

What it doesn’t fit with is our current cult of respect for indigenous cultures. What Gauguin found in the South Seas he manipulated to suit himself. He made lusty use of very young indigenous women, underage for sexual relationships – that is, in our contemporary terms. One wonders how many of these girls he infected with syphilis from which he probably died.

One of the most striking works on view comes from comparatively late in Gauguin’s career. It is called Merahi metua no Tehamana (Tehamana Has Many Parents), and its subject is the Tahitian girl in her mid-teens whom Gauguin took as his local ‘wife’ during his first stay in Tahiti. The exhibition handbook describes the painting thus: “Depicting her gazing forward and wearing a missionary dress, he surrounds her with enigmatic spiritual referents.” These referents are a hodgepodge – glyphs taken from Easter Island tablets, hovering heads that represent Tahitian spirits of the dead. As the catalogue text describing the work points out: “the portrait merges a colonial present with a mysterious, fictionalised mythic past.” In other words, Gauguin went there and threw together what he found without knowing too much. It is a marvellous image and a monument to cultural appropriation.