This story could have started a few months ago on the Gion Tatsumi bridge in Kyoto, Japan, or a long time ago on a lazy afternoon at Lucie Rie’s studio in London. Matthew Hall, the director of Erskine, Hall & Coe Gallery has the answer.

Urushi, possesses an appearance of depth that is a borderline between interior and exterior

His gallery is situated off Bond Street, on the first floor in the magnificent Royal Arcade. The all-glass gallery flooded with natural light gives the perfect view to the arcade. Hall has a sharp eye on contemporary ceramics, long way from that 19-year-old, jobless, unqualified boy that he was back in the late 80s. Meeting Lucie Rie and her art was at the time an eye-opener revelation. Hall subsequently joined the Galerie Besson, which their artists considered as a home. When it closed down, Hall with the help of a financial backer, the astute businessman James Erskine opened a new gallery in 2011, Erskine, Hall & Coe.

The gallery currently represents artists in contemporary and 20th Century ceramics, and also looks at the interplay between ceramics and two-dimensional art exhibiting work in other media such as metal, glass, occasionally accompanied by photography. There is Lucie Rie, Gwyn Hanssen Pigott, Ewen Henderson as well as Shozo Michikawa, Sara Flynn, Matt Wedel, Kohyama Yasuhisa and Claudi Casanovas amongst the represented contemporary artists. 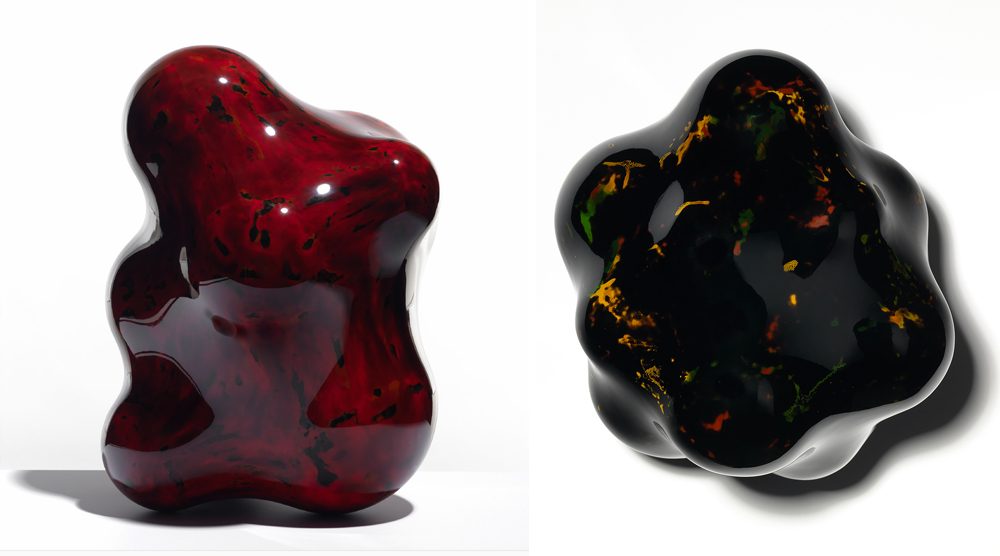 When last year Hall was visiting ARTCOURT Gallery from Osaka saw Ishizuka’s work for the first time and was so impressed by his organic sculptures and unique Urushi lacquering that he immediately proposed him a solo show in London.

Born in Kyoto, Genta Ishizuka earned his BFA from the Kyoto City University of Arts, during which time he participated in an exchange program at the Royal College of Art, in London, whose head at that time was Ron Arad. A couple of years later, in 2008, he completed his MFA at Kyoto City University of Arts and has been a freelance artist ever since. Having established a foundation in traditional Japanese decorative technique of Urushi lacquering, he developed his work from a unique perspective. 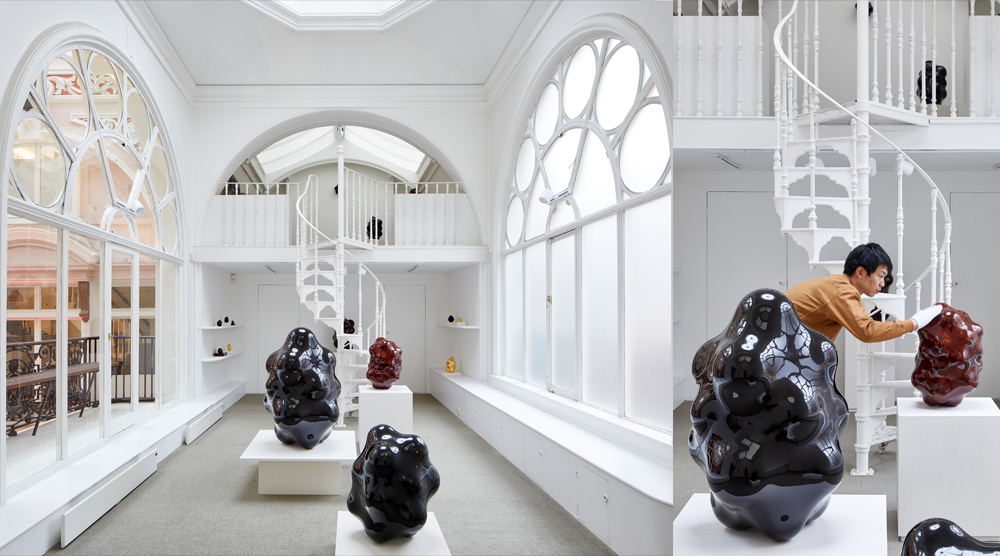 His current exhibition “Membrane” was inspired by the sculptural technique used in 7th to 8th Century Japan for creating Buddhist sculptures. Membrane comes from the word that is connected to both to the production method that utilizes elastic cloth, as well as applying the Urushi lacquering that covers the entire sculpture like a second skin. This word also has an affinity with the organic material of Urushi, and means a kind of skin, connoting physicality.

The membrane, which has a mirror-like gloss achieved from applying and polishing the Urushi, possesses an appearance of depth that is a borderline between interior and exterior, object and space, image and embodiment.

The works shown in the exhibition were made by wrapping styrene foam balls in an elastic fabric, creating three-dimensional curved surfaces that are then finished with Urushi lacquer using Kanshitsu-technique.

The Urushi refers to the sap drawn from the Urushi tree, which contains resin. Tapped, processed and applied to the substrate by brush or spatula in a series of thin layers, and when it exposed to moisture and air, it hardens and becomes lacquer. The hardened Urushi is glossy, robust and impervious to water and any other common substances; however, it has a vulnerability to light, especially to UV light that needs to be remembered when displaying or caring an Urushi object. 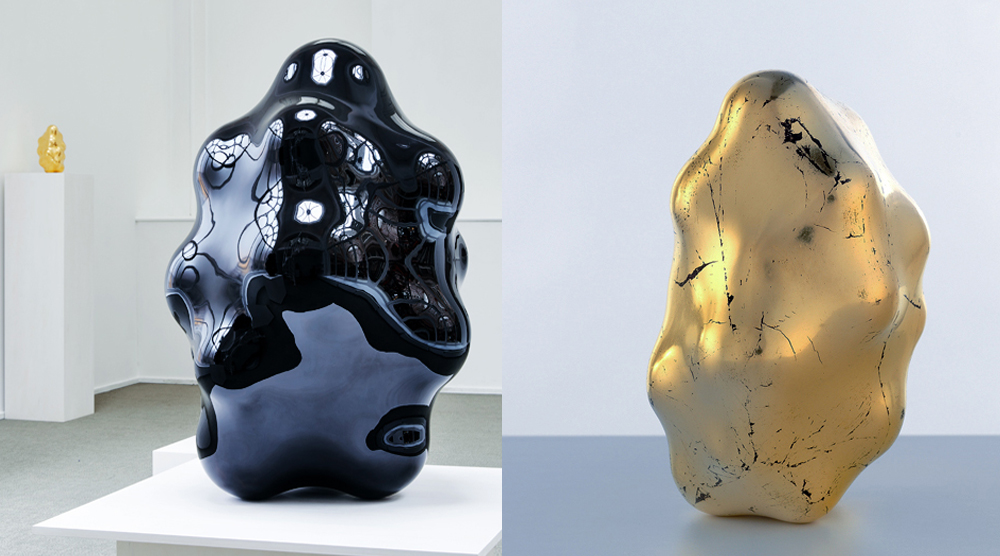 The larger works are made by the Kanshitsu-technique (dry-lacquer), a traditional Japanese method of forming a sculptural figure like papier-mâché, by applying successive layers of adhesive, impregnated material over a mould. Kanshitsu, however, differs from papier-mâché in that the material used is hemp cloth soaked with lacquer rather than paper, and when linen is bonded to the foundation, it is hardened with Urushi. Hardening followed by polishing with whetstones and charcoal between applications ensures that the surface remains smooth.

During the application process, several layers of pure, clear or colour pigmented Urushi can be applied. Where gold foil is used, it is applicated at the final step as an adhesive.

All of it is very challenging and time-consuming.

Ishizuka was deeply inspired to make these works when he saw oranges being sold in mesh bags at the local market of Kyoto. The oranges and the netting created a single form by way of the relationship between its interior and exterior, and he wanted to incorporate this relation into his work. By embedding a heteronomous agency into the formation of the work, he believed it would bring forth an inevitable expression of the Urushi.

In practical terms, this means that rather than setting out with a fixed idea of what he intends to make, he responds dynamically to the movement of the polystyrene spheres and once the substrate has hardened, the Urushi is applied and polished, the dialogue with the object evolves in front of him.

For a short month, the Royal Arcade is once again filled with a light breeze from Japan, tradition and Ishizuka’s extraordinary body of work.