The Queen’s Gallery, behind Buckingham Palace, is the place where the British Royal Collection Trust displays its treasures. The latest exhibition there – George IV: Art and Spectacle – is a particularly splendid example. George IV, alias the Prince Regent, was, next to Charles I, the greatest collector of art in the history of the British monarchy.

The times he lived through – the French Revolution and its aftermath, brought with them an immense dispersal of works of art. As the exhibition now at the Queen’s Gallery demonstrates, he was not slow to take advantage of this. In particular, he bought works by leading 17th century Dutch and Flemish painters, their reputations sagely established by the French aristocracy who were now being forced to give them up. His most expensive acquisition of this type, Rembrandt’s double portrait of The Shipbuilder and His Wife, duly included in the current show, cost him then enormous sum of 5,000 guineas when he bought it in 1811. That is to say, in the very midst of the Napoleonic wars. 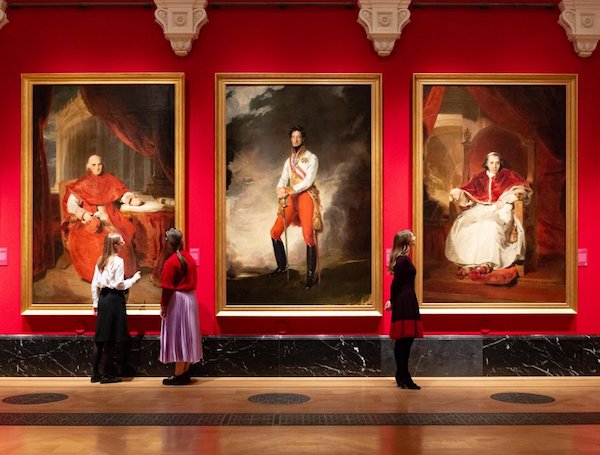 He was also not slow to snap up prime examples of decorative art that had once been in possession of the French aristocracy. If you like really posh furniture and decorative arts, here they are.

Collecting art was not the limit of his activities. The Prince Regent, later King, was responsible for commissioning works of art from the leading British painters of his time. At the core of the exhibition are some of the paintings that he commissioned from Thomas Lawrence, for the Waterloo Chamber at Windsor Castle. They celebrate the coalition of powers that finally defeated Napoleon. Prominent among them are splendid full-length images of Pope Pius VII and of Ercole, Cardinal Consalvi, who was the Pope’s representative at the Congress of Vienna, which agreed the post-war settlement following Napoleon’s defeat. Consalvi persuaded the allies to restore the Papal States in their entirety to the Church – with the sole exception of Avignon.

Given that Britain was still a Protestant power, the presence of these two Roman ecclesiastics may come as a surprise. The exhibition also includes a portrait drawing by Richard Cosway of Maria Fitzherbert, very recently acquired for the Royal Collection. She was the young Prince Regent’s illegally married morganatic wife – illegal because she was a Roman Catholic. In the portrait, she wears a necklace with an image of her lover. The drawing was commissioned by the Prince in 1789, as a present for its subject.

As is notorious, the Prince, later King, was not lucky in love, though during his life he had quite a number of mistresses. He married only once, so disastrously that the lady is not represented here. She was Caroline of Brunswick, from a German ducal house. The spouses never met before they married, and when they did meet, they disliked one another on sight. George got drunk to get him through his wedding night. They made one child, Princess Charlotte, who died at the age of 21, long before her father.

Caroline of Brunswick also outlived her daughter. When he became King, her husband attempted and failed, to get rid of her by Act of Parliament. Caroline, in return, tried to crash into the coronation service on 19 July 1821. She failed, fell ill, and died just three weeks later. There was a triumphal funeral procession through London, in the pouring rain, as her body began its journey home to Brunswick. On its way to Harwich, her coffin was halted by the authorities, who insisted on detaching the silver coffin plate, which remained in possession of the person in charge of the escort – as it happens, this person was one of my ancestors. The plate reads ‘Caroline of Brunswick, Injured Wife of George IV.’ As far as I know, it remains in the hands of distant cousins of mine. This object would have made an excellent addition to the show now at Buck House. Caroline’s grave in Brunswick bears a similar inscription.