In 1938 a member of the American Abstract Artists Group, Ibram Lassaw, published an essay in the American Artists’ Yearbook in which he put forward the central credos of inter-war abstraction, arguing that painting’s status was ‘its own reality’ and not simply a secondary depiction of external reality.

Its power existed in its ability to express direct emotion while re-inventing art from first principles. Artists were abandoning traditional styles and ways of working that came from different philosophical and psychological mindsets, as well as different technological eras. The important thing was for art to be alive, to be full of suggestions and possibilities. As Jürgen Habermas wrote in Modernity – An Incomplete Project – ‘modernity revolts again the normalising functions of tradition; modernity lives on the experience of rebelling against all that is normative’. This meant that through the final years of the last century and on into the early years of this one, painting that might be considered narrative were given little house room. Paint and its properties were the only stories in town.

But with Postmodernism’s deconstruction of modernist shibboleths, dogmas dissolved. Where abstraction had prevailed, artists began to find new ways to engage with figuration. One such is the British painter George Shaw, who embraced the liminal spaces of the council housing estate of his childhood to create paintings that, despite their pedestrian subject matter, suggest the Romantic sublime. Post-war, such estates promised those from inner cities and bomb-damaged tenements without proper sanitation a new Shangri-la. With their neat front gardens, indoor toilets and fitted kitchens, these neat little houses represented a utopia with plumbing. 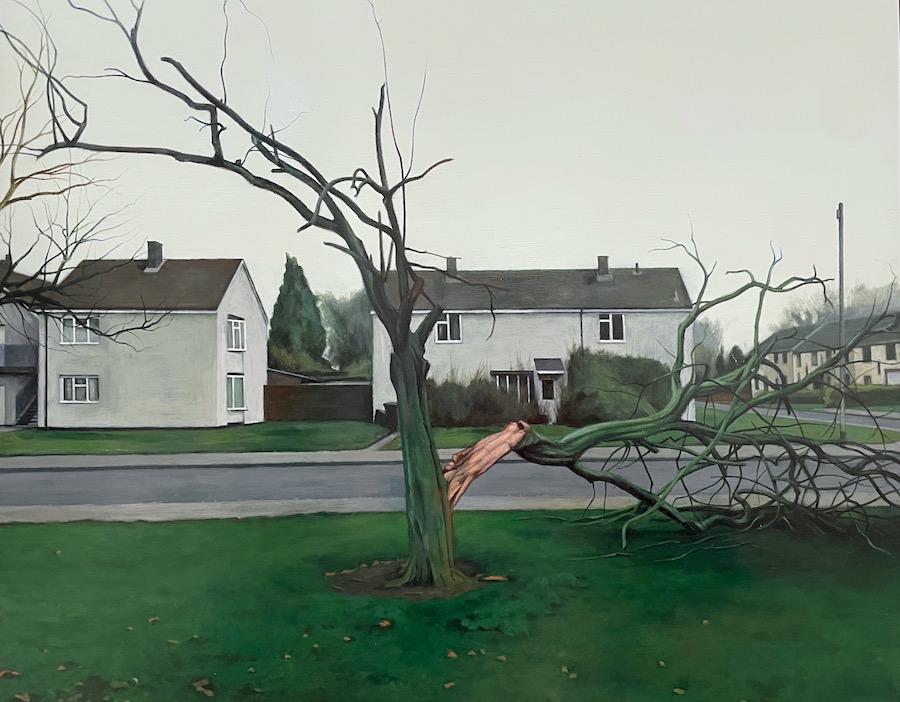 Built on brown sites and unproductive farmland, all the ticky-tacky boxes looked pretty much the same. These instant communities had neither history nor social links. A purpose-built pub or small local shop might be the only nod towards the creation of anything communal. Most of the time, residents would have to get a bus into the local town to shop or go to school. That these estates soon became run down and blighted, their new concrete cracked, green mould and graffiti covering the walls, is of little surprise. And for the young, what was there? Nothing other than the boredom of hanging out by the garages kicking a football or a trip to the surrounding wasteland to smoke, snigger at dirty magazines and smoke a bit of dope.

Such was the backdrop to George Shaw’s early life before art took him to Sheffield Polytechnic and the Royal College of Art. After graduation, he came to attention with his paintings of Tile Hill, a suburb of Coventry, where he grew up in the 1970s, ‘The Local’, on show at The Box, Plymouth, is a reflection of the artist’s personal observations of isolation, loss and belonging narrated in three chapters. The first painting encountered is The New Romantic. A large oak tree with a heart sprayed in silver paint on its trunk. The references are multi-layered. There’s a nod to the youth culture of the early 1980s with its icons such as David Bowie, as well as to 18th century German Romanticism and British landscape painting. In Shaw’s childhood trees in the local woods acted as billboards, announcing the desires and frustrations of the local disaffected youth. At one time, this particular oak bore a swastika sprayed on its trunk in fluorescent green paint, later to be painted over with a bright yellow heart.

Shaw’s scenarios suggest existential isolation in their bleak emptiness. He is to the English council estate what Edward Hopper was to the American diner. Yet while Hopper’s paintings included lost souls such as the Nighthawks in a nearly empty dinner, Shaw’s paintings are mostly devoid of people. We find ourselves asking about the lives of those we cannot see. What invisible despair lurks behind the net curtains? What broken dreams are suggested by Injury Time, 2019, a painting where a storm-snapped tree stands centre stage on a scruffy green verge in front of two small houses, enveloped by a grey sky. Everywhere there is a sense of absence, a sense of what has been lost. The small clusters of identical houses ooze wistfulness. Though not quite the romanticised longing that Wordsworth felt for his lost childhood days of ‘splendour in the grass, there is still a potent nostalgia here. A row of orange plastic fencing, along with some traffic cones, blocks off the entrance to a cul-de-sac of meagre houses. The image seems to suggest that the past can never be reclaimed, whilst elsewhere a section of the same orange fencing closes off a path that leads from the edge of the estate into a cluster of distant trees, conjuring up Rudyard Kipling’s lines: they shut the road through the woods/Seventy years ago.’ Fragility and transience are the hallmarks of Shaw’s work. 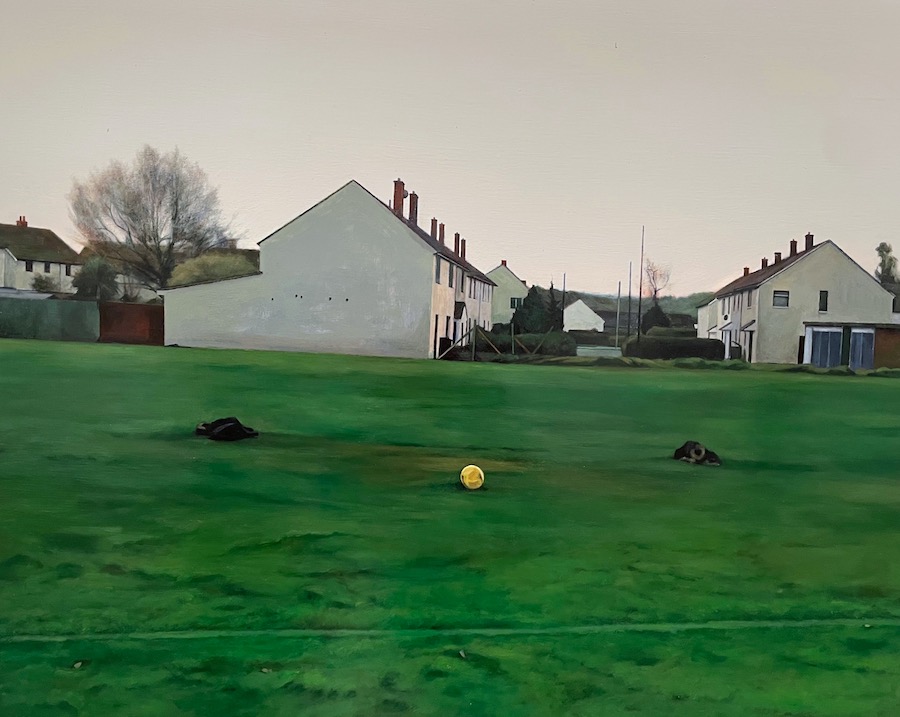 Titles are important to him. The painting of a lone football sitting in front of two little mounds of earth, the grim housing estate in the background, is entitled The Goal Mouth Revisited (2019-21). It’s not hard to imagine a clutch of scruffy little boys spending damp afternoons kicking a ball desultorily around this improvised pitch. Many works have the word ‘revisited’ in their title: The Subway Revisited, Sunday Evening Revisited and The Banana Flats Revisited (all 2019-2021). It is as if the artist were in perpetual search of some lost prelapsarian world. Besides looking back, he has said that the paintings anticipate a time when he will no longer be anywhere. ‘And there will be a time (closer and closer each day) when the world will be full of nothing but what the human leaves behind. I paint ghosts.’

The exhibition continues with a series of new paintings of the sky above his childhood home and a poignant group of meticulous drawings that focus on near-empty interiors and incidental objects – the row of coat hooks casting their shadows, a net curtain hanging in a window, the kitchen sink – made after the loss of his mother.

The last section of the exhibition introduces a series of paintings of Shaw seen from behind, walking along a country road, a path that leads from the old family home. Like the disappearing man, he becomes smaller through each painting until we are simply left with the road, an image of departure and inevitable demise. The fact that they are painted in Humbrol enamel paint, the sort he used as a boy to paint Airfix models and on shop signs, fairground rides and narrow boats, gives an added sense of the remembrance of things past.

Perhaps, less successful are the newer paintings of stone circles, sunrises and the laburnum in his Devon garden, painted through the lockdown. Though technically adroit, they lack the poetic potency of his council estate works, with their romantic dystopian melancholy. For what’s unique about Shaw’s best work is his ability to make paintings that resonate with stories of forgetting and remembering, establishing him as the visual Proust of suburbia.

George Shaw The Local The Box, Plymouth until 4th September 2020

Sue Hubbard is a freelance art critic, award-winning poet and novelist. Her fourth poetry collection, Swimming to Albania, is published by www.salmonpoetry.com. Her latest novel, Rainsongs, is published by Duckworth and her fourth, Flatlands, is due from Pushkin Press in 2023.