It is not often that one comes across a book on contemporary, or near contemporary, art that shifts one’s view of what it is, how it has developed, and that direction those developments are likely to take in future. Here, however, is one such book, relatively recently published by Laurence King Publishing here in London. The author is John J Curley, who is a prof at Wake Forest University, a privately funded institution located in Winston-Salem, North Carolina, so I suppose it counts as a transatlantic effort.

The title is Global Art and the Cold War, and the thesis the book puts forward is that contemporary art, since the end of World War II, has been intensely political. Despite the implications of his title, Curley does not see this as being the simple reflection of the conflict between two systems, capitalist and socialist. He covers a lot more than the cultural rivalry between the two rivals – America and Western Europe on the one hand, Russia and its satellites on the other. He covers a lot of ground in geographical terms: China, the Middle East, Latin America. Only India (one mention of M F Husain) and Pakistan are more or less left out. But then Curley isn’t trying to offer a general history of world art between the end of the war and the collapse of the Soviet Union. He is attempting, instead, to illuminate the complex dialogues between art and politics during the time surveyed. 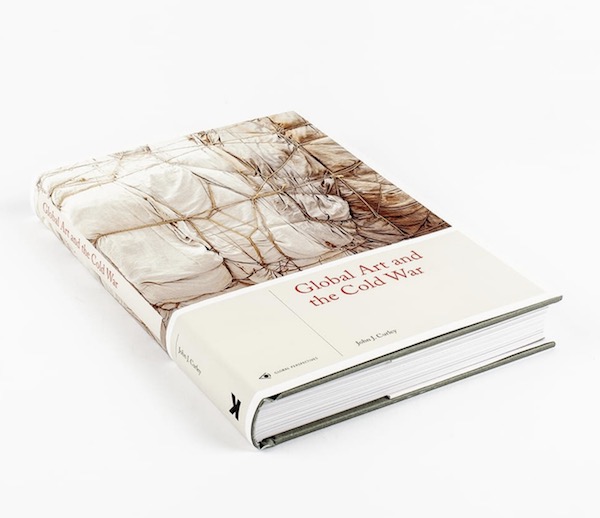 Most of the big, expected names get a mention, though abstract art tends to get short shrift. The political element in the Abstract Expressionist movement, popularised as an emblem of freedom of expression, and as being, in addition, a symbol of the dominance of American culture, does get full acknowledgment. The American Minimalist Movement of the late 1960s and 1970s is less fully treated. Curley has this to say of it:
‘Minimalist art, with its blankness, rigid geometries and industrial materials, also came to signify, for some European critics, complicity with American actions abroad.’

He illustrates this comment with one of Donald Judd’s sets of stacked boxes, fixed to the wall, and observations:
‘If an object like Untitled (DSS 123) could appear complicit with American Cold War aims, this was by no means Judd’s intention. The artist’s aesthetic evolved out of the theories of Clement Greenberg… Greenberg had required that paintings eschew traditional illusionism and reinforce their own status as physical objects…’

What this leaves out is that Minimalism, born in a democracy, was primarily an aristocratic style, privileging a detachment from society in favour of a purely aesthetic reaction to the art object, with any reference to its social context wholly excluded. This possibility was to be destroyed in due course by the rise of the Web, which made such exclusions impossible, while at the same time privileging the thing seen, the object or objects shown, over any verbal commentary that might accompany them. The world of Instagram lies just outside the scope of this book. It manifested itself in the mid-1990s – very soon after the Soviet Union fell apart.

What, in turn, Curley’s book leads one to conclude, without saying so directly, is that, while the Soviet Union did indeed collapse, due as much to its own weaknesses and social failures as to any external pressure, the idea of a socially engaged art lives on, and is gathering momentum today and not losing it. The degree to which Minimal Art now seems irrelevant offers proof. It is a historical moment, not a still living artistic force. The triumph of capitalism has, paradoxically, brought about the demise of fully capitalist art.

One fascinating feature of Global Art and the Cold War is that the artist who gets most mentions, plus three illustrations (more than any other artist included), is the Russian Ilya Kabakov. Who is he? Kabakov, born in 1933, is a Russian conceptual and installation artist, who now lives outside of Russia. In recent years he has worked in partnership with his wife, Emilia. From October 2017 to January 2018 they had a major show at Tate Modern. What was its title? Not Everyone Will Be Taken Into The Future. This exhibition afterward went on to the Tretyakov Museum in Moscow, where it closed on mid-January of this year. Who now represents the Kabakovs? The Pace Gallery, basically American, with worldwide locations: New York, London, Beijing, Hong Kong, Seoul, Palo Alto and Geneva. How times have changed! Or have they?

Photo: Ilya Kabakov Not Everyone Will Be Taken Into The Future  – John J Curley Global Art and The Cold War