Harrison Pearce meticulously constructs kinetic sculptural installations out of industrial machinery, silicon and rope. The clashes he sets up between these textures and shapes perfectly embody the conflicting forces of desire and menace I have come to associate with his art. His new work `Interview (prototype)’ is as beautiful as one of Brancusi’s semi-abstract forms, and as unpleasant as one of Giacometti’s `Disagreeable Objects’.

Spotlit in a darkened gallery and viewed to the sound of a haunting score by Nico Muhly, `Interview (prototype)’ is flagrantly theatrical. To see it, we mount a short flight of steps onto a wooden platform to find ourselves standing in what looks like a scientific laboratory where experiments are taking place on two large silicon eggs, each cradled in a hammock of netted rope. We watch with growing unease as robotic metal probes prod and push the soft ovoid shapes with such force that we can’t believe they won’t pierce the soft silicon skin. If you find yourself inadvertently wincing, it is because those hard metal spikes thrust into forms that are at once male and female, round as testicles, sensual as breasts. 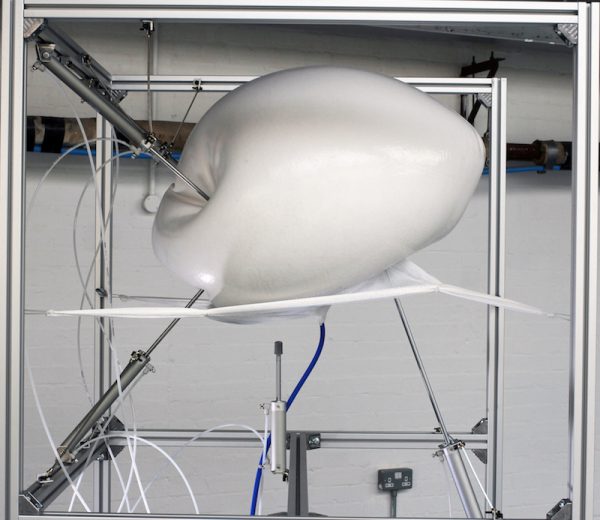 But that initial reading is only the first of several layers of possible allusion. The bags of silicon are shown in separate modules. Although they `face’ each other they never touch, raising the possibility that the artist imagines them not as external body parts but as embryonic entities – perhaps male spermatozoa cells trying to fertilize an ovum in the womb. At this point, we’ve moved into realms first explored by Matthew Barney in his Cremaster Cycle of films, where a central motif is the biological mechanism that determines the creation of sexual identity inside the womb. That nothing living can ever be born or created in Pearce’s conception is part of the inexplicable feeling of sadness that permeates the piece. Pearce has a dark sense of humour, certainly, but I left this exhibition with a sense of helplessness that had to do with the encroachment of scientific and technological advances on our humanity.

My first thought on seeing `Interview-prototype’ was of Eva Hesse. When I saw Hesse’s work for the first time in 1970, I knew at once that she was an artist of extraordinary stature that would be recognised in time. The same is true of Harrison Pearce. Just wait.

Richard Dorment is an art historian and exhibition organiser who worked as chief art critic for The Daily Telegraph from 1986 until 2015. In 2014 Dorment received a CBE in the New Year Honours for Services to the Arts.

Pearce recently graduated from his MA in Fine Art at City and Guilds of London Art School. This is his second solo show in London. He has exhibited in group shows alongside internationally recognised artists such as Gavin Turk and the Chapman Brothers. His work is held in a number of private collections. He is currently working on a major collaboration with composer Nico Muhly, whose opera Marnie opens at the ENO next month.

Interview (prototype) is on show at Dulwich College London, SE21 7LD by appointment until Wednesday 1st November. View by appointment Monday to Friday between 9am and 5pm. Email MulhollandSM@dulwich.org.uk to arrange a visit.