Rupert Edwards, Director of the recent Sky Arts documentary ‘Hard Beauty’, describes the film’s subject, Helaine Blumenfeld, ‘Britain’s most successful sculptor you have never heard of.’ The latter part of that statement may be about to change somewhat, to one in line with the former, as a result of Edwards’ film and Blumenfeld’s current ‘Tree of Life’ exhibition at Ely Cathedral.

Edwards argues that Blumenfeld is not better known, despite her obvious success, because her focus on beauty has always been at odds with the main foci of the contemporary art world. Demonstrations of the compelling beauty of her organic forms top and tail the film as first a group of schoolchildren and finally those present at the unveiling of ‘Tree of Life: Encounter’ cannot resist their own personal encounter with Blumenfeld’s works and rush to touch, feel and caress those same forms.

In following the creation of ‘Tree of Life: Encounter’ for the Woolf Institute, Edwards shows us Blumenfeld translating her vision for the work into a clay maquette, scaling up that piece to amplify the vision, before selecting a marble block for carving by her assistants in Pietrasanta, the Tuscan town in which she has since 1975 realised her sculptural visions. Cameraman Will Edwards mirrors and amplifies the hard beauty of Blumenfeld’s work in a film that combines effective documentary with scenes of ravishing and profound beauty whether in the heavenly light-white quarry at the summit of Monte Altissimo in the Apuan Alps or the prosaic yet complex movements of man and machine in raising Blumenfeld’s 10ft marble sculpture from a prostrate to standing position. 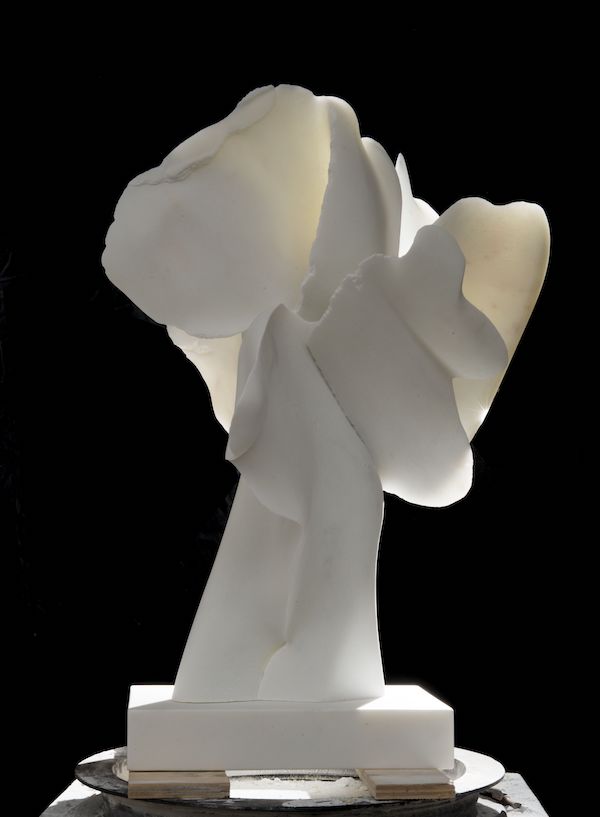 If Blumenfeld’s focus on beauty is one factor distancing her from a greater level of recognition in the world of contemporary art, then spirituality may be another. The film emphasises the extent to which Blumenfeld’s natural forms are also visionary. From an early age Blumenfeld has received the forms she now shapes into sculpture through her dreams. Clay is used as her malleable medium in which to capture what remains of these dreams before they fade.

In describing the inspiration for her first ‘Tree of Life’ sculpture, Blumenfeld has said: “I found myself creating a sculpture that began with what looked like the trunk of a tree formed by many bodies twisted and turning, combining and informing the trunk. I realised as I was completing it that it represented the victims of the Holocaust. However, instead of disappearing in smoke, the trunk moved upward and opened into a panoply of branches with regrowth of blossoms, and clouds of many leaves, creating a sense of hope. I was trying to express that; although there had been almost unbelievable destruction, there could still be renewal and regeneration. These bodies were vanishing, but their loss might provoke society to respond with greater compassion and greater creativity.”

This vision was itself derived from a statement made by Blumenfeld’s mother that many Holocaust memorials have a ‘total absence of spirituality’.
A forest of ‘Tree of Life’ sculptures can be found among the pillars in the nave at Ely Cathedral, alongside a bronze ‘Tree of Life: Encounter’ and a range of other works which, through the fluid grace of their upward flow, help us transcend our perspectives and, in Blumenfeld’s own words, revive belief in something higher and more meaningful than material success.

‘Hard Beauty’, the first film about the life and work of sculptor Helaine Blumenfeld, OBE, premiered on Sky Arts in April 2018.