Is the Finnish painter Helene Schjerfbeck (1862-1946) the most fascinating artist the anglophone world has never heard of? The fashionable preoccupation with women artists of past and present is throwing up and out some real discoveries and rediscoveries.

For obvious reasons, Finland, however remarkable a nation, is not all that prominent on the cultural stage of the west. It is a big country with a small population, a contentious past, split cultures and vexed histories and Finnish, like Hungarian, and Basque is not an Indo-European language but sui generis. It only stopped being part of Sweden in 1809, when it was ceded to Russia as one of the many deals and treaties that took place in the Napoleonic era. From then on though it was an autonomous duchy under Russian rule. It was the fall-out from another war, that won Finland its final independence in 1917. And its role in World War II was also a difficult and perplexing one, siding with Germany as an ally against Russia and then finally coming in 1945 on the Allied side.

The tour de force is a gallery of self-portraits from the 1880s to the year of her death.

So in both geographical and cultural senses, it is a country of climatic extremes somewhat on the fringes of Europe. Yet it also has one international composer, Sibelius, a handful of world-famous architects from the Saarinens to Aalto, is world-famous for its post-war design and architecture, and perhaps more surprisingly currently has a host of classical composers, conductors and musicians on the world stage (most educated at the Sibelius Academy) , not to mention world-class music festivals. But Finland has hardly any internationally known painters – Akseli Gallen-Kallela anyone?- making its national gallery the Ateneum, a mini revelation. 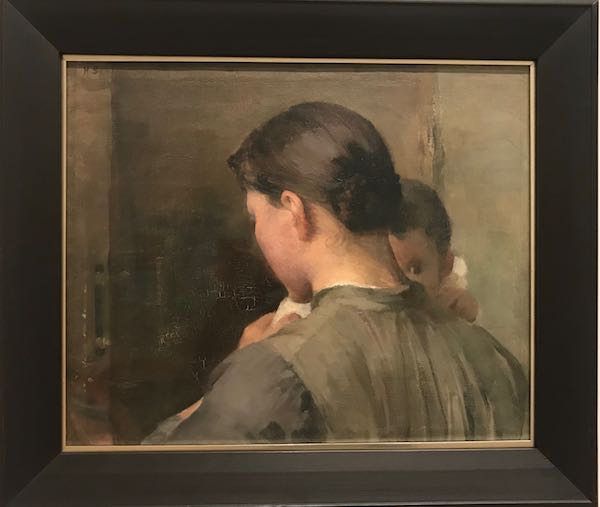 Helene Schjerfbeck Woman with a Child 1887

And so here comes Schjerfbeck, her introspective psychology, her seemingly circumscribed life in spite of her precocity and sojourns in Paris, Pont-Aven and even St Ives. She was multilingual, Swedish her first language, reading widely particularly in French, as well as English, and German. Her extraordinary range of fifty years of self-portraiture, speaking to our current preoccupations with looking at inner lives for good and ill. And other Nordic cultures fit right in: Munch’s The Scream is one of the most famous images in the world, and his introspection, even narcissism, and his difficulty with personal relationships, work ethic and long life, not totally dissimilar.

Schjerfbeck is also prolific. There are some 750 surviving paintings, and it is thought she produced some thousand works of art. She remarked early on that dreaming did not suit her, to work was her path; and yet paradoxically much of her later work is dreamlike in effect.

Her biography is pertinent and strange; a fall down the stairs when a young child aged 3 or 4, resulted in a broken hip which badly set caused a permanent limp and pain throughout her life, in her early years, in fact, she was not well enough to go to school and was homeschooled, drawing materials were her salvation, ‘Give the gift of a pencil’, she suggested later on, ‘and you give life’. Schjerfbeck was precocious, her talent recognised early with scholarships as an adolescent to the leading art academy in Helsinki and by the time she was 18 she was on her way, officially subsidised, to study in Paris. For the following dozen years or so she not only spent substantial time in Paris but in between occasionally returning home, visited great collections in Florence, Vienna, and St Petersburg, where she copied masterpieces in the Hermitage, and also painted in Normandy and Cornwall. She also got engaged to an unknown artist – when he broke off the attachment she forbade his name ever to be mentioned again.

She was to teach in Helsinki before retreating to a town north of the capital where she took care of her mother, not leaving for fifteen years. However, giving up both travel and teaching she began an extraordinarily productive period in terms both of production and evolving style, an individual semi abstraction. For the rest of her life, her sales increased, she was slowly recognised and publicly honoured. Bouts of continued ill-health punctuated the succeeding decades mostly spent outside Helsinki; and she was to die finally in Sweden, at the age of 83 with an easel by her bedside. 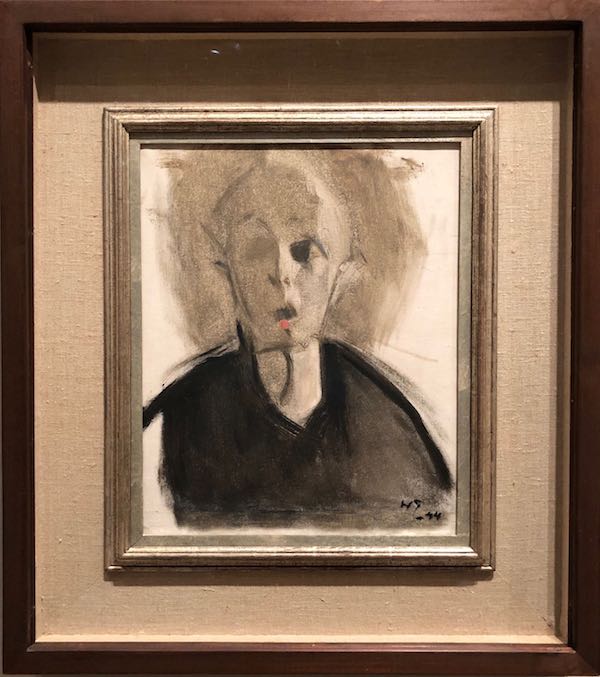 But what of the art? Landscapes, still life, genre, portraits and self-portraits poured forth. The early work is naturalistic, seaside scenes, laundry drying on the grass, the interior of a bakery, and charming portraits: a child convalescent, a fellow woman artist, a young woman holding a child. They are gently affectionate, quietly charming, part of the zeitgeist, original in their choice of subject matter, more conventional in execution, and memorable.

Slowly the idiom is pared down, almost minimalist, the subject matter almost exclusively portraiture, sometimes commissioned, friends, models, her mother and herself. The subjects are in profile, or full-face sometimes with eyes closed or gazing down, even turned away: Maria, 1909, is dressed in white, three-quarters turned away, a book on her lap, no discernible facial feature visible.

The tour de force is a gallery of self-portraits from the 1880s to the year of her death. Early on the idiom is charmingly academic, wistful and poignant. Her gaze becomes more direct, observant, even mesmerising, curious too, her eyebrows raised, questioning her reflection. Details disappear, and over decades, the face more haunted also as it becomes more masklike as she somehow retreats even from herself. It is a devastating self-analysis, seemingly of a life which eventually became at one remove from reality and expressed only in oil on canvas.