Modern psychology has shown considerable interest in understanding the self. Investigations into the problems of selfhood spread during the 20th century from clinicians and humanistic psychologists to be explored in laboratories and by artists. The individual search for personal fulfilment (self-actualisation) became, in an increasingly secular society, accepted as a legitimate and vital quest. Kant, Descartes and even the ancient thinkers all grappled with it. But the concern to understand the problems of selfhood is essentially a modern phenomenon. With the death of God, Modernism sought to place the self at the centre of the lived experience. From the investigations carried out by Freud and Jung into the dark continent of the unconscious, through the Surrealists to the psychedelic counter-culture of the 1960s, a search for the self-became a central 20th-century quest.

Michaux wanted to fabricate reality rather than reproduce it

As a young man, Henri Michaux, born in 1899 in Namure, Belgium, discovered that to pursue self-knowledge he would first have to free himself from the socio-cultural barriers that shaped his thinking. A somewhat unclassifiable figure, over the course of a long life, he influenced – despite his crippling shyness – both artists and writers and was lionized by the likes of André Gide and Francis Bacon. Very much a ‘poet’s poet’ and a ‘painter’s painter’, he produced thousands of works on paper, the full extent of which is now only becoming apparent. Many not been seen before are now on show in this new exhibition at The Guggenheim, Bilbao.

Organised in collaboration with the Michaux Archives in Paris, it covers sixty years of Michaux’s creative activity, focusing on his most important periods and brings together some 230 pieces, documents and objects. But it’s still only a fraction of his work. Opening with a collection of anthropological objects collected on his travels it places Michaux firmly in the camp of other modernists such as Freud and Picasso who had an interest the ‘primitive’ and saw other ethnic cultures as providing immediacy and authenticity away from the constraints of bourgeois western society. 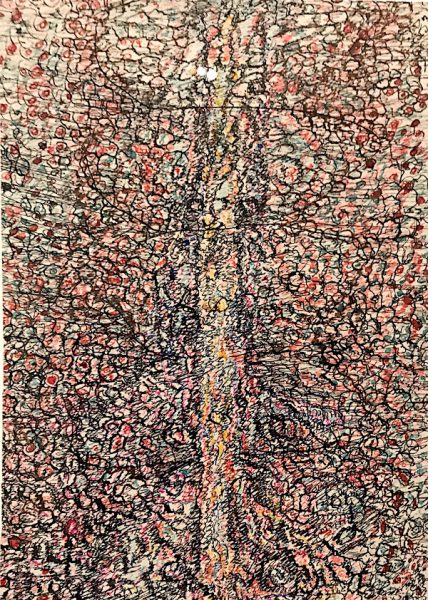 As a poet Michaux most closely resembles the surrealists but can’t really be accurately grouped with them. He often used rhyme and verged “on the musical in his haunting, desperate litanies with their repetitions and developments.” Essentially his concerns were, as André Gide said, with “the strangeness of natural things and the naturalness of strange things.” His work is imbued with a sense of alienation both from his self and from others, and his writings emphasise his fears and anxieties. Poetry was, for him, a form of self-analysis that allowed him to exorcise his demons. There’s an ever-present conflict between inner and outer. Something of an enigma, he screened much of his private life from public view. Though it is known that he felt alienated from his parents, that he read the works of mystics, along with that Lautreament and Kafka and that, as a youth, he wanted to join the priesthood but was dissuaded by his father. Instead, he pursued medical studies, which he abandoned to sail with the merchant marines, travelling to the United States, South America, and England, and later, on his own, to Asia,

It was in later years that Michaux devoted his talents more to painting. An indefatigable experimenter and traveller, he entered the world of painting after coming across the work of Paul Klee and Max Ernst in the 1920s. Ink and paper were his first tools, but he soon developed his characteristic techniques of tempera on a black background and frottage. To use his own words, he ‘painted to surprise himself’. His process was to ‘provoke’ events in his chosen materials and cause the emergence of ambiguous and unexpected faces and figures, signs and landscapes. Here, there’s a whole section of these accidental works that include strange ectoplasmic faces and dancing sprite-like figures. It was these inadvertent occurrences that arose with the use of different papers, inks and watercolours that were of interest. Chance, that serendipitous aspect loved by the Surrealists, was of supreme importance. Yet he never not set out to establish pre-conceived images but rather let the marks and stains that occurred on the paper dictate his direction. Michaux wanted to fabricate reality rather than reproduce it. 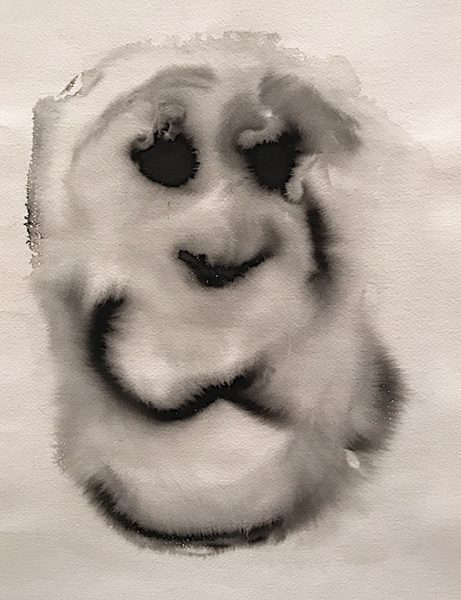 Calligraphic experimentation accounts for a large proportion of his graphic output. Fascinated by Eastern scripts, above all Chinese ideograms, he worked on the creation of invented alphabets that had no phonetic or semantic correlation. Though many of these suggest the rhythms of poetry, they are a literature of gesture and impulse, generated by the pen stroke. His signs are like moving figures in a constant state of mutation. Their totemic quality and similarity to the cave drawings of early man leave one asking if he inadvertently stumbled upon the philosophical nature of their nascent creativity. Following a continuous rhythmic principle, these graphic scripts form an investigative journey in a variety of directions. Alongside an interest in pictographic scripts, he also developed a growing passion for sound patterns and the Guggenheim provides both spaces and instruments for audience experimentation.

Michaux’s crippling shyness meant that he wasn’t much of a joiner. He didn’t belong to any artistic group or school, preferring to attribute his work to phantomism – an art of ectoplasmic ghosts and apparitions. Essentially, he was concerned with three main elements: the figure, the alphabet and the human psyche, which he used to create a cartography of linguistic symbols, a copulation of signs and images that he used to increase his understanding of neurological perception. Like Aldous Huxley, he experimented with hallucinogenic drugs, primarily mescaline, in an attempt to explore his inner world. But he was not some sort of early hippie. He was fifty-seven when he embarked on his first drug-induced voyage, which was assisted by doctors and medics close to the literary world, including a neurologist from Bilbao, Julián de Ajuariaguerra

Then, at sixty-seven, he gave up drugs on his doctor’s advice, believing he’d already experienced all that he could with them. But his work brought him to prominence as the doyen of the incipient psychedelic culture. Though he always insisted that he was a ‘sober water drinker’ with no interest in discovering artificial nirvana. Towards the end of the exhibition we see him working in oil on canvas but compared to the earlier experimentations there’s something rather tame and pedestrian about these paintings.

Michaux was very much of his time. Part of the generation of Sartre, Beckett and Giacometti who were trying, in that turbulent period, to decide what it meant to be a free-willed individual. He had a bleak view of the human condition. His poems and drawings emphasize the impossibility of making sense of life. It was against this feeling of futility that he pitted the richness of his imagination to create a series of idiosyncratic images that reflect the absurdity of existence.

Sue Hubbard is an award-winning poet, novelist and freelance critic. Her latest novel Rainsongs is published by Duckworth.