Henry Moore Helmet Heads: As an etcher, I have a long term interest in armour as one of the early applications of the process. Daniel Hopfer (1470-1536) of Augsburg, Germany decorated armour in this way and applied this corrosive picture-making method to printmaking on iron plates. I have been turning contemporary etching plates into armoured structures and so was initially attracted to this exhibition because of this interest.

I was born and educated in Manchester and have grown up with Moore’s sculptures as pinnacles of modernism of twentieth century UK visual art. Regionally he was an important figure during my upbringing due to his Yorkshire roots, so I was brought up to feel an ownership of his public sculpture. But an early, imposed familiarity also reduced my perception of his output down to his exterior work of reclining women, notable for their scale and implied softness, impressive and emotional through for their use of shape light and form. This exhibition proved to me that armour was a significant influence on him and yes, it changed the way I think about his work. 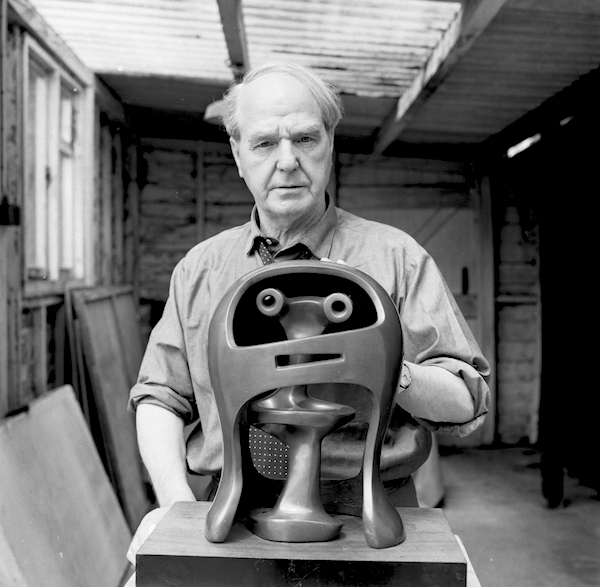 Being here in the Wallace Collection the exhibition has a thought-provoking resonance. Because it was here that Moore came as a young artist to see the armour collections and sketched them as a young man working on his early generation of output. Items from these collections, sallets and armets, a full suit (described as a hollow sculpture) are displayed alongside his cast bronzes, lithographs and carvings. This allows a context to develop without forcing the correspondence through text.

When the Wallace Collection was gifted to the British nation in 1896, Lady Wallace made a condition of the bequest that no object should ever leave the collection, even for loan exhibitions. My companion on this visit, the poet Dino Mahoney brought this point to my attention and it is a poignant fact to know that this exhibition could not happen in any other location. The Moores are infiltrators or honoured guests, however, you want to personify them. But they are in a unique dialogue for the course of this exhibition.
And so to the Moore sculptures themselves, to these helmets that are the point, the focus, the heart of this show. Many represent the interior as well as the exterior, the inside and the outside, what is protected by the armour as well as the armour itself. Like a baby in a womb, like a precious heart inside a suit of armour, like the vital organs inside a skeleton or a turtle in its carapace, a crustacean in its shell, an organic interior is carved or cast inside its defensive, nurturing container. Some are cross-sectional in a way, half-revealing, half-exposing the curves of an interior life and mechanism. Shapes that come to mind are ears, shellfish, lobster and prawn exoskeletons, the external skeletons of grasshoppers and cockroaches.

Armour has an essential place in contemporary media, in 3D spectacular action films, in superhero characters. Behind and in front of the camera science is powering new generations of exoskeletons that work in tandem with the user. Although there is always the uncanny possibility that this armour will take on a life of its own and move onwards without its owner. Staring at the full body suit of armour it is easy to imagine it animated, heartless, bent on violence, come back to life. A gothic nightmare.

But Moore’s vision is not nightmarish. It is to protect from the horrors of war. For me, and most others, born after the end of the Second World War, it is hard to imagine living through those two periods. Surely protective environments must have been authentic to those who had to cower and retreat from conflict. In the Second World War Moore drew the people of London, sheltering in the tube stations as the Blitz roared and bombs fell. There is a fragment of his work here, but I have seen more. I have seen those drawings of people, I remember them as mostly women, hiding like insects sheltering in burrows, covered in blankets, rendered in cross-hatched ink and chalk, scratched into a paper twilight. 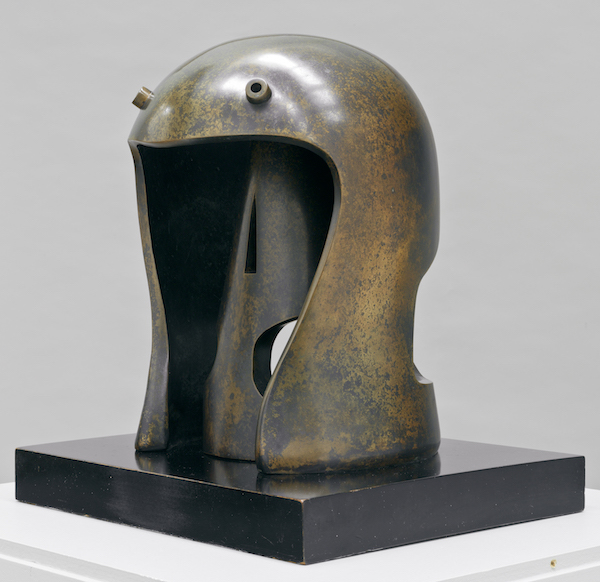 And going back further, to Moore’s formative years there are helmets, including the plain Brodie steel, with its simple, naive structure. The tin hat, the dishpan hat, the washbasin, called by the German’s the Salatschüssel or salad bowl. There it is for us to see its strangeness in this unusual context, the grandeur of Imperial nobility. The growth of steel helmets was phenomenal. The first soldiers, unbelievably, had none issued. But Brodie (from Riga, Latvia) created a design based on the medieval kettle hat with its wide brim to protect from cavalry blows. It looks basic, unformed compared to the German stahlhelm or steel helmet, developed from the medieval sallet. Moore’s elegant designs have more in common with the German shapes, certainly in form.

At the beginning of the exhibition are the figures that first inspired Moore as a child, when nine or ten. Those that are laid out for the congregation to remember their departed, knightly nobility at St Oswald’s at Methley to the south-east of Leeds. The church dates back to the fourteenth century and has links with the Wars of the Roses and the devastating Battle of Towton and its atmosphere reeks of late medieval and Tudor glory. Between the chancel and chapel, you can find the canopied alabaster tomb with two recumbent figures, Robert Waterton, depicted in his plate armour, and his wife, Cicely. Their hands are pressed together in prayers. Moore remembered the Egyptian stillness of the figures and the way their hands came away from the body. The exhibition text and imagery, printed on the wall shows the figures as if standing. But, as Moore appreciated when a young boy, the power of these effigies is in their lying down. And suddenly, I make the link with his reclining women and realise how this childhood church influenced his life’s work.

What we see in our childhood has a great impact. Which makes me think, that brought up as they are on a diet of pseudo-medieval fantasy, computer manipulated creatures and cinematic warfare full of ever more fantastic devices, children would understand and love these objects as they are displayed here. And I never thought to recommend a Henry Moore sculpture exhibition as edutainment for all the family