The word carnival derives from Latin expressions meaning either to remove meat or say farewell to meat. These indicate the Christian roots of carnival which are to be found in the period leading up the fasts of Lent. This period is a time of pre-Lenten indulgence and excess, of using all those things that will be laid aside for a period during Lent.

It is from these ideas that the key activities of carnival derive. These can include: parades, street parties, elaborate costumes and masks (allowing the setting aside of everyday individuality and experiencing a heightened sense of social unity), drinking, overeating, other forms of indulgence, food fights, social satire, mockery of authority, grotesque costumes with exaggerated body features, abusive language and degrading acts, depictions of disease and death, and a general reversal of everyday rules and norms.

The work evokes many kinds of procession to spark ideas of pilgrimage, migration, trade

Carnival, as experienced by Hew Locke in Guyana, dates back to the start of colonialism when settlers banned their slaves from taking part but, in defiance of the ban, slaves practiced carnival in clandestine ways, viewing their defiance as a way to: regain some freedom; commemorate their heritage including fertility rituals; and deride the settlers. Today, with its Paré-masqué balls and street parades, the Touloulou is considered the longest carnival in the world.

Many of these aspects of carnival are in play currently at Tate Britain in Locke’s commission for the Duveen Galleries in which almost 150 life-sized figures travel from one end of the galleries to the other. Melissa Chemam has quoted Locke as saying, “All came from my imagination, and my main inspirations were from my own experiences, in Guyana, in processions.” These were mostly joyful but could “also be intense or scary, or open-ended events.” It was important to Locke “to respond to dark times with joy, even to transform the dark into joy.” 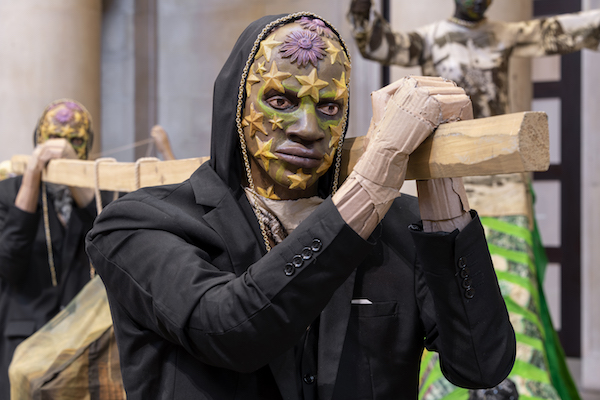 The work evokes many kinds of procession to spark ideas of pilgrimage, migration, trade, carnival, protest, social celebrations or our own individual journey through life. Many of the participants in The Procession are an assemblage or collage of symbolic objects and imagery, such as militaria, Caribbean carnival characters, momento mori, floods, or obsolete share certificates. The specific carnival references include Caribbean carnival characters from across the region such as Mother Sally with her voluminous dress, Midnight Robber wearing a huge, brimmed hat, Pitchy Patchy dressed in a suit made of colourful but tattered pieces of cloth, and Sailor Mas, inspired by British, French and American naval staff.

As with his earlier King Creole commission at Tate Britain, Locke evokes West Indian Carnival tradition because of the way in which it has “historically made comment on current affairs, local and international politics.” Costumes and flags bear images of decaying Guyanese architecture, evidence of rising sea levels, cargo and sail boats, tropical prints, slave ships, reworked and painted over original share certificates for defunct companies, late nineteenth-century photographs of sugarcane cutters and workers, or statues of colonial figures redressed. As a result, visitors to the installation walking alongside Locke‘s travellers, explore many layers of meaning, culture and history relating to globalisation, colonialism, conflict, ecology and cultural identity.

Locke has commented of earlier works that: “What seems difficult for people to realise is that the work is not simply, or mainly a political statement or an illustration of post-colonial ideas. It is about what I am interested in aesthetically and historically. It is not merely educational or designed to get over a political point. Art is emotional, intuitive and mysterious. I’m trying to get at something elusive, possibly unobtainable.” The same is true of The Procession.

Ultimately, though, Locke’s characters process and dress with the same defiance inherent in the original medieval carnivals and in the original Touloulou. They walk and talk, parade and dance, in the face of colonialism, slavery, economic exploitation, rising sea levels and more demonstrating resilience of the face of oppression, torture and discrimination. They will survive and prevail despite the challenges they face and that is ultimately what the installation reveals to its visitors.

In one tableau, a flag has a reproduced image of a statue of Queen Victoria that Locke saw dumped at the back of the Botanical Gardens in Georgetown following the founding of Guyana’s socialist republic, before later being reinstalled only to then be vandalised by anti-colonialism protesters. This image links to Foreign Exchange – a reimagining of Birmingham’s city-centre sculpture of Queen Victoria – by Locke which is a project commissioned by the Ikon Gallery for the Birmingham 2022 Festival (the cultural programme of the Commonwealth Games).

Foreign Exchange will be Locke’s first temporary public sculpture, and a natural progression of many years of research and exploration into the symbolic power of public monuments. His interest in the power of statues originates from his childhood in Guyana, where he passed the sculpture of Queen Victoria, that was later dumped, every day on the way to school. Foreign Exchange brings a diverse social and historic focus to a Birmingham heritage asset, enhancing its role as a place of discussion and celebration for the city and its visitors. Remaining on view throughout the summer months, and during the Games, at the end of the project the original sculpture will be revealed again with the hope of encouraging people to admire its artistry more closely than they may have done before.

While education and politics are not his primary aims, with The Procession and Foreign Exchange, Locke is successfully initiating conversations.