Hilma af Klint’s abstract paintings first dazzled me when I encountered her work in the 2013 Venice Biennale. The Encyclopaedic Palace, curated by Massimiliano Gioni, included her luminous and unknown (to me) art, along with other visionary artists like Carl Jung, Aleister Crowley, Rudolph Steiner, and another again unfamiliar Swiss woman artist, Emma Kunz.

“The pictures were painted directly through me, without any preliminary drawings, and with great force” – Hilma af Klint 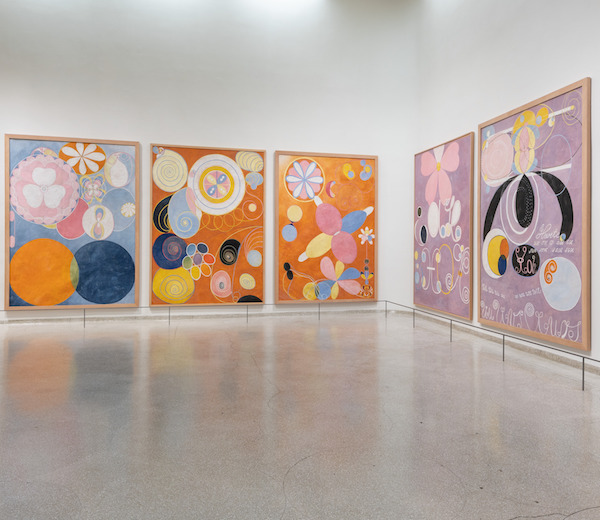 Following the intellectual pursuits of her time, Hilma af Klint became involved in seances in 1886 and later pursued Theosophy and Rosicrucianism, merging spiritual interests with revolutionary scientific discoveries. Her experiments with automatic writing and drawing were well before the Surrealists began their creative explorations. In one of her all-female seance sessions, Klint was directed to create a cycle of paintings. For the next eleven years, she worked on the monumental series, “The Paintings for the Temple.” After her respectable twenty year career as a conventional Stockholm artist, the forty-four-year-old Klimt painted her first abstraction in 1906. An early series “The Ten Largest” focuses on humanity’s life cycle, and remain amazingly vital. Before Mondrian, Kandinsky and Malevich began their own abstract works, Hilma invented her own non-representational visual vocabulary. Acknowledgement of af Klimt’s accomplishments will result in a re-writing of modern art history.

And how contemporary these works appear, with their utterly modern palette, text incorporation (years before Magritte), loopy exuberant lines and shapes (reminiscent of Terry Winters or Elizabeth Murray’s biomorphic imagery) and stark graphics akin to Russian futurism. Another component of the Temple paintings are “Altarpieces’, focusing on dualities and symmetry and featuring a rainbow-hued stairway.

Af Klint’s earliest abstractions were channelled work; she boldly experimented with form, theme and seriality. After Rudolf Steiner visited her studio in 1910, he advised Hilma to put the Temple paintings away for fifty years. For the next four years, she stopped painting. She decided not to show her work until twenty years after her death. Finally, her work was first exhibited in 1986.

Final “Untitled” watercolours from 1931 to 1941 continued Hilma af Klint explorations into the transcendental power of natural forms. Luminous splashes appear in rosy cloud-like formations, and a heart might be a butterfly as it soars above a dark hatched ovoid.

In 1930, Hilma af Klint specified that the Temple work be housed in a “nearly circular” temple connected by a serial staircase. At the same time, in New York, Hilla Rebay, artist and adviser to Solomon Guggenheim envisioned his modernist collection exhibited in “a temple of non-objectivity and devotion.” How prescient both women were. Rebay, the first Director of the Museum, chose Frank Lloyd Wright to design the Guggenheim, initially based upon Egyptian pyramids and spirals of Assyria and Babylonia. Hilma af Klimt’s spiritual path enabled her to envision the Guggenheim’s magnificent rotunda, now alive with her exquisitely original art.