Until the Modern epoch, and indeed right up to the present day, Hokusai was by far the most influential non-European artist to impact European art. Contemporary art stars from Japan, such as Takashi Murakama, Yayoi Kusama, Yasumasa Morimura and Mariko Mori, have been much exhibited in the West, but their work has had nothing like the same effect – this at a period when communication between cultures was infinitely easier and more fluent.

As the new exhibition of Hokusai’s work now at the British Museum demonstrates, his work, in addition to being directly influential on the history of Western painting, through its impact on the Impressionists, continues to resonate in the society we now have in all sorts of perhaps unexpected ways. It’s not simply that his adroitly cropped and angled compositions, often produced in series – views of Mount Fuji, views of bridges of different kinds, views of waterfalls – offered ways of looking at the natural world that seemed inventively new to the Europeans who first encountered them. It’s also that so much of what he did seems to offer a critique of the art and art world that we have now.

Hokusai existed and made his career in a society radically different from our own. He was born in 1760 and died in 1849, just missing out on his ambition to live to be a hundred – by which time, he felt, he might really have learned to paint. During the whole of this period Japan, under the Tokugawa shogunate, remained secluded from the rest of the world. The first major breach in the barrier was not made until three years after Hokusai’s death, by an American flotilla under Matthew Perry, sent to force the opening of Japanese ports to American trade. Before this, the Japanese had traded only with the Dutch, penned safely in an offshore enclave, and with the Chinese.

The show, which covers only the final and most radical decades of Hokusai’s life, demonstrates that he nevertheless had some contact with European art, no doubt through prints imported by the Dutch, and that he absorbed ideas from these that were foreign to the Japanese tradition, about the representation of space and the use of quasi-European perspective, and put them to inventive use. 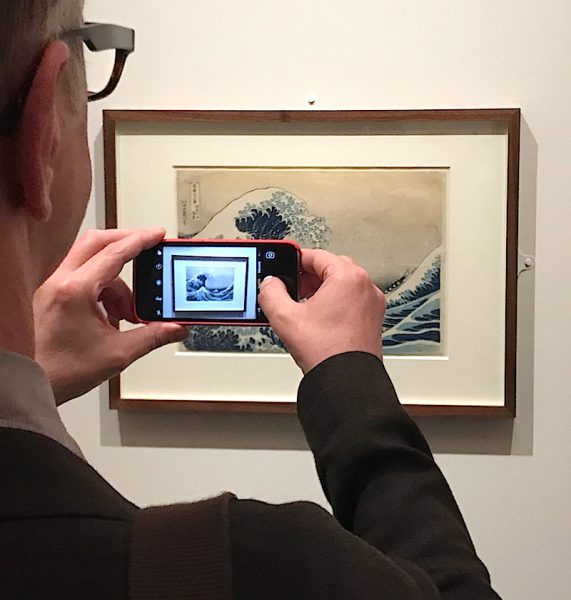 The most famous of all his compositions, Under the Wave off Kanegawa (known in the West simply as The Great Wave), is an example of this, with the sacred mountain pushed far into the background in the centre of the composition, with the wave of the title towering above it, and making a kind of tunnel with the landscape feature enclosed in it. It’s like looking at Fuji from far off, using a powerful telescope. This is not the conventional way of representing distance that one finds in traditional Chinese and Japanese landscape painting, where the landscape features are simply stacked up, often separated from one another by bands of clouds.

The other thing that bears thinking about when looking at Hokusai’s art, is the fact that it was successfully populist: an art for everyone. Probably much more so than the kind of populist art we have now, offered to us in grandee museums. ‘twelve quid to get into the show, guv. A bit less if you can prove you’re a pensioner.’ It’s estimated that The Great Wave was issued in a run of around 8000 copies, and was sold for about the price of a bowl of rice.

And it’s a piece of virtuoso craft, as well as being undoubtedly a great work of art. No more than our own Damien Hirst was Hokusai reluctant to work with skilled collaborators, in this case, the cutters of the incredibly refined woodblocks from which the print was produced, and the craftsmen who actually printed it.

Hokusai lived in a society almost unimaginably different from our own. He was a devout Buddhist, He never seems to have had much money, nor does he seem to have cared about that. He frequently changed addresses, moving restlessly within the capital city of Edo, now Tokyo. He made modest trips outside, to look at the landscape, but on some occasions seems happy to have imagined it, from descriptions provided by others. Sometimes he threw drawings – they represent lions – out of the window for good luck.

There’s a little self-portrait drawing in the show which shows Hokusai as a scrawny old man, wrapped in a quilt. A contemporary witness tells us that the quilt was most likely full of lice.