Everyone has a “somewhere else” in their lives Howard Hodgkin said in 1992. “My somewhere else is India”. Howard Hodgkin was 32 when he first visited that vast country. At Eton, he’d been shown a 17th-century Mughal painting by a teacher and in his 20s had become, despite modest means, something of a collector of Indian art. A meeting with Robert Skelton, then the Deputy Keeper of Indian Art at the V&A, led to his first visit in 1964. India was the place he continued to go back to until his recent death, a place that fed his visual imagination and become an increasingly important part of his painterly vocabulary.

Mr. Over is dead

He died fighting and true

And on his tombstone they wrote

One of this country’s great colourists Hodgkin has not always been flavour of the month, being too decorative, too gorgeous and too painterly for many postmodern tastes. His are greedy paintings. They’re greedy for life, for colour, for sound, sense, touch, and smell. For the tactile experience of being alive. There’s a profound eroticism in the movement of his paint and the sensuality of his colour. At The Hepworth Wakefield, where the work is displayed in chronological order – the first gallery being dedicated to some of his collection of Indian art so that we can see the development of his visual thinking –  it is shown to full effect against the white walls of the Chipperfield building. The sandy browns and oranges set against the sage green, the undulating chestnut haze that seems to shimmer in the heat, bleeds into the saffron yellow horizontal of Bombay Sunset (1972-73) so, as viewers, we become totally immersed in the experience.  In 1987, Hodgkin said “I think the striped ocean and the dotted sky… is simply part of the language that I was trying to evolve for myself, using very simplistic means…A sunset in Bombay really does – curiously enough – look like that… It’s the only thing I can think of in any of my pictures which has a specific likeness to an Indian miniature” 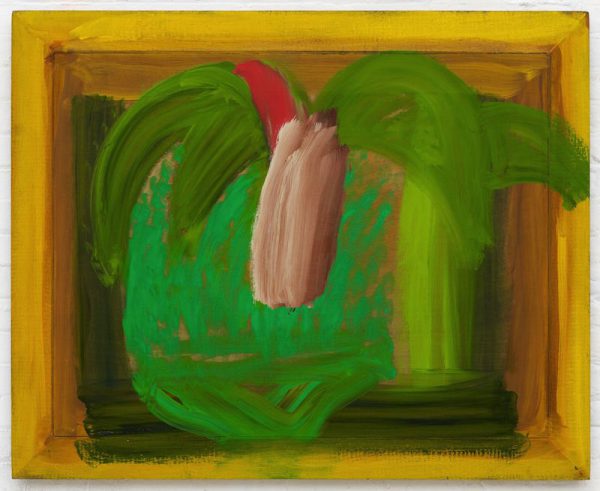 In another painting from the same decade, In a Hotel Garden (1974) we can virtually feel the fierce midday sun pulsing beyond the suggested window frame, the patches of cool air circulating beneath the abstracted blue and white stripped awning, the filtered shadows penetrating the arched leaves of the palm tree. But Hodgkin isn’t a realistic painter. He doesn’t describe. He immerses himself in a particular time and place to recapture it later in the studio, like Wordsworth recollecting his emotions in tranquillity. In 1967, after several days spent in Delhi with the British Council representative and his wife, he painted’ Mrs. Acton In Delhi’ (1967-71), possibly his most figurative painting. The odalisque-style figure of Mrs Acton, made up of spheres and curves, reclines languidly on the left hand side of picture space. It was during this period that Hodgkin decided to move from painting on canvas to wood, saying, “I want to be able to attack again and again and again, and the trouble with canvas is that if you attack it more than once or twice, there’s nothing left.”

By the 1980s he had travelled to India more than a dozen times. His friend the travel writer Bruce Chatwin noted that “India became an emotional lifeline.  Each winter he travelled all over the subcontinent, sopping up impressions – of empty hotel rooms, the view from a railways carriage, the colour of cowdust in the evening, or the sight of an orange sari against a concrete balustrade…” Slowly the paintings of this decade became much less what he described as ‘voyeuristic’ paintings’ and more reflective. Intangible feelings, emotions, and sensations are conjured to become metaphors for his state of being. Equivalences of emotional moods. In the Studio of Jamini Roy (1976-79) the ‘pointillism’ of the sand-coloured dots set against the black ground achieves an apparent harmony that once arrived at seems as if it could never have been any other way. The brushstrokes become increasingly gestural. This immediacy was facilitated by the adaptation of Liquin, a quick drying medium which allows multiple layers to be applied in quick succession and permitted him to create glazes, adding a sense of transparency. Sweeps of colour evoke times of day and atmospheric conditions.  Some of the fiery intensity of Turner pulsates in the small painting Nightfall 1995-96. Here the deep furnace-red that spreads right over the picture frame appears to be slowly obliterated by the descending blackness of night. Only a thin sliver of green remains along the inner edge of the picture frame. While in Afternoon, 1998-99 there’s the sense of entering through a proscenium arch into the deep perspective of gathering heat.

As Hodgkin grew older and painting became more physically demanding much of the thinking took place primarily in his mind. Even so, he managed to produce some emotionally powerful paintings where the mood is suggested in a just a couple of judicious strokes. What we are presented with is the artist’s mind turning over and processing thoughts, feelings, and moods. These works are aimed beyond what we see in the everyday world. They transform experience into something that transcends knowing and feeling to some intangible awareness that is the catalyst behind so much important art. The monochrome immediacy and the lack of decoration of Night Thoughts (2014-15) suggests the bleak existential despair of a sleepless night, and the process of aging.  While Over to You (2015-17) recalls Stevie Smith’s ironic poem Mr. Over: (See Quote Above)

In an essay I wrote about Hodgkin some years ago, I mentioned Edward Said’s essays, On Late Style and considered how they “examined the idea that late artistic works are not always serene and transcendent but, on the contrary, often unresolved and contradictory. Not so much a pipe and slippers summing up, but a ‘raging against the dying of the light’”. Looking at these final paintings in Wakefield this seems even truer, now, after Hodgkin’s recent death. There’s a savage ‘raging’, a refusal to put down the brush, a determination to go on thinking and recording the human condition, his human condition, to the very end through his chosen medium, paint.