The current show of late paintings by Howard Hodgkin at Gagosian Grosvenor Hill is, for me, a melancholy occasion.

The exhibition, taken as a whole doesn’t convince me that we have said farewell to a major British master – ELS

I knew Howard personally, and liked him. We had a lot in common. We were both, for example obsessed collectors of things that had nothing to do with the world of contemporary art. Hodgkin was an expert on Indian miniature painting and built up a fine collection. Strong traces of this remained visible in his work till a late stage in his career. These miniatures were to him a source of inspiration comparable to the impact that Hokusai and other Japanese ukiyo-e printmakers had on the Impressionists and Post-Impressionists. There was too the direct influence of the French turn-of-the-20th-century Nabis group, that of Vuillard in particular.

Like Vuillard, Hodgkin at his beginnings painted images of a cosily intimist bourgeois world, not without a tinge of satire. I remember one painting of this sort, in particular, I don’t recall its official title, but it was known to a circle of friends that embraced both the artist and his subject as ‘Bruce Chatwin Turning Away from His Guests’. It showed the then newly famous author disdainfully doing exactly that, posed against a Japanese screen. 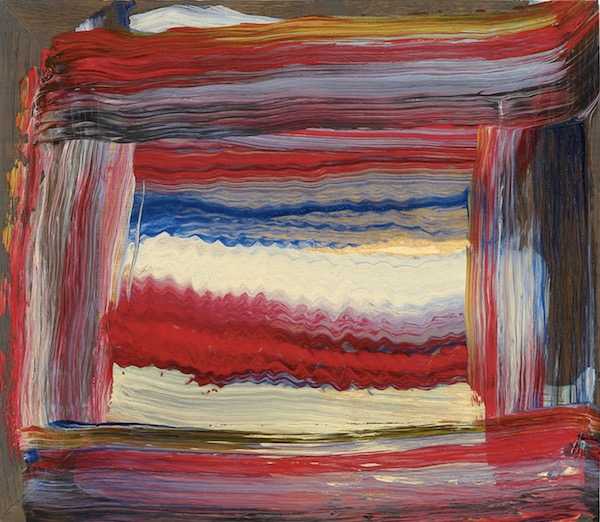 The late paintings have more or less abandoned any ambition to be figurative, though twee titles – Cocktails for Two, Over to You, Don’t Tell a Soul – sometimes hint that figuration may be buried in there somewhere. Other titles confess to a very British landscape impulse – Bombay Night, Bombay Afternoon, A Green Thought in A Green Shade. The ghost of JMW Turner hovers just out of sight.

All of this seems to me pleasant enough, but alas the exhibition, taken as a whole doesn’t convince me that we have said farewell to a major British master. While it is on record that many of these paintings took not just months but years until the artist regarded them as complete, there is little evidence that the long process of meditation and cogitation delivered major results. Over to You (2015-2017) is, like most of the work on view in the show, quite small – 9 ¼ x 12 3/8 inches – at its ‘subject’, if one call it that, is a few broad swishes of red paint on an ever-so-slightly uneven green ground, with further traces of red peeking out. I’m afraid my reaction as I looked at this was to murmur apologetically to the hovering ghost of the artist: ‘Sorry, baby, I missed the catch.’ 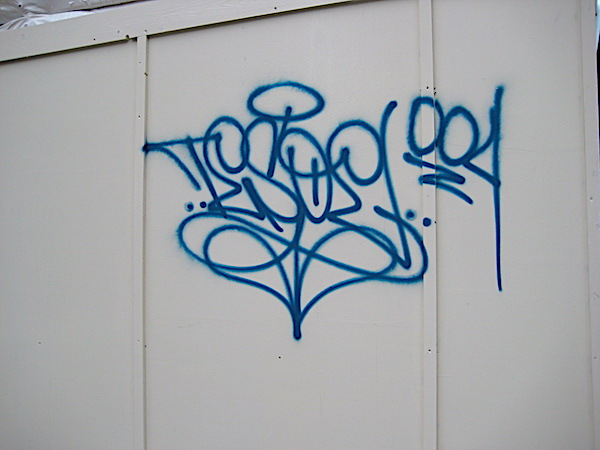 The picture I liked best was quite a big one that I think has been previously exhibited – Portrait of the Artist Listening to Music (2011-2016). In this I was definitely aware of a human presence, however coded the representation.

Going out of the gallery, I was immediately confronted by a rather brilliant little bit of anonymous graffiti on a neighbouring hoarding. Me bad, but I liked it better than much of what I had just seen inside.