As the title of this fascinating new show at Charlie Smith London suggests, Hugh Mendes is here offering multiple self-portraits, in the form of portraits of other people. In this case, images of famous artists of the past, borrowed from their own self-portraits and presented as the sort of i.d. likenesses that accompany obituaries of the famous in today’s newspapers.

What is interesting here is something unexpected

Only one of the likenesses is likely to be completely unfamiliar – that of Vermeer, borrowed from an early genre scene by the artist. It shows a group in a brothel; Vermeer is the figure on the right, holding a glass of beer and wearing a big floppy hat that shades his face. He does not look at the young prostitute who occupies the centre of the scene, but quizzically out at us, his fellow spectators. It is largely the hat that makes him recognisable. The figure of an artist with his back to us, working at an easel, who has the significant role in the much more famous Painter’s Studio, now in the Kunsthistorisches Museum in Vienna, wears identical headgear.

The identities of the other subjects more or less jump out at one – great parade of the ‘usual suspects’: Velazquez, Schiele, El Greco, Goya, Rembrandt, Van Gogh, Picasso. One woman: Frida Kahlo, who was certainly obsessive about rendering her own likeness.

What is interesting here is something unexpected. Not the self-identification one might expect, but its opposite.

That is, these are no longer simple acts of self-examination, obediently copied, but tributes to the enduring celebrity that these often long-departed personalities have achieved, and to the way in which they now continue to resonate in the popular imagination after their demise. What they say is: ‘Yes, this person is still very much alive to us.’

But there is also a sense of distance, not just because they lived in earlier times but also because of their enduring celebrity.

One can, therefore, suggest a further dimension. Basically, what is offered here is a series of cultural icons. It is not going too far to say that they are the equivalents of the sacred images one might find in a church.

We live in a time when this hunger for and sense of the sacred has been displaced from the purely religious settings they once seemed to occupy. Rather than celebrating rituals in church, we now very often subscribe to a more general cult of ‘the creative’.

The growth of interest in self-portraiture, from the time of the Renaissance onwards, can be regarded as being part of this. Essentially, self-portraits offer not simply a likeness that external observers will recognise, but an invitation to penetrate the innermost recesses of creativity. Another paradox here: in doing so, the observer is often made aware of the huge gap that exists between the maker of the self-portrait and himself (or, as the case may be, herself). The self-portrait thus alienates at the same time as it penetrates. We can never be Rembrandt. We can never be Van Gogh. Nor would we, in all honesty, wish to be either.

The format that Hugh Mendes has chosen for this series of portraits is all the more interesting because of the subtle way it captures this sense of alienation. 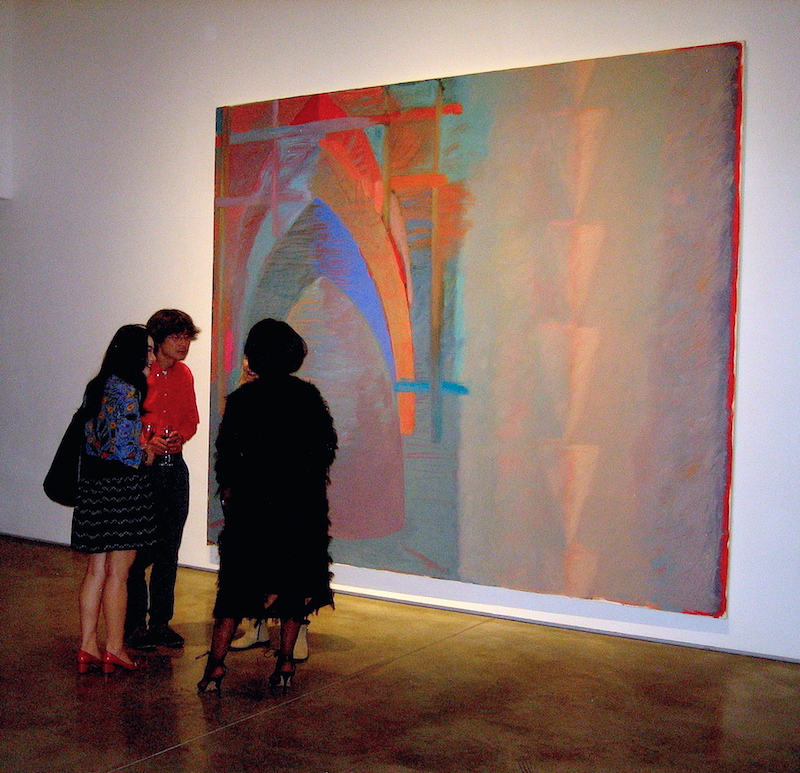 This big show of work by John Loker, now at Flowers East, is accompanied by a handsome book, published by Elephant in association with his gallery, and entitled Horizons, Zones and Outer Spaces. The exhibition and the book celebrate the artist’s 80th birthday, and an association with Flowers that has endured for nearly half a century. It is one of a whole series of upcoming London shows devoted to senior British artists. Opening soon at Bernard Jacobsen is one devoted to the work of William Tillyer, who was born in exactly the same year.

These tributes are well deserved, but they do inevitably draw attention to the increasing absence of young artists from London’s major galleries, both official ones and commercial entities. An art world so thoroughly dominated by ‘golden oldies’ looks – by paradox – essentially fragile and insecure. Even its exciting newcomers, such as the recent comet that is Rose Wylie, belong to the same mature -ahem! – generation.

Loker’s show is full of big, confident abstract paintings, sometimes with glancingly figurative references. There is one large canvas, for example, that, which its pattern of arched forms, might remind you of the inside of a church. It is indeed entitled Blue Cathedral (1988).

The press release for the show, available on the Web, speaks of: ‘Whirlpools, traps. helter-skelters and cauldrons,’ – metaphors to do evoke the dynamic quality of many of Loker’s compositions. One painting, Group Therapy (1988-89) is based on forms suggested by the nose-cone of a missile.

The artist says of these cones: ‘the way in which they were spinning looked to me like people, all bouncing off each other… trying to communicate but failing miserably. I was thinking about danger, playing with things you shouldn’t, the balance of everything being so fragile.’

This underlying sense of anxiety is, however, conveyed in compositions that are predominantly cheerful in colour, never overbearingly aggressive. And the exhibitions as a whole has genuine coherence. You feel you are in the presence of an artist who has created his own personal language, and who knows how to use it.

One fascinating historical factor here is where Loker comes from. He originates from exactly the same milieu – the city of Braford – as David Hockney, who is also exactly the same age. Spoiler alert here – I am referred to in the book as having christened the young Loker, the young Hockney and several of their then associates ‘the Bradford mafia’: shorthand for just the kind of group of trouble-making young artists whose absence from the scene I am lamenting now.

In his very earliest period, in the late 1950s, Loker was a figurative painter of landscapes. These don’t have much resemblance to the landscapes that Hockney has been making recently. However, if you look at Loker’s much more recent compositions with the eye of faith, the twisting dynamic forms might sometimes seem to have a kind of distant cousinship to the landscape paintings that Hockney is making now.

Perhaps the instinct for making trouble does live on.