The 20th century saw God lose his central role within the scheme of human belief and philosophy. Nietzsche’s assertion that God was dead was followed by two of the bloodiest wars in human history, which further cemented feelings of alienation, scepticism and doubt. Artists, writers and thinkers found themselves in a world that lacked transcendental meaning, where the divine no longer offered escape or respite. In his writings, the French philosopher Sartre’s nihilistic existentialism chimed with the experiences of war. The belief that ‘existence precedes essence’ meant individuals were now responsible for their all too human choices, whims and actions. What came to interest artists was the authenticity of individual experience, the solitude and angst experienced by those who understood that God had finally gone up in smoke in the chimneys of Auschwitz. “To me,” wrote W.H. Auden, “Art’s subject is the human clay”.

After the war, echoing, Beckett’s doom-laden remark that: “there is nothing to express…no power to express…together with the obligation to express,” Giacometti – who appears fleetingly in this show All Too Human at Tate Britain – was so eaten by doubt that he was only able to make the tinniest of sculptural figures. The title of the show is based on Friedrich Nietzsche’s book of aphorisms of 1878 and illustrates how an unsentimental approach to painting, free of romanticism or mythology, took hold. Human relationships, raw desires, drives and fears are the preferred subject matter of these artists. They painted their friends, lovers and family with real and urgent intimacy. 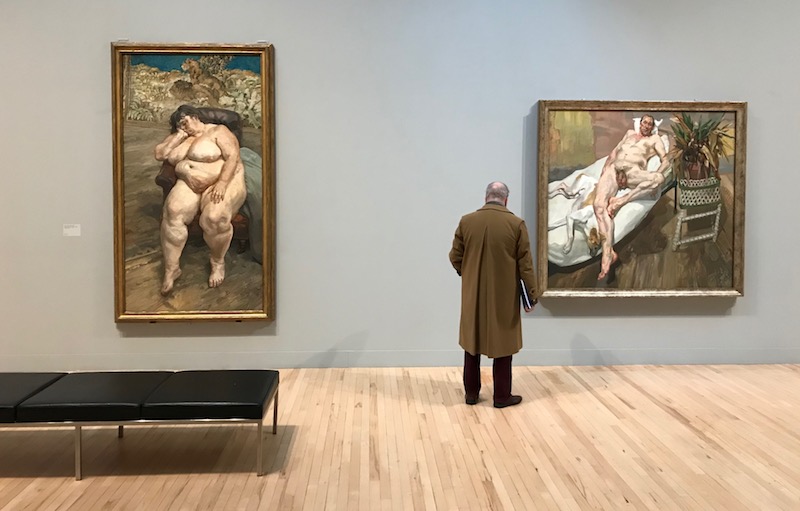 A number, such as Walter Sickert, David Bomberg and Stanley Spencer, reach back into the 19th century, with further sections ranging through the likes of Lucien Freud and Michael Andrews, towards a gathering of younger women who undermine what was, until recently, an essentially male view of the world. Sickert’s bleak and sensuous figures, which borrow from Degas, set the tone. These are naked women rather than academic nudes, where we, the viewer, are invited to become complicit voyeurs. Spectacle and desire are also expressed in Sickert’s dark music-halls with their working-class audiences. Elsewhere Stanley Spencer’s second wife Patricia Preece confronts the viewer with her piercing gaze in an abrasive image that’s free of all false sentiment.

Flesh is important. Soutine’s excitement with raw meat is taken up by Bacon and translated in Bomberg’s and Auerbach’s thick gloopy impasto and gestural brushwork, where the paint comes to form a sort of bodily skin. As Freud said: “I want the paint to work as flesh does.” The distillation of undiluted experience, what it feels like to inhabit rather than observe the world, is what matters. In contrast to Freud’s paintings from life, the exhibition explores Francis Bacon’s relationship with the photographer John Deakin, whose portraits of friends and lovers often provided him with the catalyst for his paintings. 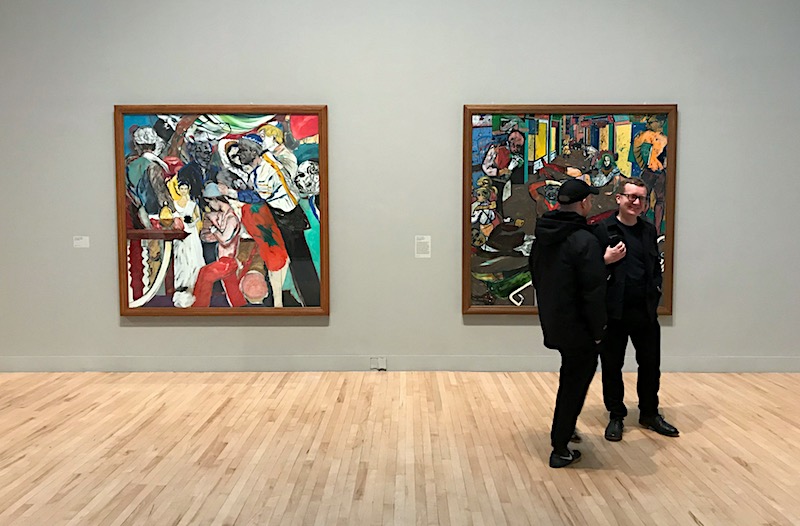 The show will please the naysayers who have been claiming over the last couple of decades that painting is dead. For most of these artists, the sensual pleasure taken in their medium is clear to see. Central to the narrative is the role of the School of London that included Francis Bacon, Lucien Freud, Leon Kossoff, Michael Andrews, Frank Auerbach and R.B. Kitaj. A group loosely linked by friendship and a mutual sensibility to the modern world. They met regularly at Soho drinking venues such as the Colony Room, run by the notorious Muriel Belcher, and regularly painted each other. Both Kitaj and Michael Andrews, in their very different ways, explore an interest in group scenes and storytelling.

London is also important. There’s a room filled with crowded swimming pools and vertiginous city churches by Kossoff. These are juxtaposed with the psychologically complex and angst-ridden portraits of Frank Auerbach, which often feel like a difficult psychoanalytic session expressed through the medium of paint. While the focus of the show revolves around the London School, diversity is flagged by the inclusion of the mystical work of Indian painter FN Souza.

But it is Freud who dominates with his superbly neurotic, hyperreal paintings, through to those where the paint becomes looser and more visceral. There’s a stunning small head of Leigh Bowery which, with his closed eyes, dimples and fleshy rose-bud mouth, is full of surprising tenderness. Freud’s ability to mirror the soul of his sitters is also there in the poignant portraits of his mother and the astute depiction of Frank Auerbach, his friend and artistic rival.

Deference is paid to William Coldstream and the Slade School of Art. For Coldstream painting was above all a process of perception. To this end, he attempted to fix observed reality in a series of measurements. This practice was also adopted by a generation of Slade painters, particularly Euan Uglow though, in contrast to the sturm und drang of the Europeans such as Freud, Auerbach and Kossoff, there seems something tight, English and rather academic about these. 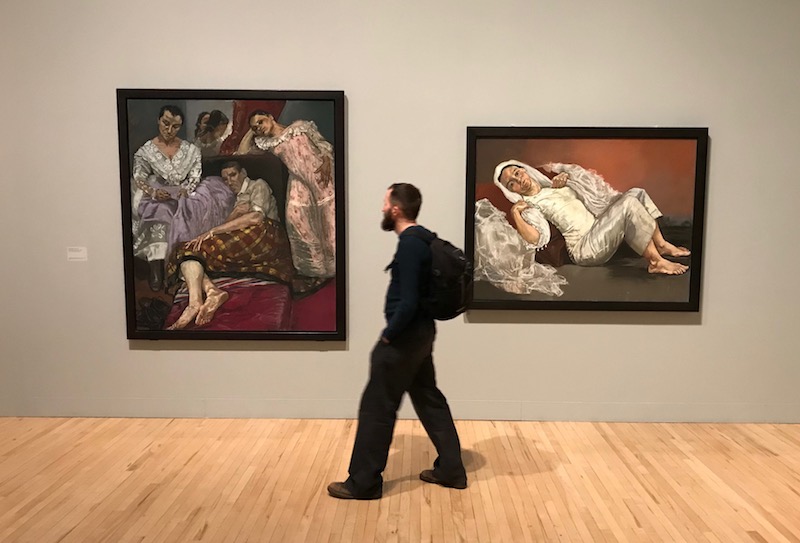 A generous display of Paula Regos turns the previously male-dominated view of the world on its head. Not only does she explore human relationships with her own cast of personal characters but she’s unafraid of using stories and commenting on social issues. We see the world not only through her vivid imagination but from a feminist perspective as she fearlessly takes on issues of sexual inequality, jealousy and emotional abuse. 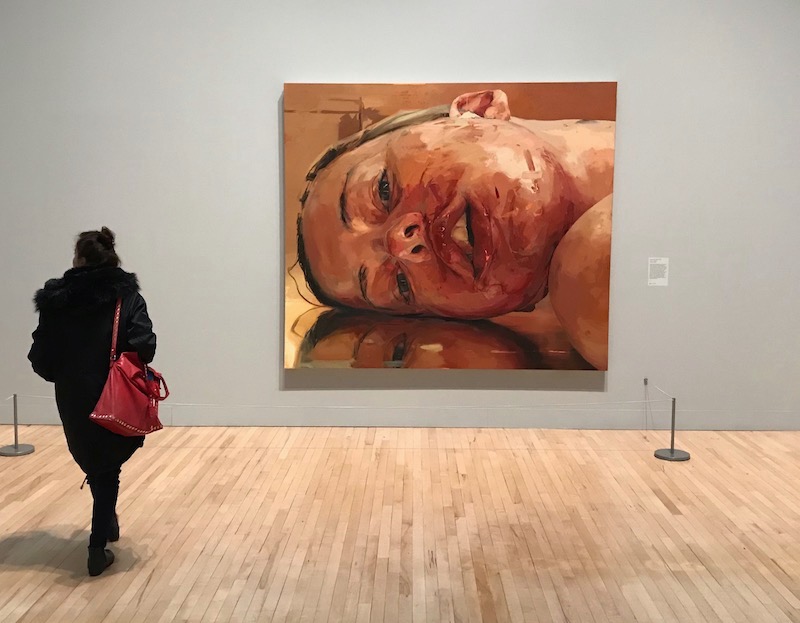 The exhibition concludes – optimistically I would suggest for the future of painting – with a room full of powerful works by younger female painters. Jenny Saville’s visceral self-portrait, with its parted wet lips and dreamy gaze, has something post-coital and confessional about it. In contrast, Celia Paul paints herself as both model and painter, in poses that are introverted, dreamy and intimate, with the edgy intensity of Gwen John. Lynette Yiadom-Boakye is represented by two of her distinctive fictional portraits, while Cecily Brown pays homage in her complex painterly canvases that merge abstraction and figuration, to her many art historical influences. This show creates numerous threads between artists across the generations. Painting, looking and trying to make sense of the human condition will, this show suggests, be with us for a long time yet.

All Too Human: Bacon, Freud and a Century of Painting Life – Tate Britain Until 27 August Adult £18.80

Sue Hubbard is a freelance art critic, award-winning poet and novelist. Her new novel Rainsongs from Duckworth can be bought Here:

The language of the poet is different to that of the critic. As a poet i inhabit a painting rather than standing outside it. Put on the skin of the subject using words as a painter might use texture and colour. The raw authenticity of  Bacon and Freud attracts me as a poet, the sense of the subject’s  interior life. The poems are not illustrations but have their own sensual existence that grows out of  the paintings.

STUDY OF A DOG

Beyond the date palm

and ribbon of hot san,

the electric zip of blue sea

and strip of burning highway

where cars black as ants

flow liquid in the heat,

colour from the concrete boulevard,

and in a patch of back-street dirt

in its own shadow,

chasing its own tail.

Flea-ridden, the stink of gutter

clotted in its fetid fur,

it is, behind its black snout

behind its helmet of bone

and knowledge of the human,

returning to what is

to what is dangerous.

I know this rooms as well as any prisoner

of my skin infirmary green as pinioned

by his gaze I lie, exposed across this

a mortician’s slab. Though I give

everything I have, hold nothing back,

he barely sees me. A woman, a dog,

for him they the same. At night

he breathes in my civet sweetness, by day

I’m an experiment in bald flesh;

terrain for his palette knife, the sable

brushes lying on the paint-clotted stool.

Crow-like he picks me clean.

My fan of fallen hair offers no protection

as he peels back my paper skin.

Outside his high windows

the winter morning is dark with rain;

swish through the glistening

mica streets as if there was

somewhere they needed to go.

From: The Forgetting and Remembering of Air pub Salt – Sue Hubbard © Reprinted By permission 2018 Artlyst