The Iconoclasts show just opened at the Saatchi Gallery suffers from a number of difficulties generic to enterprises of this kind. The show is sub-titled ‘Art Out of the Mainstream’, but does anyone now know where this mainstream is located? The art world is full of artists running around, claiming to be contrarian, but what are they trying to contradict? There is no monolith of received opinion, against which the little doggies can raise an impudent leg.

The artists included span several generations. The oldest was born in 1964, and the youngest not till 1988. The majority live and work in Britain, but there also exhibitors from the USA, France and Japan. They make use of a wide range of techniques. Most make use of paint on canvas, but there is also a certain amount of photographic work. Some artists make use of stitchery. One contributor makes use of knitting to create figurative images. A large sculpture announces itself as being made of ‘clay and steel cable’. Another is made of ‘crow’s feather and mixed media’.

The works on view do have several characteristics in common, that are nothing to do with either style or technique. With two exceptions, the artists selected tend to make works that are very large. And with the exception of the two sculptors just mentioned, they also tend to make work that is either directly figurative or which, at least, contains figurative elements. The big figurative paintings look very much at home in the Saatchi Gallery’s generously sized exhibition spaces. You have room to stand back and take a good look, no need to press your nose to the painted surface. These works are what people automatically call ‘museum sized’. But where are the museums that will accommodate them once the exhibition is over? The artists seem to be addressing a market that doesn’t exist.

The exhibition gave me, above all, a nagging sense of the degree to which the mechanisms of modern patronage are out of step with the overweening expectations of contemporary artists. As the Saviour long ago said: ‘Many are called, but few are chosen,’ (Matthew 22:14).

Despite this, I had to admire the considerable bounce and energy of the works displayed. The only painter whose work I knew previously is Danny Fox. Like many of today’s most interesting artists (and like Francis Bacon before him) he is self-taught, and his work has tremendous bounce and energy, The same qualities are to be found in the work of the Japanese artist Makiko Kudo who, the catalogue tells one, draws of the tradition of ‘Japanese stage curtains’. You find the same swagger in the work of the black American artist Aaron Fowler, who is the youngest artist included in the show. In a catalogue note he says; “I use the forms I make to speak things into existence.’ Well yes, he does – they succeeded in speaking to me. 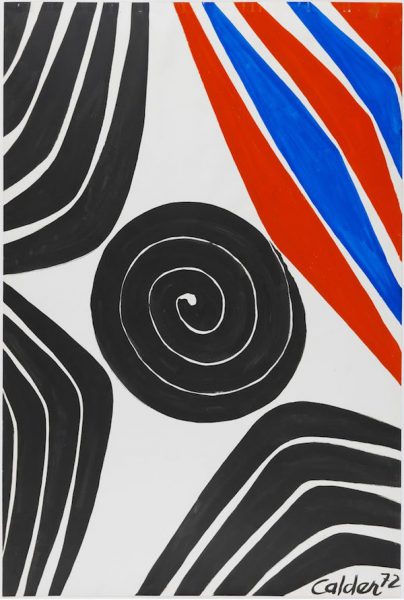 The extremely jolly exhibition of Alexander Calder gouaches, presented in a basement space at the Saatchi Gallery, is a real treat. Nothing moves – the images are firmly fixed to their paper support, but they have a great deal of joie de vivre – all the more so because quite a high proportion of them are figurative, and figurative representation is not something one associates with Calder’s work. Everything is adroitly stylised, but there is nothing that can be convincingly described as ‘primitive’ – certainly not in the rather ponderous feeling that adjective acquires when it is seized upon by academic art historians.

What I admired was a combination of qualities rarely found in supposed ‘progressive’ art today – Calder’s gouaches are genuinely playful, but at the same time they are sophisticated. So much so, that at moments I felt rather guilty for enjoying their light-hearted qualities so much. The show is a real release from the guilt trips that so many contemporary artists try to force upon their audience. The message here is: ‘Go ahead – enjoy!’ So I went ahead and did.