Self-described as “London’s most exciting art fair launch in a decade”, Art 13 brings a dynamic new art fair to the capital.  Over 120 galleries from 30 countries are showcasing exciting emerging and established talent at the Olympia Exhibition Hall.  What differentiates Art 13 from more established fairs is the embracing of the lesser known and a truly international focus. 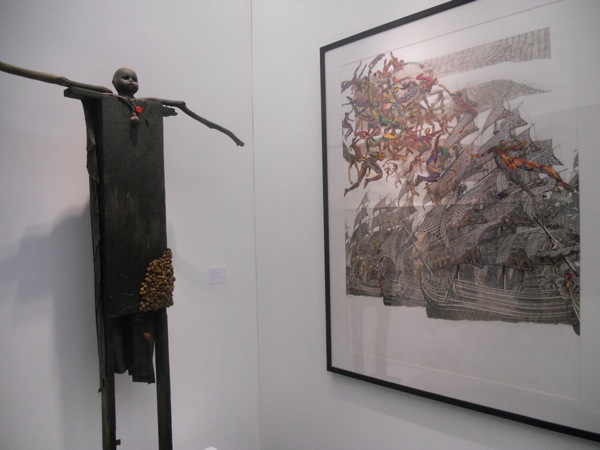 For a fair emphasising a broader global experience, London’s October Gallery is a perfect fit.  The display itself is a bit jumbled, showcasing all of the gallery’s major artists, but each artist is really spectacular.  Romauld Hazoume’s masks made of recycled objects find themselves in the company of an El Anatsui tapestry, and a remarkably intricate and moving pen and ink work by Julien Sinzogan. 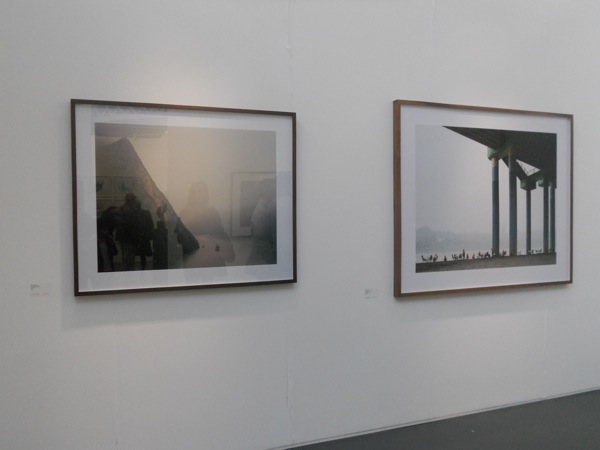 A gallery that rarely disappoints is London’s Flowers Gallery.   For Art13, Flowers divided their space in two – using half to show painting and the other half photography.  The resulting display is a bit disjointed but demonstrates the variety of talent represented by the gallery.  The paintings by Richard Smith and Bernard Cohen were not to my personal taste, but the photography of Nadav Kander and Edward Burtynsky makes a visit to the booth more than worthwhile.  The mundane and even ugly become beautiful through the lenses of the camera of these artists. 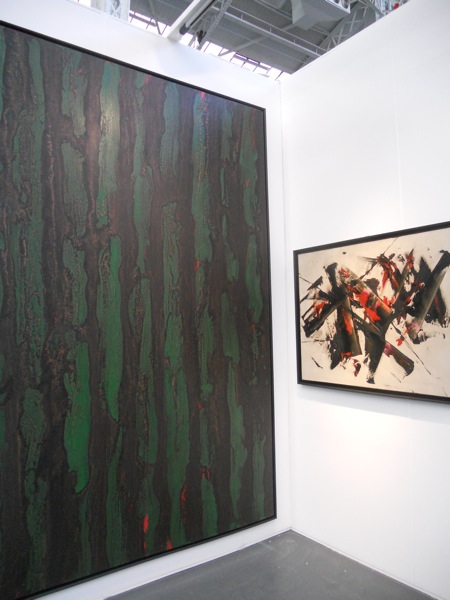 One of the stand-out displays was by Hungary’s Kálmán Makláry Fine Arts.   The gallery’s mission is to promote the work artists of the Post-War School of Paris, many of whom are not widely known.  Hur Kyung-Ae’s colourful abstract paintings are eye-catching and detailed without being overly worked.  Judit Reigl’s paintings from throughout her career are expressive and simple. 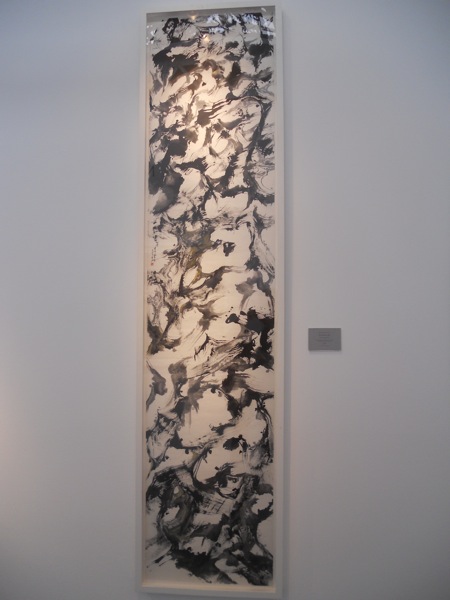 Michael Goedhuis began his gallery promoting historical Asian art but now also exhibits some of the best contemporary art from China.  The artists exhibited at Art13 use the traditional media of ink painting, but demonstrate that tradition is certainly not synonymous with staid or unimaginative.  In addition to elegant paintings, Goedhuis also exhibits a lovely “Japanese Bronze Vase from the Edo Period” (c. 1800) which demonstrates the lasting desire for aesthetic cleanliness and beautiful form present in the contemporary and historical works. 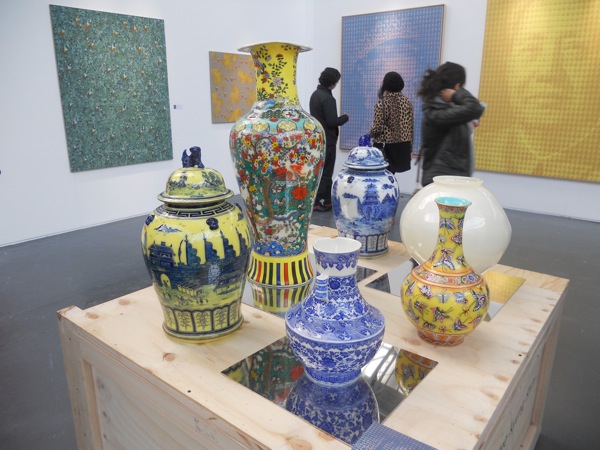 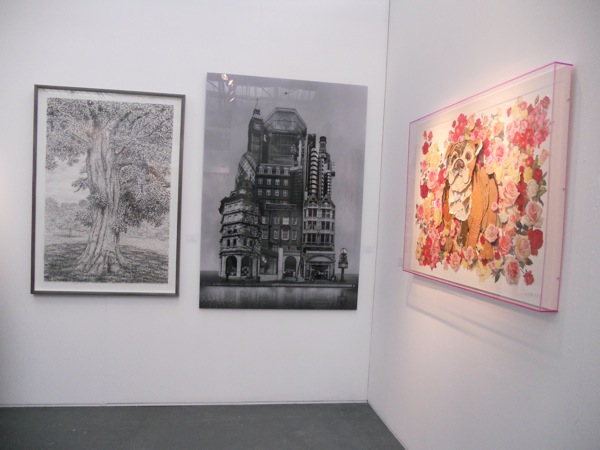 While many galleries demonstrate their international reach, Rebecca Hossack Gallery stays a bit closer to home and celebrates artists who use London as their subject matter.  Phil Shaw’s “Londonesi Subterraneis (set of 10 London Underground Lines)” creates fictional bookshelves, colour-coded by tube line with titles featuring the stops along each line.  “Archisculpture” by Beomisk Won combines iconic elements from London structures into one new building, more sculptural than functional.  Rebecca Hossack represents both Western and Non-Western artists, including many Aboriginal artists, so it was a unique and successful choice to exhibit works that did not conform to the fair’s international mindset.

Like Frieze and the London Art Fair, Art 13 has special sections devoted to the very new – London First and Young Galleries.  London First showcases internationally known galleries that have never exhibited in London before.  Galleries from the Middle East, East Asia, Europe, South Africa, and the USA are making their debut with Art 13.  Lisa Le Feuvre, the Head of Sculpture Studies of the Henry Moore Institute, oversees the galleries and exhibitions in this section.  Young Galleries are a group of 18 galleries that opened within the past six years.  Featuring some familiar London names: Ceri Hand, EB & Flow, and Hada Contemporary, the Young Galleries also introduces some new faces from Germany, Russia, South Korea, and beyond.

Punctuating the booths are installation and large sculptural pieces that form part of the Art13 Projects.  Above the entrance to the exhibition hall is one of El Anatsui’s monumental tapestries, entitled “In the World But Don’t Know the World” (2009).  Simple and elegant, Young-Jae Lee and Chen Guangwu’s installation “Earth, Ink & Fire” combines ceramics and ink of paper works.  Another work, “Soul City (Pyramid of Oranges)” (1967) by Roelof Louw, undoubtedly influenced the work of Felix Gonzalez-Torres.  In this work visitors are encouraged to remove an orange from the carefully arranged stack thereby altering the appearance and breaking one of the fundamental gallery rules of “no touching.” 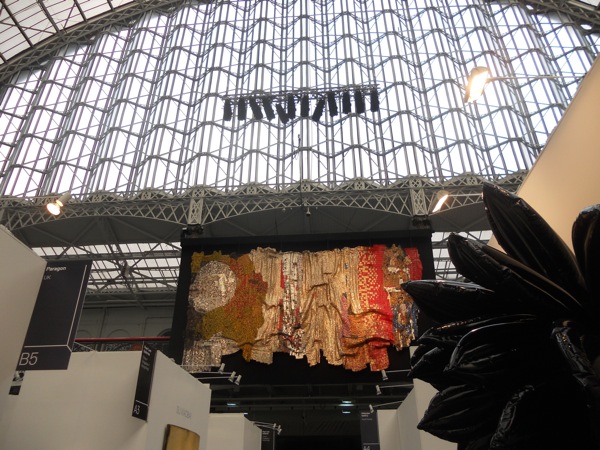 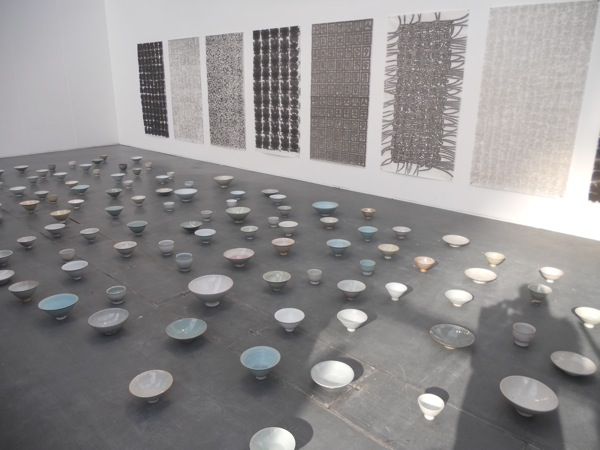 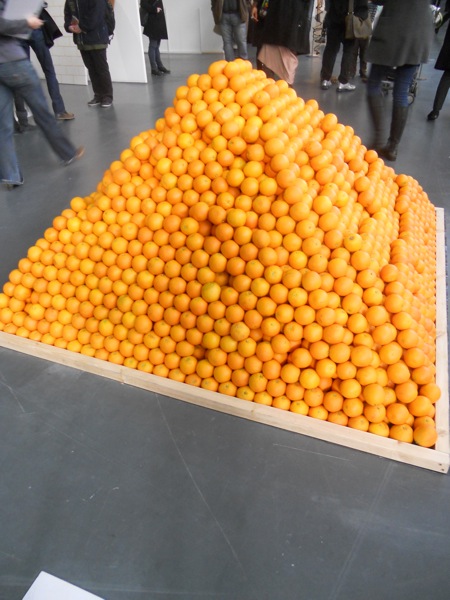 Those who visited Frieze and the London Art Fair may recognize a few works and artists from the other fairs, but Art13 has a refreshing mix of established and emerging.  Despite London’s international make-up, art in the capital tends to be largely western, and the exposure to new global artists is a strong point of the new fair.  Overall well organised and nicely exhibited, Art13 is easily digestible in an afternoon, and I look forward to future editions of London’s newest art fair.