Iranian born artist Farsad Labbauf reflects on the solar cycle. From where the sun rises in the East to where it sets in the West. He explains, “Our lives are continuously bound by the light and the shadow it casts. It is in this cycle that actions are performed and regardless of where we live those actions have consequences that affect the lives of others both locally and globally. 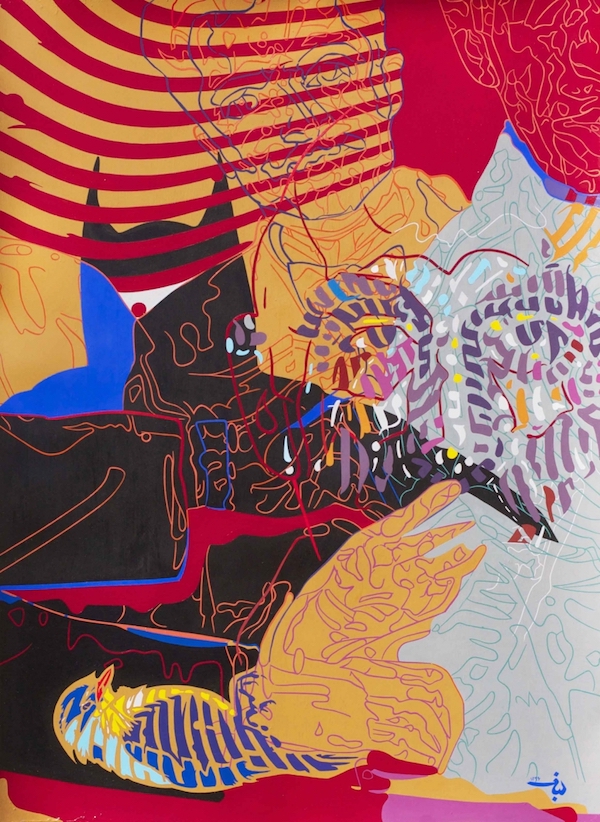 Farsad Labbauf The Light Of Your Shadow, 2018

The paintings are at once arresting and beautiful. Labbauf uses his signature lines and markings, but this time, with marvellous vivid rich jewel tones. I am in love with his portrayal of the masked Super-Hero with the accordion collar known as “Aristocratic Ruff” signifying excessive glamorization on an already glamorous character in the foreground, while in the background iconic female figure Shirin dances in the shadows. “I have named the female figure in Behzad’s painting Shirin because of the ancient Persian queen’s story. According to legend she had a very harsh and turbulent life but was a true model of a faithful lover and wife. She helped protect the Christian minority thru her influence and was a true Super-Hero!”

Red leaves float through the canvas displaying an openness to the elements. Labbauf goes on to say, “The leaves and the female image are all extracted and enlarged from master miniature painter Behzad’s imageries. I have taken some of the leaves enlarged and painted them in red…They signify nature and change of season but they are on fire; a metaphor for disruption and destruction of what is natural in the East and been set ablaze by the villain who is posing as a media and entertainment Super-Hero.”

“The Light of Your Shadow” alludes to allegories and figures who are “a direct reference to the theme of most of the paintings portraying the influence of the West and Western power in the East, Labbauf declares. From the removal of Dr. Mossadegh from power by the CIA in 1953 (Paintings: The Light of your Shadow and Unwritten History of Stains) to cultural infiltration through seductive forms of media and entertainment around the globe.”

The Mossadegh affair is a turning point in East/West relations since the once revered Prime Minister was responsible for taking control of the oil from the British and bringing democratic reforms to Iran. He tried to create a healthier economy and more reasonably balanced society, however, the CIA and the British authorities conspired to bring him down in an operation called AJAX which essentially made him a pariah and in 1953, was replaced by the Shah of Iran by the CIA. Labbauf displays these faces creating shape through lines with the namesake scouring product (AJAX) at the top, while ensconced in the wings of the Super-Hero emblem, an American eagle and an oil drum float in the chaos of history.

This show proves to hit all the right notes true to its theme. It is beautifully executed and wonderfully colorful and alive.

FROM MY EAST TO YOUR WEST or in other words, everything effects, everything, is an elegant and thought-provoking series. By using faces and symbols from Iran’s dramatic past and symbols of American iconography we see the causes and effects of the Wests influence in the East, thus the wake of its past still pervades our memories, influencing our present.