There happens to be quite a spectrum of feminist and what one might (maybe tactlessly) call ethnic exhibitions on view in London right now. They demonstrate rather amply the way the boundaries of the contemporary art world are changing. It’s significant that two of these happen to be on view in famous central London churches – one of work by Islamic women artists at St Martin in the Fields, the other, featuring Jamaican artists at St Stephen Wallbrook.

The patron of the show at St Martin’s is Queen Raina of Jordan and the works were first on display in Amman, before coming to London. This gives the event a link to the current Tate Modern show of work by Princess Zeid, of the unfortunate royal house of Iraq, who spent her last years in Jordan and whose son is still resident there.

I am, it happens, currently working on a book about contemporary Iranian photographers, which will contain a very high proportion of female artists, mainly of whom are in-your-face feminist, so the contents of the St Martin’s show are perhaps not quite as much of as a surprise to me as they may be to most of its visitors in London, of whom I hope there will be a good number. 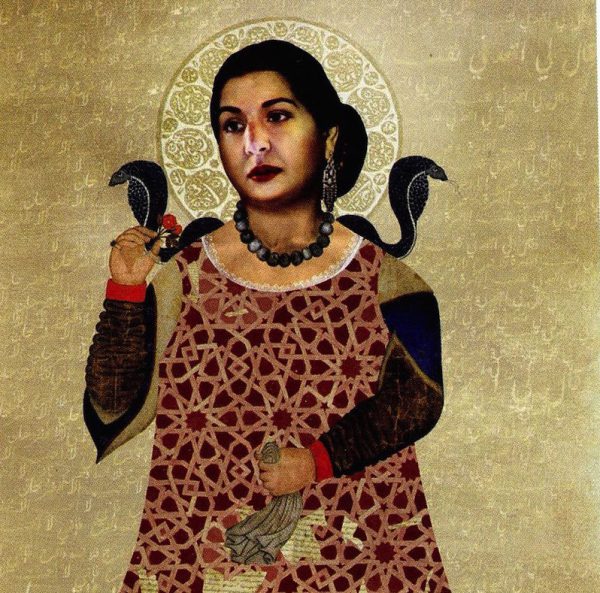 The temptation is, of course, to try and conflate all women artists, living and working in Islamic cultures, into one conveniently solid unitary group. The St Martin’s exhibition, entitled rather accusingly I Am, should put an end to any fantasies of that sort. The show is a clamour of individual voices. One striking thing about it, given Islam’s traditional hostility to art featuring the human image, is the

The number of representations of this kind it contains – with a great preponderance of females. There are other things – references to nature – but nothing that counts as full on abstraction.

The fascinating thing is that, while modern Islamic cultures seem to be rich in talented female artists, this doesn’t apply in other non-European situations. There are, for example, remarkably few well known Chinese women artists – fewer still, if you discount those who turn out to be living in Taiwan, or even in a totally non-Chinese context, such as Hawaii. Yet China is rich in successful business women, renowned for their toughness in making a deal.

Japan is different again. Quite a few female art stars there, among them the internationally celebrated Yayoi Kusama, who has had three major retrospectives in the USA (Museum of Modern Art, 1998; Whitney Museum, 2012; Hirshhorn Museum, 2017), plus another at Tate Modern in London (2012).

One is tempted to guess that, in modern Islamic societies, creative women may sometimes put an energy into art that, in a less restrictive social context, might be diverted elsewhere. And the visual arts offer a paradox. Figurative image is a very direct form of communication about how life is experienced, but this communication is symbolic – it reaches or can reach, a universal audience because it has escaped the curse of the Tower of Babel, and doesn’t depend on language. Yet at the same time images are much more inherently ambiguous than words. It gives one a lot to think about, but you can’t always be sure that the spectator standing next to you will interpret what you both happen to be looking at in exactly the same way. This, even if one is familiar with the cultural context within which the image has been made. Reaching out to the West, as they are doing in the event discussed here, Islamic women artists can’t even be sure of that. Which lends an element of mystery to this show. Is one being presumptuous, in interpreting these images in what is necessarily a western way?