As one of the most significant sculptors of the 20th century, Jacob Epstein pushed societal boundaries and confounded neat classification in his works. Contemporary street artist Louis Carreon invites the viewer to re-think aspects of reality and the place of all in the natural and constructed world that surrounds us. By reconfiguring the paintings and sculptures he creates, Titus Kaphar seeks to dislodge history from its status as the ‘past’ to unearth its contemporary relevance. In addition, each of these boundary-pushing artists grapple with religious themes.

Jacob Epstein, with Eric Gill and Henri Gaudier-Brzeska, was one of the wild things that revolutionised sculpture in Britain before the First World War. His early religious sculptures, including Ecce Homo, like much of his work apart from the portrait busts, were consistently derided. Ecce Homo, which represents Christ before Pontius Pilate, showing him with hands bound and a crown of thorns upon his head when he is presented to a hostile crowd before his crucifixion, was debated in Parliament and considered an outrage. The criticism came in part from antisemitic views that a Jewish artist should not depict Christ and from a racist revulsion towards his inspiration as found in Egyptian, Polynesian and African art. The sculpture embodies his sense of the great strength of Christ in the face of torture. 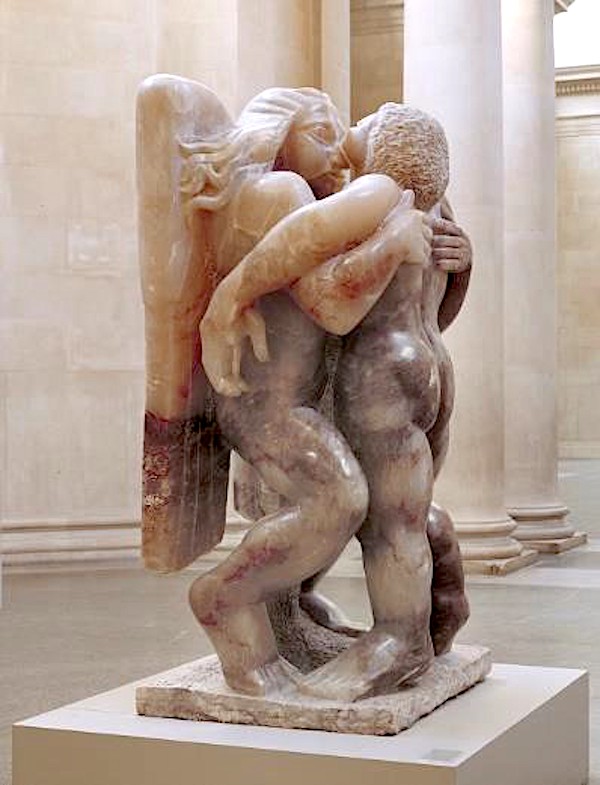 Jacob and the Angel, 1940–1, Jacob Epstein, purchased with assistance from the National Lottery through the Heritage Lottery Fund, the Art Fund and the Henry Moore Foundation 1996 | © The estate of Sir Jacob Epstein |

As a Jewish artist depicting the person of Christ, Epstein followed artists such as Maurycy Gottlieb, Samuel Hirszenberg and Mark Antokolsky while being roughly contemporary with Marc Chagall and Abraham Rattner, among many others. Such artists began by drawing attention to Jesus as a Jew before underscoring the injustice of anti-Semitism as part of improving interfaith relations. Such depictions also explored Jesus as a model of the suffering his fellow Jews had endured for generations. In Europe and the US, the First and Second World Wars led to a time of passionate artistic activity in which a modernist preoccupation with religion and spirituality was apparent. In particular, the image of the crucified Christ became, for many artists like Epstein, synonymous with the suffering endured through wars, most substantively in the Holocaust.

‘Epstein: Stories in Stone’ at Coventry Cathedral brings together significant works in a unique exhibition to celebrate the Cathedral’s Diamond Jubilee and commemorate some of Jacob Epstein’s greatest sculptures. Epstein’s monumental St Michael and the Devil is, of course, a significant part of the Cathedral’s history and the city’s contemporary landscape, as well as Ecce Homo, which sits entirely appropriately in the Cathedral Ruins. These permanent features of the Cathedral, together with his Angel doorknobs, are all located outside the Cathedral, while the other works are inside and paired with complementary aspects of the Cathedral’s art and architecture. His bust of Paul Robeson set by Coventry’s Cross of Nails connects stories of reconciliation after the Second World War and his Anne Freud by the Children’s stained-glass window connects stories of childhood.
His Jacob and the Angel from 1941 represents a turning point in the reception of his religious works, attracting praise and opprobrium in equal measure. The piece shows Jacob being held and supported by the Angel, who has been wrestling with him. Jacob’s exhaustion, with his eyes closed and his head thrown back, dominates the piece and highlights the personal yet universal struggle to find meaning in existence. Genesis and Maternity, both shown in the Lady Chapel, celebrate the wonder of pregnancy and the fact of reproduction as an essential part of life. ‘Stories in Stone,’ by showing these sculptures within the context of the Cathedral, provides a space for contemplation and reflection on our shared humanity.

At the Foundry in Dubai, Louis Carreon presents more of his recent Byzantine narratives, which update spiritual and religious iconography for the modern world. This updating involves riffing off imagery appropriated from El Greco, Gian Lorenzo Bernini, Peter Paul Rubens, and Michelangelo Merisi Caravaggio to disrupt and re-present images of the greats in ways to which young people can relate. The exhibition’s curator, Dr Ori Soltes, says, ‘History and art history, religion and culture and socio-economics, past and present and questions of future all collide, and like exploding hydrogen atoms, create the beginnings of new realities on the raw streets of Carreon’s canvases.’ 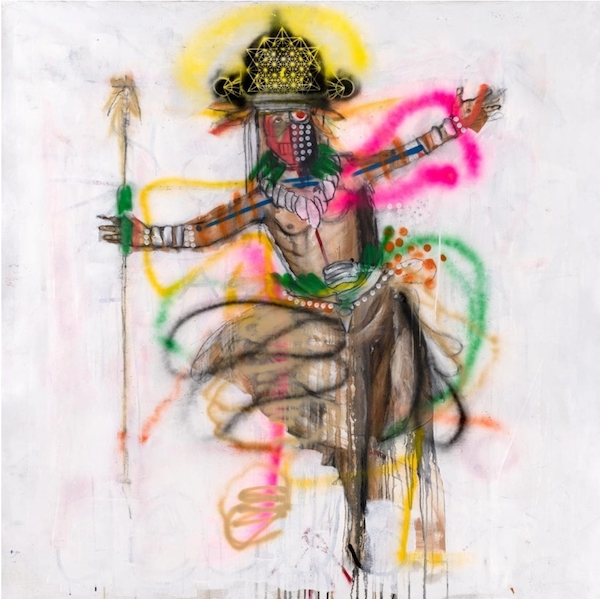 Carreon’s conversations with Byzantine and Renaissance Masters mix shamans and sacred geometry with modern-day street language and corporate culture relics. He seeks to hold onto a childlike sense of wonder at the vast and varied beauty of the world and translate that wonder onto the canvas. Carreon says he wants ‘to relate religious iconography to Shamans, plant medicine and the way people are raised in a modern-day conversation’ and is ‘speaking to those awakening on a spiritual journey.’

The exhibition’s title ‘The Child Within’ derives from a remark made by Picasso regarding the ability of artists to retain that childlike sense of wonder. Soltes notes that Carreon’s images are simple and aesthetically complex, whimsical and profoundly serious.’ This is particularly so with Carreon’s Ballerina images: ‘The Ballerina narrative is one of emotion and continual movement in contemporary Society. An individual’s discipline and passion versus the continual “erosion of dreams”, the battle against elements like social expectations, financial pressures, and the challenge to keep believing in yourself— is conceptually and visually linked to the ballerina’s challenge to raise, extend her leg, to balance and spin flawlessly on the point of her toes. The dripping and the faded style of spray pastel and acrylic paint takes the form and grace of the ballerina and slightly decomposes it to evoke raw emotion and almost painful feeling. In contrast, the beauty of ballerina—so briefly expressed upon the stage before it disappears into the backstage of life and advancing age—still perseveres through the darkness of the canvas.’

With ‘New Alters: Reworking Devotion,’ Titus Kaphar explores what it might mean ‘to produce a contemporary devotional structure within a secular art world—especially in the context of a European art historical tradition dominated by religious imagery and architecture—and what parallels might be drawn between artistic and spiritual practices.’
Kaphar’s work is characterised by a layering of imagery and form, which establishes a complex material and conceptual stratification within gilded frames, which act like proscenium arches framing a stage. He reconfigures works by cutting, crumpling, shrouding, shredding, stitching, tarring, twisting, binding, erasing, breaking, tearing, and turning the paintings and sculptures he creates. In this way, his stages and stories expose structures that are typically invisible underneath, behind, or inside the canvas. These are either laid bare to reveal the interiors of the work or open areas to become active absences.

This reconfiguring, as with The Eye of Providence or Topography and Desire, reveals unspoken or lost truths about the nature of history and investigates the power of rewritten histories. With Shroud of Washington, Kaphar cloaks a life-size female figure in a painted reproduction of John Trumbull’s General George Washington at Trenton. Washington’s distorted image, dressed in his military uniform, smothers the woman beneath it, underscoring the former president’s problematic legacy.
New Enunciation combines references to nineteenth-century photography and Renaissance painting to reimagine the biblical tale of the Annunciation, in which an angel visits the Virgin Mary to tell her that she will give birth to Jesus. Kaphar recasts the scene’s characters to show this ‘glorious message’ being delivered to a Black worker in front of a broken-down car, surrounded by a field full of enslaved individuals, a reminder that the Magnificat – the song of Mary following the Annunciation – pictures God as putting down the mighty from their seat and exalting the humble and meek.

In From Whence I Came, Kaphar addresses the representation of race in Renaissance Christian iconography. Even though many biblical stories occur in the Middle East and Africa, in Renaissance Art, Christ and his followers are almost always depicted as Caucasian. By duct-taping portraits of black figures over the white characters in this Flight into Egypt, Kaphar invites his viewers to question the legacy of this misrepresentation.

The Annunciation also features Genesis Tramaine’s ‘Break of Day’ at Almine Rech in New York. With this show, we are, as Roxane Gay writes, at ‘the dawn of things—blood, sun, moon’ where Genesis Tramaine is at her most potent. In this new show, ‘the breadth of her power, the breadth of God’s power as it moves through the artist, is on full display.’
‘Crossings’ is an outdoor art exhibition in Toronto with different locations which allow one to make a ‘pilgrimage’ to the various stations. The artworks are created by 16 Canadian artists in response to the Scriptural Stations of the Cross. They are uniquely relevant expressions capturing both the Passion narrative and its implications for our world. 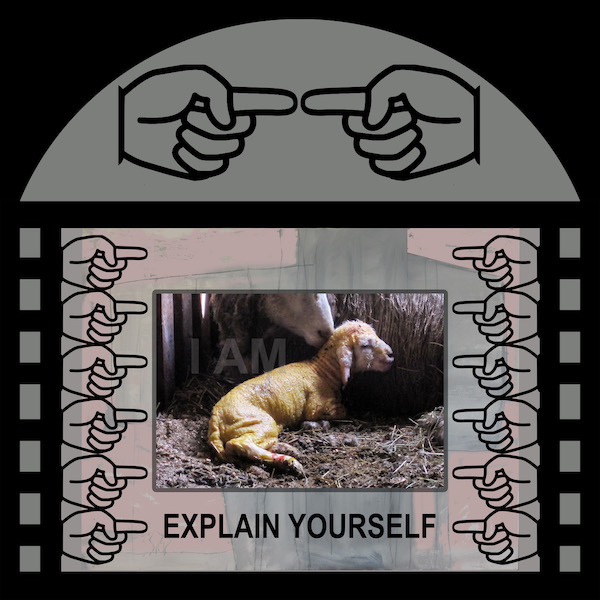 One of the artists featured, Betty Spackman, is also finally able to show ‘A Creature Chronicle,’ an installation that combines the stories of both science and religion using well-known artworks as mediators and commentators to explore ethical concerns in both fields regarding transgenics and the development of posthumanism. Presenting itself as a non-linear multi-layered storyboard, this work is meant to function as a catalyst for dialogue – a physical presence to be walked around and sat inside, with visual stories to be ‘read’ or discovered, contemplated, and discussed. Initially scheduled for display in April 2020, the installation in British Columbia now comes with an enhanced festival of discussions and concerts alongside to explore further the themes of his exceptional work.