The new show by Jake and Dinos Chapman at Blain-Southern – their first outing with this prestigious dealer, offers a full-on re-interpretation of Goya’s Disasters of War, plus, on pedestals in the centre of the room, some full-size bronze versions of suicide vests.

The overall title the artists have chosen for their show, ‘The Disasters of Everyday Life’, more or less says it all. The world we now live in, (so the artists are eager to tell us) is in every part and region a disaster zone. Here is a full survey of Goya’s work, subverted in every way the artists have been able to dream up, from added cartoon characters to layers of glitter. The contemporary condition, so they tell us, is a hopeless case. All the audience can now be asked to do is giggle, because we have gone beyond indignation and certainly beyond shock. 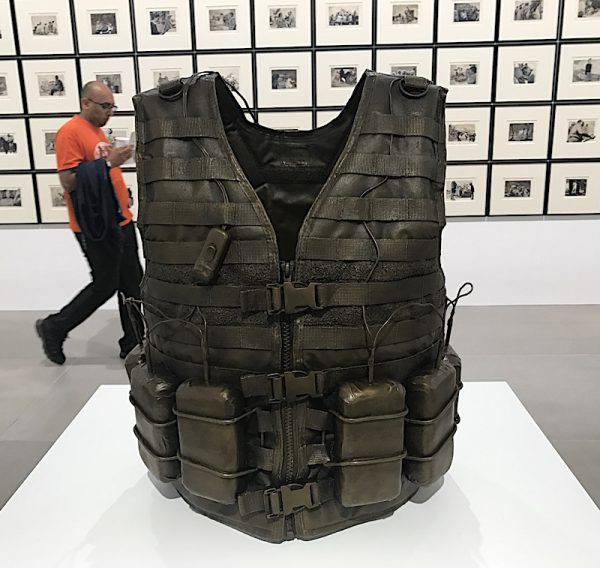 An array of suicide vests cast in bronze, placed to plinths in the middle of the gallery space, serve to reinforce the nihilistic message.

Looking at Goya’s prints in their original form, it’s a little difficult to believe that the world, terrifying and dangerous as it so often seems, is, in fact, worse than the Spain of the period of the Napoleonic Wars as depicted by Goya. It is also difficult to believe that what we now have is worse than the state of things in much of Europe, as depicted by Jacques Callot (1592-1635) in his Les Grandes Misères de la Guerre – a series of prints that depict the horrors inflicted on civilians dour the Thirty Years War of the early decades of the 17th century. Otto Dix, in his series of prints Der Krieg, publish in 1924, in the wake of World War I, also has something to say about this kind of subject matter.

Where the three earlier series of prints just mentioned are concerned, it is easy to believe that some of the terrifying events depicted were directly witnessed by the artists. One of the prints in the Disasters series (No. 44) is in fact captioned ‘This I saw’, to certify that Goya, in this instance, was indeed personally present. This cannot have been the case with every print, even those that appear to tell the spectator no more than the facts. Where many images are concerned, he must have relied on descriptions provided by others. One extremely gruesome example shows a naked man having his genitals hacked off by a Mameluke (Arab) soldier of the French Imperial Guard, while other soldiers from the same corps look on. A famous painting by Goya, the Dos de Mayo, shows the Mamelukes in action against the rebellious inhabitants of Madrid on 2nd May 1808.

It is pretty clear that the Chapmans themselves cannot have witnessed, either directly or indirectly, incidents of this kind, even though we now live in the age of 24-hour television news. It is also clear that Goya’s Disasters have been a long-term obsession in the artists’ work. There was, in the 1990s, a series of sculptures derived from them, then, a bit later, an earlier series of altered prints, entitled Insult to Injury, and shown as a component of a Chapman Bros. show entitled The Rape of Creativity, held in May 2006 at the Museum of Modern Art in Oxford.

When reviewing this event, more than ten years back, Jonathan Jones of The Guardian noted that: ‘One reason for altering 80 original Goya prints is that it may finally offend the people the Chapmans see as their target – an audience in which they include themselves; the liberal, humanist, gallery-going chattering classes.’ In this mission, they seem to have failed.

The current revival of the same ideas simply replicates an old story. The target audience that didn’t get it the first time around seems doubly unlikely to do so now. Goya himself, though long dead, has arguably more important things to tell us. Since prints are multiples, not single originals, you can always get back to what Goya really wanted to show you.

Word has it that the show was a virtual sell out on the first night.