A small confession to make here: I wrote a brief text for the catalogue of this show because Jamaica is where I originally come from. The subject of the exhibition is Jamaican art, manifested in its relationship to religion.

The feeling is not absolutely always related to the Christian faith. There is a fine Art Deco bronze here, representing Orpheus with his lyre, in a state of ecstasy. It is the work of Edna Manley, generally considered to be the founder of a recognisably Jamaican school of artists. She was also an important political figure, married to Norman Manley, one of the chief pioneers of Jamaican independence, leader of the Jamaican Peoples National Party, Chief Minister from 1955 to 1959, and Premier of Jamaica fro 1959 to 1962. 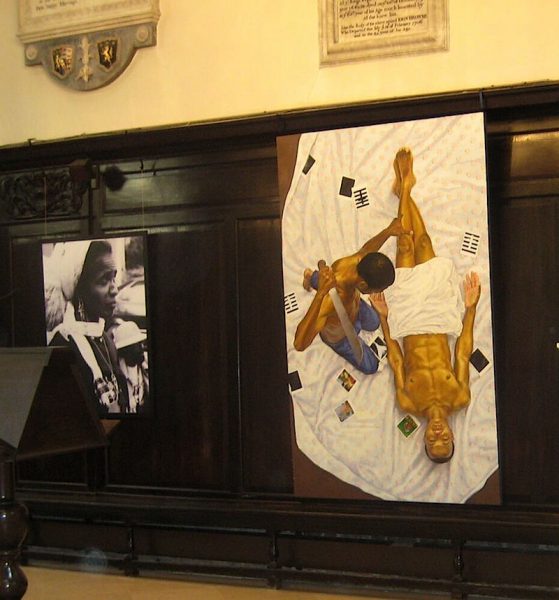 When people think of Jamaican religious art, they mostly think of work connected to Rastafarianism, and in particular to that produced by a generation of self-taught so-called Intuitives, whose images are quite closely connected to those made by Haitian artists inspired by Voodou.

There is little or nothing of that here. The spirituality that undoubtedly pervades a great deal of the art made in modern Jamaica tends to be cozily domestic, showing religion as part of everyday life. It also demonstrates a quite frequent resistance to being categorised as ’ethnic’ – that as being in some way necessarily Africanising. The images displayed at St Stephens are about seeing Jamaica is it actually is, not as some lost fragment of African culture, transferred intact to a different hemisphere.

If it shows little or no affinity with the art of neighbouring Haiti, it also has not much in common with the Modernist art of Cuba, Jamaica’s other close neighbour. There is nothing that comes from politicised Latin American Modernism, and no trace of the French Modernist ideas that Wifredo Lam brought with him when he returned to Havana from a long European sojourn on the outbreak of World War II.

What the s how demonstrates, in fact, is a kind of relaxed familiarity with the idea of the spiritual as a part of everyday life. It doesn’t press the point or seek to proselytise. When the idea of Africa is stressed, as it occasionally is, this is to make a specific theological statement. Christopher Lawrence’s icon-like portrayal of an African Christ, which adorns the cover of the exhibition catalogue declares that Christ exists as a Saviour for all mankind.