British artist James Alec Hardy is interested in the mysterious liminal space between knowing and not knowing, fact and fiction, and much of his work explores this in-between state through a practice he refers to as ‘perception management’ or put more simply, playing with the direction of gaze.

For his first solo exhibition, ‘Some Things are Clearer in the Dark’ at Kristin Hjellegjerde Gallery in London, Hardy explores the dominance and pervasiveness of media through constructed portals, a concept the artist terms as ‘doors in doors in doors’, implying the endless possibilities or routes we have for perception. These entrance ways are sculpted from multiple screens showing hypnotic, psychedelic videos of highly saturated, sliding patterns and abstract symbols that overlap and merge into one another in a long, continual loop. Built against three walls, the screens bombard the viewer with conflicting imagery that both replicates the disorientation induced by modern-day advertising and pulls us into a seductive digital world that’s revealed to be an illusion by the exposure of the back stage mechanics (machinery and cables tangled in a heap at the bottom of the walls). While this contrast might initially appear clumsy and even uncomfortable as we linger on the longing of wanting to be transported fully into the illusion, it’s central to Hardy’s thinking. 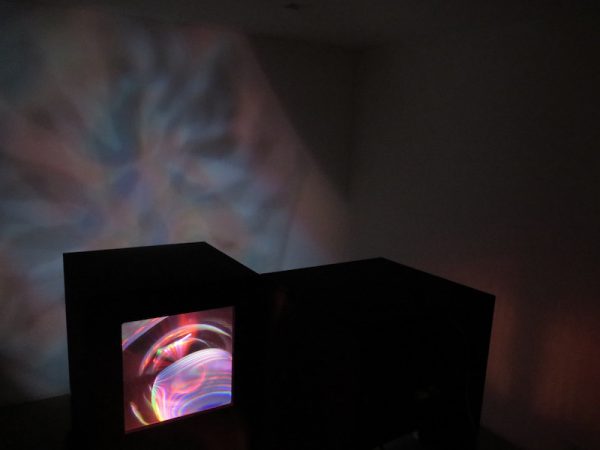 The most captivating part of the exhibition lies behind a black curtain in a room vaguely reminiscent of James Turrell, where Hardy’s bespoke built video projectors cast faintly coloured geometric patterns and flickering shadows on the walls to the throbbing sound of static (perhaps a nod to the fading presence of the analogue age’s heart beat as we make the full transference into a world of silent technology). It’s a deeply immersive experience and as calming as it as unsettling as the eyes attempt to focus on the ghostly, moving shapes that surround us. While the vibrant installations in the main half of the gallery are arresting and overwhelming in their colour and complexity, the fragility of the imagery here forces us to concentrate harder on what we’re viewing and settle into the experience without distraction. The screens themselves pay homage to camera obscura, channelling Hardy’s belief that the analogue past can help us to better understand and recognise the illusions that are presented to us by technology.

In a world that’s increasingly lived through and on the screen, the exhibition forces us to consider the simulation of reality and the sometimes deceptive nature of own gaze, encouraging us to develop a more honed awareness of what goes on around us.

James Alec Hardy is an English video installation artist (born 1979, Colchester) was educated at Camberwell College of Arts, London. Sceptical of the ways in which new technology lends itself to the entrapment of minds using specialised propaganda and manipulated suggestion, Hardy creates work that subverts and repurposes old technology. Using obsolete analogue equipment, arrays of monitors are symbolic motifs, simple tribal shapes are interrupted and reconstructed, and video sequences are performative, produced by the physical manipulation of machines. Video acts as a physical and sculptural object rather than a virtual electronic portrayal of image and sound. Immediate and sensitive, it conveys his ideas directly in our age of high video literacy, functioning as the meditative stage for the mind and unravelling its own truth by suggesting that truth and narrative are, ultimately, subjective. Recent solo exhibitions include Some Things are Clearer in The Dark at Kristin Hjellegjerde Gallery (2017),  Totems of the Eclipse Maximum, Artmoor House, London (2017),  Modular 1304, ArtMoorHouse, London (2013), Trapped in the Machine, The Hospital Club, London (2013), and Decadia Broadcast System, Home Front, London (2012), while group exhibitions include Asemic, Kristin Hjellegjerde Gallery (2015), No Alarms and No Surprises, Ritter/Zamet, London (2015), Mackerel Sky, Whitechapel, London (2015), Oscillate Wildly, South Kiosk, London (2014), and James Alec Hardy Dominic Beattie, The Depot Gallery, London (2013). Hardy lives and works in London.