Where are the black artists in the galleries? We think it’s bad now, what about during the 1980s? The early 1980s before Basquiat?

No wonder Jean-Michel is angry, although he doesn’t look angry, he looks cool in the photos of him painting on a massive scale, he looks cool in all his photos, with his playful tufts of strong young hair tied up in fashionable bunches. Maybe he diverts anger into productivity. He is prolific. He is concerned with absence, the absence of black art on gallery walls yet has to make marks, which are a presence, the presence of black art to the galleries. It’s all a contradiction. He only has a short time, though he doesn’t know it. Who has done more with such a tiny window? 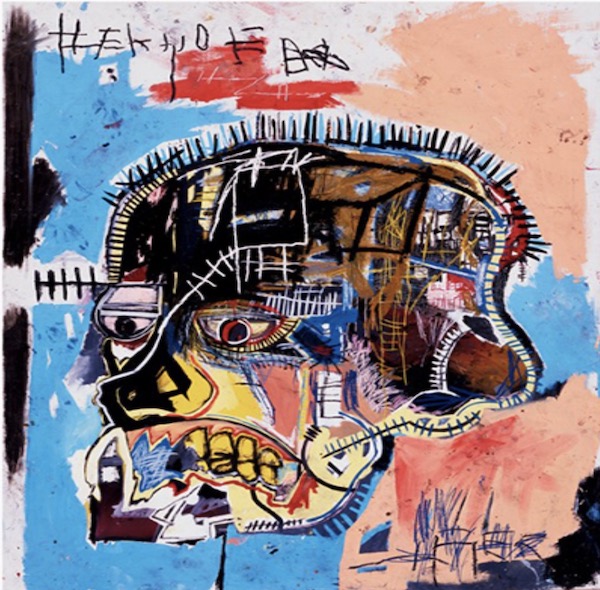 I should be more familiar with his work than I am. Most people who write about art are. He is a hugely significant painter, well known, frequently reproduced, born in Brooklyn, died in New York. I need to educate myself, but the scale of this show is overwhelming. From Heads (1981-1983) and Riding with Death (1988) I can’t believe the quantity of output. It is as if he is addressing the absence of black artists in gallery frenetically, he’s crazily doing what he can. Who am I to talk about black art? This is tough.

I would have felt more comfortable starting this Basquiat show at its end than at the beginning. Isn’t it generally a problem with the Gallery format of a retrospective of a life’s work? You have to go round the works room by room in the designated direction.

When a curator arranges the work chronologically, it’s true that you don’t feel the hand of the curator too obviously. This kind of arrangement helps the gallery goer get a biographical understanding of the artist. But I couldn’t find my way into the work, not as a journalist. I couldn’t get a hook, going from beginning to end, from early to late.

When I reached the end of this madly long, vibrant, full-on exhibition of huge canvases, mind-scrawls, observances, scribbles, boxers, fighters, tins of paint slashed onto doors and whatever was there I was a little tired. The scale was just so big. Not just the scale of the individual work but the amount. I was tired of looking for meaning, of thinking about what I was going to write.

Then the last room, when I was about to give up, surprised me. There was the picture that I had been looking for. Eyes, eyes popping and spurting over the canvas. Exu, 1988. Acrylic and oil stick on canvas.
I had never seen this work before, but I was confident that this was the piece I wanted to find that helped my mind put together a picture of Basquiat to which I could relate. I felt slightly alienated by the landscapes of New York, by the boxers, who, even if they are sensitive are also macho, and by the irony of negro policeman and by the kickback of graffiti on the urban man, because I am white.

I am also not Yorùbá, but I have a connection with the god Esu that is recent and vivid through my friend, the poet Kọ́lá Túbọ̀sún. He is an award-winning campaigner for Yorùbá language and literacy and has written passionately on how the god Esu is not Satan. When the bible was translated into English, the word Esu was used as a translation for Satan. Yet this trickster, challenging god is not the devil.

I can see that in his later work, Basquiat is connecting with African heritage and he has been drawn into Esu’s orbit. I can see why. He’s a fascinating character, a mischief maker, a trouble-maker. In an intriguing story, recounted to me by Kọ́lá the god is walking past two friends on either side of the road. These are good friends. They have many conversations, they agree, they disagree but never fall out. Esu walks between them wearing a hat. On one side his hat is red, on the other it is blue. Did you see that man with the blue hat? One friend asks the other. Yes, but his hat was red! And so the argument begins that not only stresses their relationship but leads to its breakdown. This figure who challenges human complacency is the god Esu. He brings contradictions and difficulties into the world. 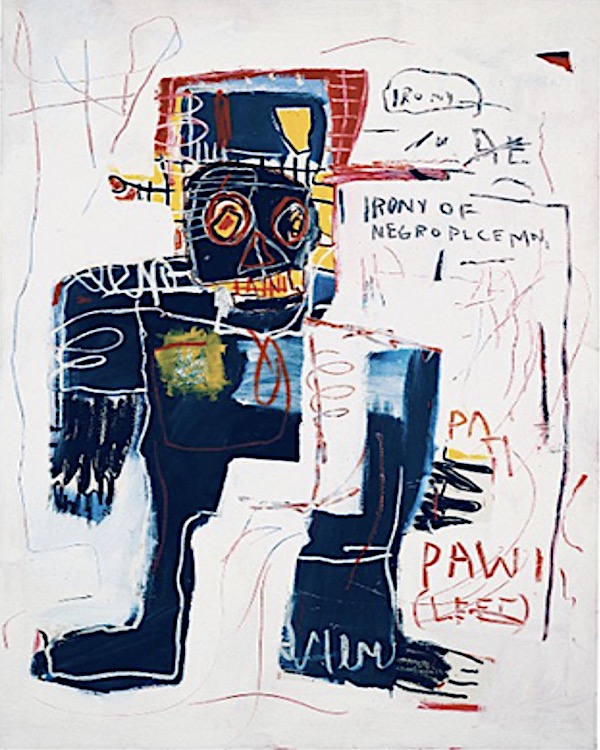 I think Basquiat identified with Esu. I see it in his paintings on this day, in this cultured West End Paris, having walked the big shopping boulevards and on through the leafless trees of the Bois de Boulogne. Perhaps his awareness of his own racial identity in New York made him feel an interloper although he belonged. He observed he copied with his own, deliberately naive hand, wielding colour and thick, gestural line.

Through the static but expressive art of paint, he challenged us to think again about what we saw. The value of things. The value of streetness. Its commerciality, its reproduction. With the leader of the pack, Andy Warhol, his work got the opportunities it needed to grow in scale. But where could it go? It sprawled bigger and more prominent in its ingenious clumsy manufacture – the big palette style joke of a wooden Charlie Parker record or the walls of downtown New York reimagined on canvas. Like Warhol he’s playing with issues around what Walter Benjamin put so well in his famous essay, ‘The Art of Mechanical Reproduction’, looking at how the art world resists attacks on its allure, the bizarre relationship of power, money and imagery. It is entirely appropriate that the exhibition is in this insanely scribbled building of glass and water, where fashion greets you at the entrance with a monogram and eyes up your improper dress from its tent for the privileged exhibition visitors.

Before I found the figure of Esu to help me make my connection with Basquiat, I was disturbed by how cool he was. He seemed the kind of person who would be good company, who would not be an artist riddled with self-conscious doubt. His work shows how he was interested in language, in music, in painting technique, in deconstruction. I felt that there was little to challenge me. In fact, I had not looked at his work directly because it has been so influential at art schools. Of course with its colour and its ubiquitous robot-icons it has been impossible to avoid his work, and why would I want to? I wasn’t going out of my way to avoid his work, just side-stepping it slightly.

Later, returning to the UK on the ferry I stared in the moonlight over the side of the boat at the seagulls, lit from underneath by the light bouncing off the sea. The white rail was scratched with casual teenage graffiti. Initials, capitals, repeated arranged with the random, unconscious strokes of a hand that is not creating work for judgement, not entirely automatic, but rough and simple, coping with inappropriate materials for sophisticated mark making. Writing something that was part private and part public. Not for a gallery, not for an examiner or a school teacher. At that moment I was back with the white walls staring at the mind maps of words, repeated, misspelt, thrown onto the canvas, and I got it, or I got something. I understood why it was relevant, as a vision of another way of seeing.

I still think Basquiat is too cool for me. But that’s okay, he’s stylish he’s choice, and he’s important. You didn’t need me to tell you that, and to be honest, because Basquiat’s work reproduces so well, perhaps you do not need to visit this vast exhibition in person. But it’s quite something. It’s enormous and exhausting, full of fried chicken, disagreements and huge bogeymen-heroes stomping and smashing their way through effete Western historiography.

I leave you with his homage to Paris and Warhol. The Eiffel Tower, duplicated and collapsing, the opposite of digital clarity. It’s falling over, it’s losing its lustre, its metal struts warping and melting. Basquiat isn’t telling you what to think, he shows you how things are. Does it challenge you?

In Kọ́lá’s story, Esu never returned to see how things were working out, or to dispense some moral summary and interpretation. That’s up to you. If you choose to fight about points of view, that’s not the fault of a god or a demon. It’s yours.