Drawing was once considered one of the cornerstones of Western art.  The reason for this is simple: if art was to be accurate and representational, then one had to learn how to draw first before one could paint or sculpt. For an example of how the practice of drawing was once considered to be so integral to the practice of fine art, one need look no further than to the Royal Academy of Painting and Sculpture in Paris during the seventeenth century, which was the largest and most influential academy in Western Europe at the time.  All classes were taught at the Louvre, and all students were expected to follow a rigorous, three-step drawing curriculum.  Initially, students were allowed only to draw from other drawings.  Then, they progressed onto drawing from plaster casts and antique sculptures before finally being allowed to draw from live models.

Of course, the field of contemporary art has opened up dramatically since then to include a myriad of artistic practices which do not rely on drawing.  Photography, video and performance art are just a few examples of some of the new and groundbreaking art forms to emerge in the last century.  Against this backdrop of innovation in contemporary art, it may not be surprising that the age old discipline of drawing has not been without its detractors in the present day, who may the act of putting pencil to paper as a quaintly old-fashioned tradition that belongs to the hallowed walls of history.

However, nothing could be further from the truth, as Artlyst discovered when we recently visited the Jerwood Drawing Prize (JDP) exhibition in London.  The JDP has become an important annual event in the British art calendar, not least because it is the largest and longest running open drawing exhibition in the UK.  The competition attracts in the region of 3,000 entries from a diverse community of artists across Great Britain who include a mix of students, art outsiders, art insiders, emerging artists and established artists.  In rebuff to the naysayers, the sheer volume of contestants testifies to the continued relevance of drawing in contemporary art.

Each year a selection panel of three people shortlists drawings for the exhibition and selects the winners.  The composition of the panel changes annually, but typically includes a diversity of art professionals ranging from practising artists, to writers, university tutors and curators.  As a result each year’s exhibition has a different look and feel, depending on the priorities and focus of the judges in that particular year.  In 2011, visitor numbers peaked at just below 25,000 for the overall exhibition tour (which travels around Britain after leaving London).

In contrast to much of the fast food art that we see today (which is easily made, quickly consumed, and readily destroyed), drawing is often a very labour intensive exercise, which requires rigorous execution.  One of this year’s judges, Kate Macfarlane, the co-director of the Drawing Room summed this up succinctly when she commented that it “takes a long time to conjure a sizeable image out of tiny pencil strokes, or to create an undulating surface from a series of pinpricks, or to fashion a shallow yet rich space from cut paper.”  Macfarlane also noted the staggering variety of the work received for the 2012 JDP exhibition, which “provides a snapshot of some of the current applications of the medium of drawing”.  Innovative uses included animated drawings, (such as Karolina Glusiec’s Velocity, which was the overall winner), works that pushed drawing out of the frame and off the wall, observation drawings made on sketchbook pages, penmarks on photographs and etchings.

Some of the highlights include the following: 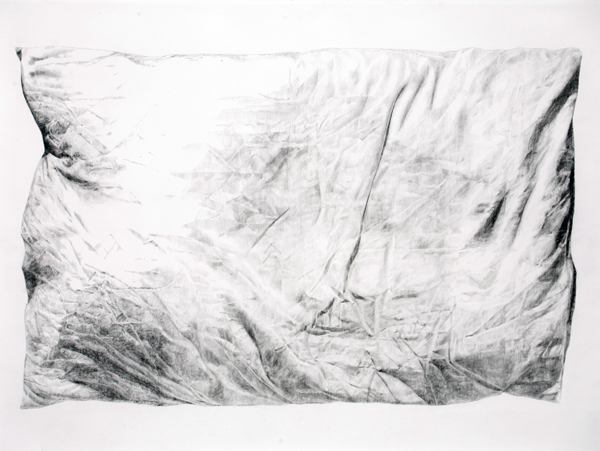 Wood’s precisely rendered drawing of a pillow explores the fragility and preciousness of life explored through the close study of surfaces disrupted by human actions.  In this piece, the artist seeks to capture the traces of existence, by documenting unrepeatable creases and folds, elevating the ordinary to the extraordinary. 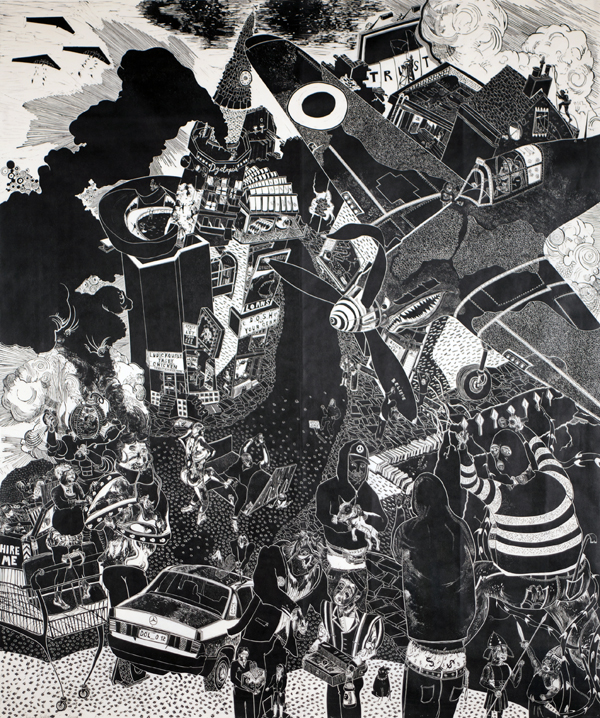 The starting point for Galloway’s dark narratives is the world around him – whether it is at the local barber, in the pub, or rising at pre-dawn to accompany dustmen on their morning rounds.  Using his vocabulary of marks and motifs, the artist has conjured up a surreal high street of London hangouts where all the sinners and saints take their roles in his morality play. 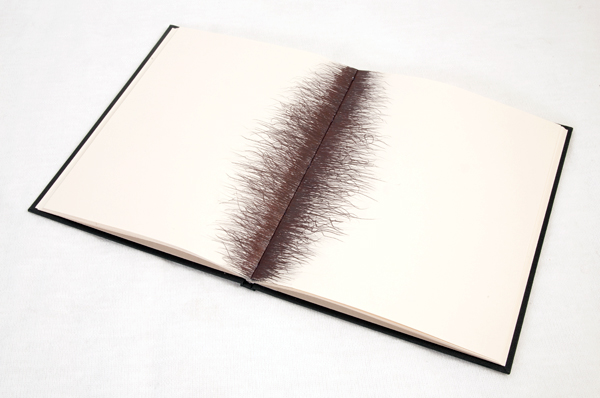 Adler’s practice explores the notion of uncontrolled and unwanted growth.  Her drawings operate on two levels: firstly as a personal investigation of physical mark-making and repetition using the most basic of tools (in this case biro on paper), and secondly as an allusion to humankind’s uneasy relationship with the world we live in, and our underlying fear of nature out of control. 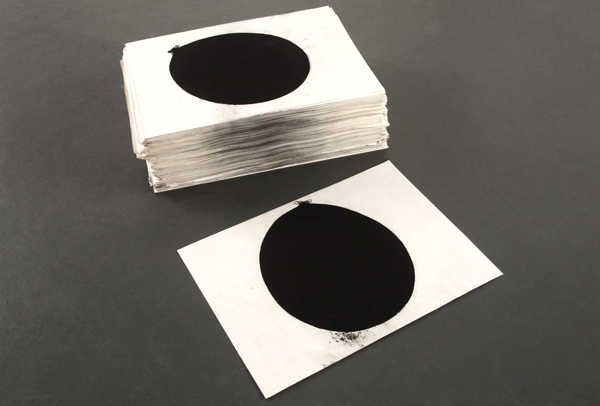 Kim says that the idea for her first black balloon drawing arose spontaneously from the image in her head of a balloon filled with a deep black breath.  She says that hundreds of balloons came after that, all unplanned, each drawing as natural to her as breathing, and then she was done. 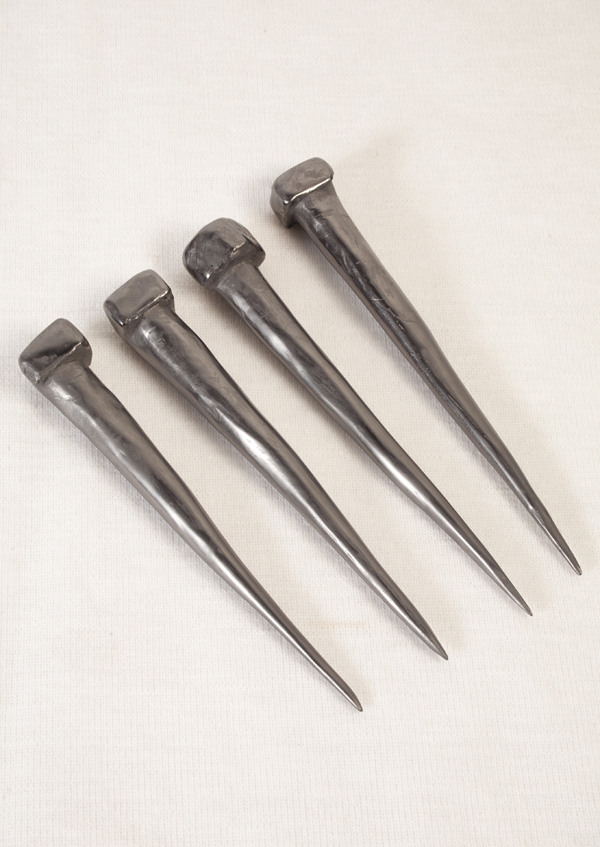 Pincis was drawn to balsa wood because of its uncanny lightness.  He began to whittle the wood away in attempt to uncover archetypal shapes, in this case tent pegs.  The artist explains, “On the one hand it is the material of the model maker, and thus domestic and hobbyist; and on the other hand it is an exotic wood that made the Kon-Tiki, which crossed half an ocean.” 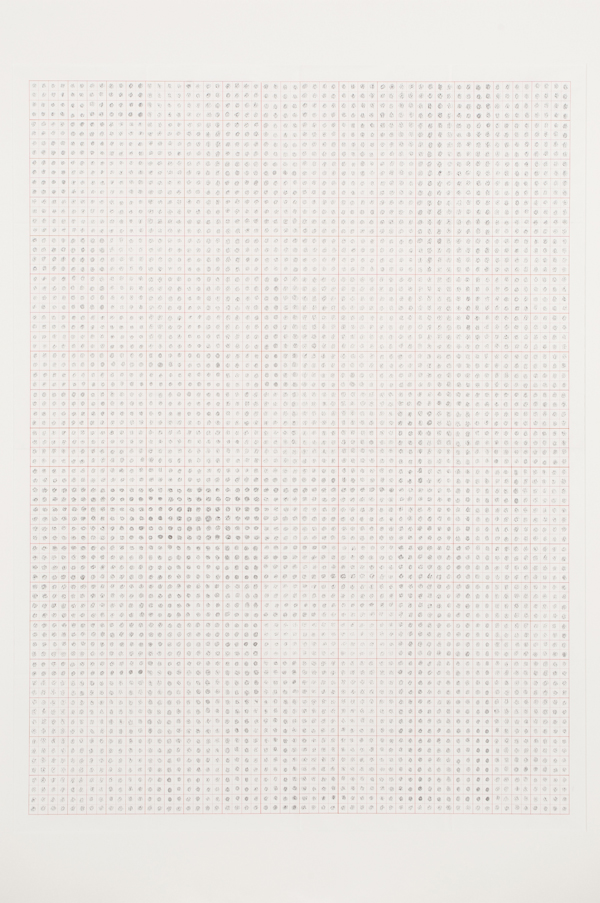 This piece celebrates the individualism of repeated marks and the relationship between process, artist, and environment, which its reproduction in photo format somehow does not do any justice.  Each of the 4,256 cells is generated by the same method, but no pair is identical, reflecting variations in the surface on which it was drawn.