There can be no doubt that the new show devoted to Turner at Tate Britain is a meaty affair. The gallery is fortunate in the fact that a great deal of Turner’s legacy is in its own possession, and that other British galleries also own important examples of his work. In present circumstances, with the coronavirus still raging, this will have saved the organisers a great deal of trouble.

Turner was undoubtedly a world-class artist, and his career spanned a remarkable era – ELS

There are a few loans from America, to which the exhibition will in due course travel, but no substantial gaps in the narrative. Just once have those in charge been forced to substitute a good reproduction for the real thing. This is The Slave Ship, (originally titled, Slavers Throwing overboard the Dead and Dying—Typhoon coming on) now in The Museum of Fine Arts in Boston. In the epoch of ‘Black Lives Matter,’ it would have been impossible, perhaps to leave this out. It is now one of the best known of all Turner’s images, together with The Fighting Temeraire and Rain, Steam and Speed, both of which are duly present. 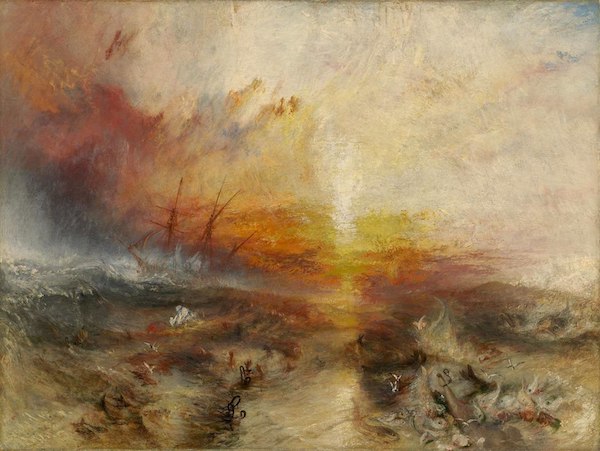 Turner was undoubtedly a world-class artist, and his career spanned a remarkable era, one during which Britain established itself thoroughly as a world power. First, there was the French Revolution, then the Napoleonic epoch. The Industrial Revolution took place and played a large part in establishing Britain’s economic hegemony, which endured, once Napoleon was defeated and packed away to die in Saint Helena, for the rest of the 19th century. Turner’s paintings chronicle these developments with supreme energy, with images that catch the essence of a world in the process of change. Sometimes he offers emblematic images of things imagined but not in fact seen. An example is the painting of Napoleon in exile, in the remote island to which he had been consigned by the victorious British. The Exile and the Rock Limpet, painted in 1842, shows him as a much=diminished figure, guarded by a single British soldier.

More often, his major paintings convey both the excitement of things actually seen, and at the same time convey their iconic and/or prophetic significance. The Fighting Temeraire and Rain, Steam and Speed are both in different ways examples of this. The Temeraire is a warship, a vessel that saw service at Trafalgar, being towed to the breaker’s yard by a small steam tug. Its day is over – it is no longer of any use. New technology masters it. Rain, Steam and Speed shows a steam train roaring towards you across a viaduct. It is the emblem of an evolving world, where things would move much faster than they ever did before. In both of these, the subject is enhanced by shifting clouds and smoke, emblematic of a world that is in a constant state of change.

As the title of the exhibition – Turner’s Modern World – makes plain, the organisers of the show want us to see Turner as a prophet of the new, very conscious of his role, and also conscious of the deficiencies of the society he lived in. They credit him with a desire to criticise, evaluate and reform. The Turner they want to present to their audience is very much a certified forerunner of the multitude of do-gooding, right-thinking artists and pundits who currently populate the upper reaches of the contemporary art world. Dear old JMW, great-grand-dad of Banksy, always busy – particularly in his latter years – in trying to put the world to rights. 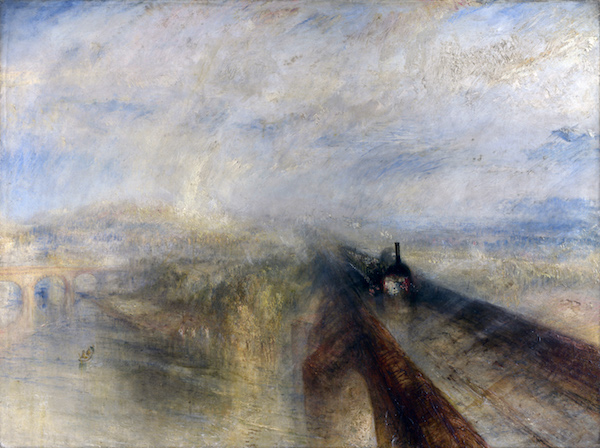 This is understandable. We are always inclined to think that the great creators of the past are essentially our own selves, suitably sanctified, busy with some version of our own preoccupations. Looking at Turner now, we do well to remember that we are living in a world of conscious virtue, of a kind that didn’t really exist in his day. His peers were the Romantic poets of the early 19th century, particularly Byron, for whom Turner had a great admiration. No-one would describe Byron as a goody-goody. If he were alive today, our ruling moralisers would do their best to hang, draw and quarter him: Autre temps, autre moeurs.

Like all the great Romantics, whatever form of artistic disciple they practised, Tuner enjoyed going to extremes. This, I think, is something that explains the number of sea-scenes, as opposed to other kinds of subject-matter, present in this show. If not the ocean, then why not a river? Or else some huge clouds, pregnant with moisture. The thing that attracted Turner, most of all, was mutability. One sees this, in his purest form, in his watercolours, especially the late ones. On occasions, these late watercolours seem, when viewed superficially, like scribbles made by Jackson Pollock. In this sense, Turner was indeed prophetic. This, though when he was at work, the idea of abstraction in art hadn’t yet been invented. Not yet, at least, in Western art. Now, ironically, our self-righteous art world is turning tail. It is starting to run away from what seems non-specific and therefore, by definition, disengaged from contemporary society. Abstraction may have run its course. Turner, rather than seeming to be of our own epoch, may even start to look out of date. Our world is starting to employ technologies radically different from, and indeed opposed to, the steam-age technology Turner sometimes embraced. 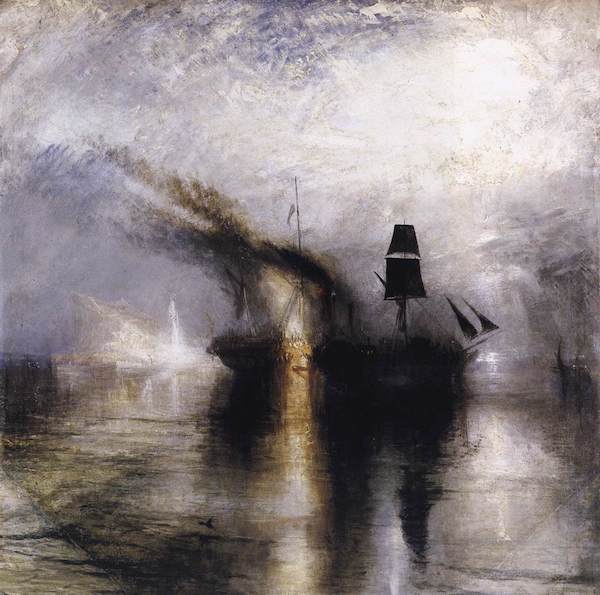 In his very late work, one does indeed get the feeling that he was, in any case, making art for one primary audience – for himself, not for us, whoever we are. Looking at these late sketches, one is guilty of the visual equivalent of eavesdropping.

Turner was not a failure in the cultural world he inhabited. He had patrons. He was famous. Yet, despite this, he was never safely installed as an official artist. His abortive visit to Edinburgh, in the entourage of George IV, offers a case in point. He could not bring himself to complete what he set out to do there. From Leonardo and Michelangelo onwards, Western art is full of things that are non-finito. Much more so than is the case in other fields of creative endeavour: in literature, for example, and music. In architecture, Gaudi’s Sagrada Familia in Barcelona is a rare example of a building still in process. Yet what’s unfinished in visual art is something that, paradoxically, often asks you in, rather than keeping you out.

For me, the magic of Turner’s art is that it so frequently keeps both mind and eye in motion. You look, you look away, you look again. Every time you look, it changes.