Unit London & their emergence as a leading gallery brand on Instagram, (355K people can’t be that wrong?) are a serious force to be reckoned with. Surprisingly very few galleries have attempted to learn from these young social wizards, despite the fact they’ve proven how effective their approach to selling art via social media can be. The second solo show of the Flemish artist Johan Van Mullem is on display in the gallery until 13 April.

Van Mullem is a seemingly quiet & gentle artist, who potters away in his back garden, creating sizeable works

Van Mullem is a seemingly quiet & gentle artist, who potters away in his back garden, creating sizeable works, billed as physical manifestations of an inward feeling. I find the work quite underwhelming. It seems to spill out on to canvas via his pen, without too much rational or reason or intended purpose. Pressed for an explanation, he elects to plead the 5th in critical terms; “I want the viewer to have their own interpretation”, which is fine as we do and will, but given he’s chosen to spend the last 15 years painting and drawing in an almost benediction devotion to his craft, I’d like to sense more what it’s all about, the wretchedness of man, love, death, sex, you name it. It can be why you create-to use your individual experience of conflict as a means of pushing a conversation further to a broader audience. 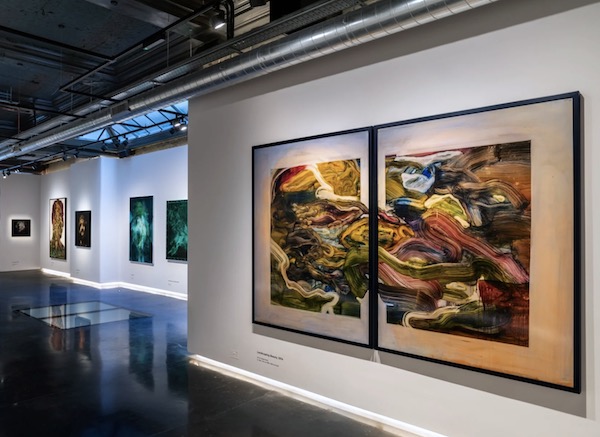 Currently, his interplay between figuration & abstract feels just that and not much more. Praise, averse appraisal aside, he’s a very competent draftsman, treating his brush/pen as a method of making circular, repeated, marks, over and over again. This technique indeed calls to mind the approach taken by Rembrandt and figure that appears in his works seemed to be touched by the same kind of reverence & perhaps uncertainty as the Dutch master.

In terms of his colour scheme, I am more favourable to Johan, especially in the works where he stretches the white out of the emerald green as if wretching deep in the ocean to extract a soul from the abyss. A broader conversation can be lost when the viewer is too fixated and in ore of the Artist’s technique and draftsmanship, however in this instance the 13ft drawing on display, is this appropriate object of this reaction and hints at a more extensive conversation the artist is attempting to have in the language he’s choosing to speak, but without giving us much of a translation as to what his dialect means.

As we enter the first floor of the Hanover square space, we get presented with a wall of screens showing Johan crafting away, the considered visuals doing their best to understand and shed light into the process behind the work. It doesn’t substitute for shortcomings in other areas but is a much needed visual introduction & a president in this space when exhibiting, which Unit has set- Let’s tell the story as best we can and take the viewer on a richer journey with more context.

So while this wasn’t my favourite offering in Unit’s history, their distinctive voice continues to vitalise the London gallery circuit in the way that no offer does in quite such an orchestrated manner.

Johan Van Mullem Reverence is on display in the gallery until 13 April. Van Mullem