The art of painting is to still time and motion. As a result, the moment at which the artist chooses to freeze time is of real significance. The moments selected by John Kirby are those that reveal dis-ease. 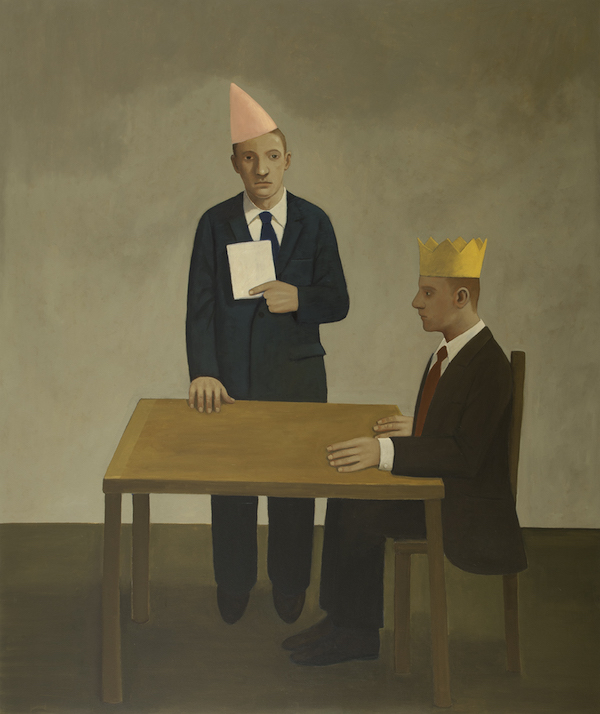 and the relationships they inhabit. Whether the forced gaiety of those wearing party hats in ‘House of Fun’ or the unnatural pose of the naked child between the legs of a father-figure in ‘Ordinary People’, we are clear that what is depicted is not fun and is not ordinary.  Kirby utilizes the static nature of painting to hint at the torment underlying the civilised facade of our culture.

Born in Liverpool in 1949, Kirby studied at Central Saint Martins and the Royal College of Art. He has indicated that his refined style has been influenced by the American realist painter Edward Hopper and the Polish-French modern artist Balthus. He has spoken of living ‘day to day with a cast of characters from my past into the present’ and this small retrospective to mark his 70th birthday brings together new and recent works alongside selected paintings from the past two decades, focusing on the conversation between past and present portrayed by that enduring cast of characters.

Kirby may be thinking of stilling time still further having hinted in an interview[i] that this is possibly the last time he’ll have a show. The title of the exhibition, All Passion Spent, could lead in that direction with Kirby intimating that he has said what he has to say in and through his work.

Much of Kirby’s work has been driven by the expression of repression through the stiff and secretive interiority and surreality of his images. This driven-ness has its roots in internal struggles relating to religion and sexuality. Kirby’s use of the line ‘All Passion Spent’ from Milton Samson Agonistes may suggest the private search of his characters for calm, as well as an increasing sense of personal peace.

One hopes that Kirby’s passion is not spent and that the showing of his work is not stilled as it would be fascinating to see the images that could result from the stilling of the storm in Kirby’s work and characters; to see what peace may look like on the stage that he has constructed.