There is something very exciting about John Piper’s early works at Tate Liverpool. The textures and layering of various materials, as in his collage ‘View from a window’, 1933, containing, gouache, fabric and silver leaf on paper. The various layer’s and textures can reflect the tactile world of painting and textiles. There is a lovely feel of contrast, depth and relief texture.

Piper created drawings during his travels from an early age near to his home in rural Surrey. He was interested in his native landscape and the architectural history.
His father wanted him to study law, and so his entry into art school was delayed. However, he later entered the Richmond school of art before enrolling at the Royal College of Art the following year. ‘This early period 1927 to 1933 was one of ‘fervent experimentation.’

As you walk into the exhibition, you will see Piper’s Construction artworks. They use a diverse range of materials. His ‘Abstract Construction’, 1934, contains oil with sand and wood on board. It is a relief sculpture using modern materials. This formed the evolving work of his coastal pictures, and many of his constructions have a nautical feel. 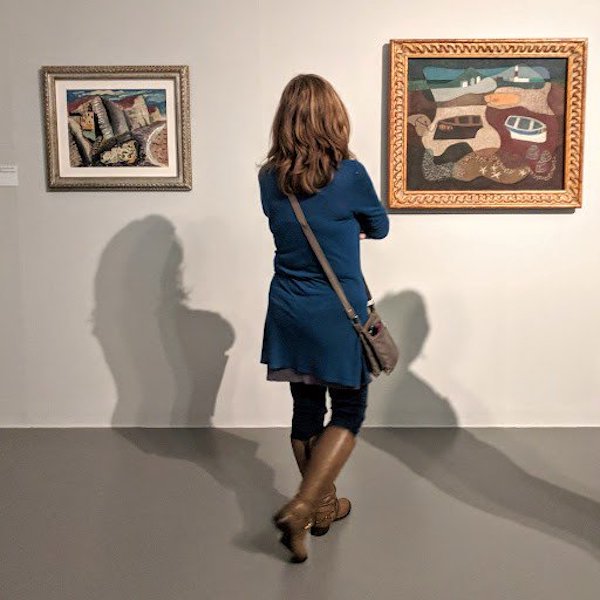 The combination of printed paper and fabric as well as using his own written material unites each piece into a ‘’’sociopolitical context of the time.’’ His work ‘beach with starfish’, 1933, gouache and ink on paper, shows the Seven Sisters cliffs near Eastbourne in East Sussex. It features collage elements from ‘The New Statesman’, for which he wrote some articles at this time. ‘Making references to Nazi economics, he encouraged a politicised interpretation of this turbulent period.’

Motivated by his growing interest in modern art, in June 1934, John Piper travelled to Paris, visiting the studios of artists such as Jean Helion, Alexander Calder and Cesar Domela whose works are also included. Including artists that were inspired by Piper and who also inspired him, the exhibition gains an interesting further dimension.

I was very drawn towards the paintings. There is a strange and familiar intimacy about them and something primaeval and haunting at the same time. The interesting contrasts of colour and tone, the balance of white against dark, the abstraction and beauty of the spacial compositions convey a huge understanding of colour and form and how this translates from reality to canvas.

Piper’s painting, ‘Abstract 1935, oil paint on canvas on plywood’ is a masterpiece, an interweaving of coloured planes. The compositions are captivating, as in ‘Composition, 1938’, oil on canvas. The texture of the linen coming through the paint is so pleasing. The subtle hues and planes of cold stark, cool and warm hot colours.

There are many books in the exhibition. Some are very rare with black and white plates depicting early sculpture. ‘Axis’, was an art journal, edited and published by John Piper’s wife and became influential for many artists and art enthusiasts at the time.

After the second world war, Piper is established in his art. He is looking to artists of the Romantic era and taking his inspiration from the arts and crafts movement of medieval art history as well as ancient times. His interest in Romanticism takes inspiration from the Sublime, and he began sketching and painting some churches and abbeys in decline to preserve their history and beauty.

Piper was later commissioned to design stained glass for Coventry Cathedral. He enjoyed the fine art crafts, particularly stained glass and stone carving. ‘Piper had a significant connection to the North West, and Liverpool in particular, designing the magnificent stained glass windows in Liverpool’s Metropolitan Cathedral.’’

Walk through the gallery. Do continue to the exhibition, ‘Surrealism in Egypt’. This is paired up with the exhibition by John Piper.

‘Surrealism in Egypt is the first comprehensive museum exhibition about the Group, Art et Liberté. This surrealistically inclined, politically engaged collective of artists and writers lived and worked in Cairo in the late 1930s until the late1940s. They had a significant impact on Surrealism.

Art et Liberté emerged out of travel, correspondence and conversation, with international artists such as André Breton or photographer Lee Miller, playing an important role in introducing surrealism to the Cairo art scene and influencing its development.’’

Throughout the entire exhibition, the artists are creating art and responding to art during times of war. Surrealism in Egypt began in Paris and Spain. Cairo at the time was the intellectual hotspot. Core concerns of the Art et Liberté. group had been to oppose the rise of fascism in Egypt and the country’s subjection to colonial rule by the British Empire.

‘Publishing their manifesto Long Live Degenerate Art in December 1938, in opposition to Hitler’s attack on modern art, the group aligned themselves with those European artists whose work had been termed ‘degenerate’ and responded to the rise of fascism.’ One member was sentenced to death for fighting against fascism.

Many women from various backgrounds did intelligence work and worked various disciplines. They were declaring solidarity for the freedom of artists. There was a focus on the human body, expressing the Impact of war and the effect it had on the group, the degree of loss of life, the idea that machinery deforms bodies.

The war drove women into prostitution. Art began to depict the suffering of women. The core concerns were social injustice and human rights. A woman is not a.muse. This is about suffering and the feminist approach of the time presented a darker picture of their suffering.

Subjective realism and Surrealism was a style that made people aware of what was happening at the time. There was a connection with French surrealism but also British surrealism. Suddenly in Egypt, all these ideas were coming together. This was something completely different and in the 1940s there is this need to express what is Egyptian by leading Egyptian modernist artists. This is a National type of art, different from the surrealists. Photography also contributed to a new Egyptian identity, photos by Lee Miller and Roman Penrose, her lover. There are letters from Lee Miller to Penrose in the exhibition.

The last section of the exhibition shows the connection between literature and art. Artists frequently illustrated each other’s books, questioning Cairo and its culture. For instance, why do we not know that Cairo was a focal point for artists and not just Paris?

The exhibitions on John Piper and Surrealism in Egypt tie in with the exhibition on the ground floor by Artist Mary Reid Kelley whose work ‘’often involves the retelling of history in voices that have been written out of it – and her new commission for Tate Liverpool continues this effort…Making her videos in collaboration with her partner, US performance artist Kelley looks at events and recasts them from the viewpoints of those who are otherwise overlooked or ignored. Women’s experience of war and revolution,’’
I enjoyed this work.

Overall, this is a fascinating exhibition depicting a range of ways in which art was expressed and responded to war.