An intimate exhibition of eighty watercolours from the Anglo-American artist John Singer Sargent (1856-1925) has opened at Dulwich Picture Gallery.

The paintings are effervescent and alive, they appear to leak out from behind the glass and illuminate the gallery’s overly dark aubergine walls. Sargent’s wet on wet technique lends itself superbly to the reflective surfaces of the streams, canals, and fountains he was so drawn to. His portraits in oil were highly regarded throughout his career but in a brave move, at the height of his fame, Sargent decided to stop accepting new commissions around 1900, he was forty-four. This gave him the freedom to exit the confines of the studio, rediscover his kinship with watercolour and embark on further inspired travels. He was also working on a gargantuan mural for the Boston Public Library during this period, his opus work. Between 1900-1918, Sargent travelled incessantly around Europe and the Middle East with his watercolours and easel to hand. He enjoyed the freedom of painting in the en plein air and the dynamism and immediacy of brush on paper.

The fluency and sensuality of his paint surfaces, and his wonderful command of light, never cease to astonish us – Richard Ormand, Co-curator

The growing influence of photography during this period is evident throughout this exhibition. Sargent appears to be peeking through a restricted lens and cropping the image even before he paints. He never places himself or the viewer at the centre of a setting or image. Instead, he plays with composition and paints enjoying an endless variety of mark making, form and pattern. Sargent hones in on river beds, architecture, figures, and boats capturing each scene with fluid dynamism. He seemingly plays with the complexities of form and light with expert ease.

This is evident in ‘Spanish Fountain, 1912.’ He has chosen to completely ignore the main statue on top of the fountain and concentrates on momentary luminescence reflected on the underside of the basin. It is the spilling of water and movement that truly captures his imagination, and which he so skilfully catches.

Sargent made countless studies of his travelling companions and those who were close to him. He also enjoyed sketching in watercolour the variety of strangers he encountered on his travels. He also documented the soldiers of World War 1. 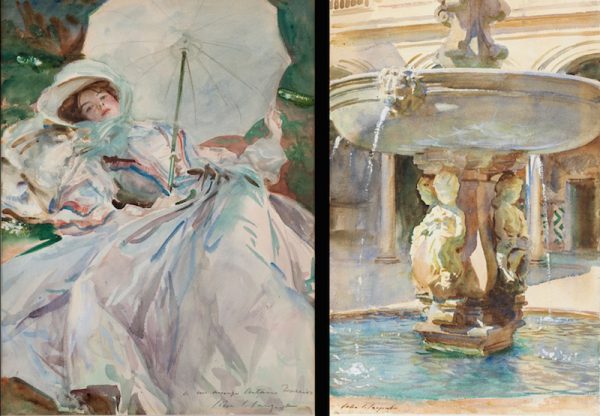 An anecdote to this and a constant favourite were his nieces whom he dressed in oriental costumes juxtaposing them across the page to bring maximum impact. Sargent’s ‘The Lady with the Umbrella, 1911.’ has never been seen in this country and depicts his niece reclining in fashionable attire under a parasol. The dress fabric wraps around her alluring form caressing her curves with demure sensuality. Again, Sargent a magician of light makes the intangible permanent.

The watercolours in this exhibition are transitory glimpses of Sargent’s world vision. If one ventures too close it feels as though they may disintegrate into abstraction. A rare treat in its entirety,  I urge you to go and see this gem of a show before it disappears for good.

“In Sargent’s watercolours we see his zest for life and his pleasure in the act of painting. The fluency and sensuality of his paint surfaces, and his wonderful command of light, never cease to astonish us. With this exhibition, we hope to demonstrate Sargent’s mastery of the medium and the scale of his achievement.” – Richard Ormand, co-curator.