At the moment the London art scene is not rich in bright young artists, elbowing their elders aside, eager to make themselves visible. In this, it offers a marked contrast to the 1990s, when the people whom we immediately labelled YBAs – Young – or Younger – British artists began to make their presence felt. There are a few of those still around, Damien Hirst for example, and Tracey Emin. Young they no longer are. Middle-age has caught up with them. 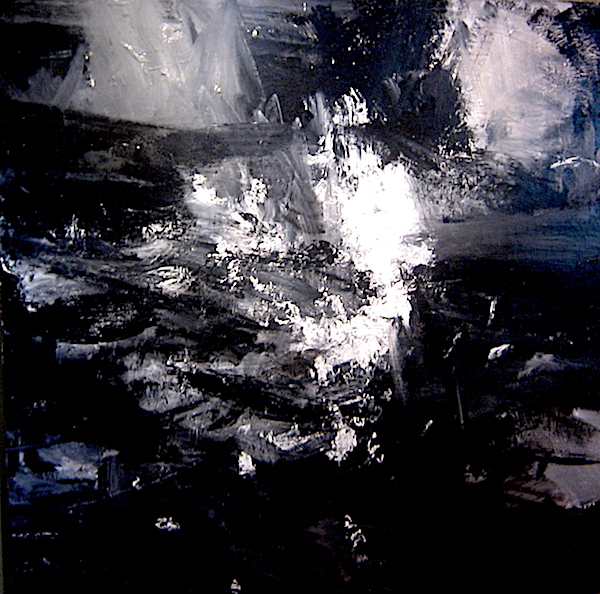 What is happening now is a re-emergence of artists from whom the art stars of the 1990s stole the spotlight. I very recently reviewed eighty-year-old John Loker here on Artlyst, praising a solo show of his now current at Flowers East. And here’s John Virtue, born in 1947, who has a display of work, not at a gallery but Fortnums prestigious emporium in Piccadilly. Fortnums have in fact been hosting art for some time, in partnership with the entrepreneur and collector Frank Cohen. Together they have formed a partnership called Fortnum X Frank.
This display is a product of their alliance.

In several ways, Virtue’s art is a good subject for this kind of thing. It’s immediately recognisable – the same kind of image over and over again. Always based on nature – woodlands and seascapes reduced almost, but not quite, to abstraction. And always in black-and-white, Late JMW Turner, one might say, rendered in monochrome. Sometimes, especially on the larger canvases, the images are multiple. Sometimes you get just one image to a canvas: a wave, one might think, breaking on a shore, or a cloud reflected in a river. It seems odd, but not unpleasurable, to encounter these vistas in a temple of commerce, where, very often, the surroundings are competitively colourful.

The paradox is, I think that the paintings work better in Fortnum’s Piccadilly storefront windows than they do inside the shop, where they are mostly confined to the staircase linking the various floors. If you insist on taking the lift, you’ll miss most of them.

There is, in addition, another paradox – one that manifests itself most clearly if you photograph those shop windows, rather than just standing there and looking at them. Because of the complex play of reflections, or should one say the play of reflections plus transparency, the big paintings, caught on camera, become immaterial ghosts of themselves.

There’s something magical about the way these carefully edited paintings become veils between you, the observer, and the urban environment within which you are placed, as you stand there and look at them. They add a little bit of magic to your day. 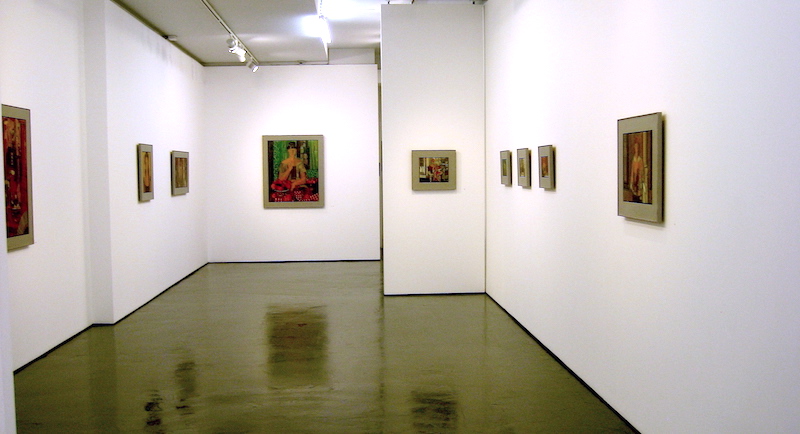 Alfredo Roldán, a Spanish artist now in his 50s, whose work is on view at the Pontone Gallery, is a wholly self-taught artist. You’d never guess this from looking at his work. These grand, hieratic images of women, gazing inscrutably out at you, seem like Byzantine Madonnas, re-imagined maybe by Matisse.

They combine the age-old classical tradition with things inherited from the first phase of the Modern Movement.

As such, they seem both retardataire and challenging. We live at a time when the very act of making a painting is being moved away from its long-established central position in Western art. Photography in all its forms, digital images, purely conceptual manifestations, performance art: all of these seem to be elbowing painting aside as they try to make places for themselves as the real norms of Post-Modernist image making.

Yet the act of making images in paint stubbornly survives. It does so for several reasons rather than just one. A reason that commentators such as myself are often shy about mentioning is that paintings, in what is still a mercantile society, retain their status as commodities, plus they are commodities of a special kind.

You can’t eat them, drink them or sleep on them (beds do a better job for you where a night’s sleep in concerned), but many people derive comfort from contemplating them. Often, perhaps selfishly, this part of the audience prefers to do so one-on-one.

Roldán’s work seems to be perfect for this kind of egotistical viewing. You contemplate the image, and in return, it directs a level gaze at you.

I mentioned Byzantine icons a couple of sentences back. This is the paradox: That the commodity can offer experience that seems to have spiritual value. What these paintings offer is something a little more than aesthetic pleasure. They ask questions, and in this sense they ‘perform’. They are, in their own way, as pro-active as performance art.