The dust-jacket of this handsome new book proclaims that ‘Judy Chicago is America’s most dynamic living artist’. That statement has been a long time coming – Judy is now in her eighties. When one reads the narrative of her life, one sees how tough a struggle she has had to reach the situation of respect she now enjoys. As a late chapter in the new book makes generously clear, I played a small part in achieving this; however, she was already long famous thanks both to her exhibitions and to her autobiography Through the Flower, my book Judy Chicago: An American Artist was the first comprehensive book-length study devoted to her art. I met her on a visit to New Mexico in 1996. Then, as Judy relates: “En route back to the airport, he shocked me by asking what I thought about the idea of him writing what would be my first major monograph.” The book was not published until the year 2000, just over two decades ago. 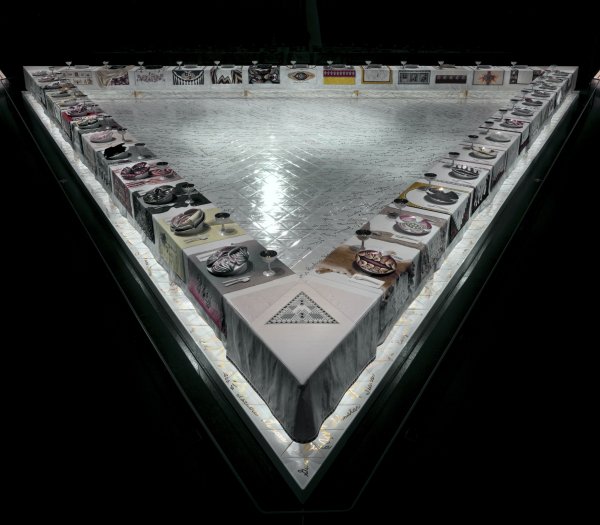 As the narrative in her own new publication makes clear, her exhibitions had by that time long been enthusiastically received by the large numbers of visitors who came to see them, particularly so after the unveiling of her magnificent installation The Dinner Party at the San Francisco Museum of Modern Art in March 1979. Though this was not by any means Judy’s debut as a leading feminist artist, the scale and ambition of the piece made it a landmark event.

Though it attracted a great deal of commentary and large numbers of enthusiastic visitors, the show was not entirely welcomed by the American contemporary art establishment of the time. Some institutions pulled out of the tour and were replaced by spaces found ad hoc, some of which needed a good bit of freshening up. Rather than diminishing its impact, this seemed to reinforce the show’s populist appeal. The Dinner Party enjoyed a long life on tour and has now, at long last, found a permanent home in the Brooklyn Museum in New York, becoming almost as much a ‘must see’ for visitors to the city as Rembrandt’s Night Watch is for tourists visiting Amsterdam.

It was not just male critics who have tended to sneer at Judy’s art. Quite a lot of female ones joined in too. It was as if what she did threatened the elitism of the contemporary art world, which simultaneously proclaimed how special it was, how far in advance of the unenlightened masses, yet at the same time insisted that the spectator must ‘do as nanny tells you’ and obediently admire what the established experts told them to like. To some professional spectators, enterprises such as The Dinner Party, The Birth Project and the Holocaust Project were deeply unwelcome for a paradoxical reason. They, the appointed experts, felt threatened because of, and in spite of, the popular enthusiasm these events aroused. They felt redundant – pushed aside.

My own relationship to this situation was, in its own way, slightly strange. I am not American. I am certainly not female. I am a male British colonial, born in the West Indies from a family which, on my father’s side, has lived in various parts of the Caribbean since at least the 1630s – Barbados, Guyana, Jamaica. Judy Chicago (born Judy Cohen) is, as her professional name suggests, originally from the Midwest. However, her professional career has been spent first in California, then, more recently, in New Mexico. When I first encountered her art, my reaction was to think how stereotypically American it was in terms of the attitudes it expressed. She had, in her early career, passed through a Minimalist phase – a phase of art-making where neither gender nor race supposedly made any difference. From this, she moved to almost the opposite pole, where gender and Jewish descent become defining factors in what she chooses to make.

If she could communicate these things so efficiently to me, it seemed pretty certain that she could do this to a wide variety of other people, with backgrounds very different to her own. You don’t have to be American to be an obedient fan of Judy Chicago.

The Flowering: The Autobiography of Judy Chicago, Thames & Hudson