Julian Schnabel currently occupies an ambiguous position in the art world, which his new solo exhibition at Pace is likely to do little to clarify.

He is undoubtedly famous – but famous for what?

Schnabel was born in Brooklyn in 1951 but made his first impact on the American art world while still a student, working for a B.F.A. degree at the University of Houston. When I made a visit to Houston in 1980, the local art world was still reverberating with tales of his ambition and self-confident grandiosity. By that time, he had already left again for the brighter lights of his native New York. He made a major breakthrough with a solo show in 1979 at the Mary Boone Gallery, where everything was sold in advance. The next year he participated in the Venice Biennale, side by side with German Neo-Expressionist grandees Anselm Kiefer and George Baselitz. In 1981 he was the youngest artist included in the Royal Academy’s epoch-defining survey show A New Spirit in Painting, one of six Americans included. This was interesting in more than one way: the big show at the R.A. seemed to mark a return to traditional forms of expression, and to figurative art in particular, as opposed to the upsurge of Minimal and Conceptualist modes.

That year I happened to be once more in the United States, and I paid a visit to the Long Island estate of Alfonso Ossorio, a wealthy Filipino gay man who was both a major collector and also a well-known artist linked to, but not quite firmly part of, the Abstract Expressionist movement. Ossorio made a particular speciality of assemblages inspired by the work of Jean Dubuffet – shells, bones, driftwood, nails, dolls’ eyes, cabinet knobs, dice, costume jewellery etc. attached to a panel surface.

Shortly before my own visit, Schnabel had made a kind of state visit to Ossorio, which left the latter purring with feline delight. At that time Schnabel was known most of all for his so-called ‘plate paintings’, where fragments of crockery were attached to the whole of the surfaces on which the paintings were made. He seemed to feel that this gave him a definite affinity with Ossorio’s own method of production. “So I asked him,” Ossorio told me, “what method he used to stick to the plates down. And when he told me how he did it – I thought to myself ‘well, it’s all going to fall off.’”

Indeed, when I went back to the city, I began to hear rumours of technical problems with Schnabel’s paintings – of restorers’ studios cluttered with deciduous Schnabels.

Looking back, this now seems like a metaphor for what has happened to Schnabel’s once mighty reputation as an artist, though he has compensated by making a substantial reputation as a film-maker. One can make an ironic comparison with the fate that has befallen the work of a New York artist from the next generation down, Jean Michel Basquiat (1960-1988). Basquiat died untimely of a drug overdose, after an extremely brief career which coincided almost exactly with Schnabel’s moment of glory. As a film-maker, Schnabel then made a major contribution to the rise of Basquiat’s posthumous reputation with a biopic released in 1996. Now Basquiat’s work at auction sells in major millions of dollars. I wonder, however, if Pace will be able to find a market for Schnabel’s current work that is in any way comparable? The show seems like an attempt to revive a reputation – a reputation as an artist, rather than a more stable one for other things, such is film-making – which is now in terminal decline. 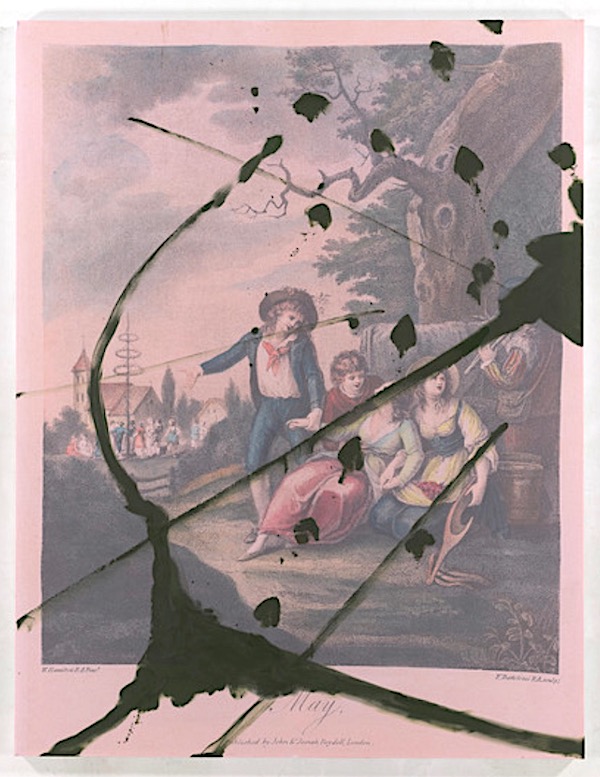 The show at Pace advertises itself as the first held in London for a long time. This is not quite true. There was a major show at the Dairy Centre in Wakefield Street in 2014. Time Out reviewed it kindly, saying “[Schnabel’s] monumental self-belief is leavened by glimpses of self-awareness and humour. Imagining how these new works will wind up his po-faced detractors only adds to the fun.”

It consists, we are told, of “12 new paintings that originate from 18th-century calendar prints discovered by the artist in a second-hand store in New York City. The gallery enlarged the original calendar prints’ pastoral scenes. Schnabel paints on them, establishing a new picture without losing the first and emphasising the constant multiplicity of vision.”

The ‘painting’ bit consists of some suitably large-scale black scribbles on a fading-away coloured surface which is – yes – a faithful enlargement of the original print. In other words, this is appropriation art at its dreariest. Forgive me while I yawn.