Upon entering the Brooklyn Museum to view “KAWS: What Party”, the visitor is confronted by a colossal and strikingly iconic sculpture titled “Along the Way” (2013). Impeccably fabricated in wood, the two figures paired here are derived from KAWS’ character Companion, the artist’s first, limited-edition vinyl figurine that was produced in 1999 by the Japanese street wear and cult toy company Bounty Hunter. While KAWS, the alias of Brooklyn-based artist Brian Donnelly, has essentially retained the shorts, large shoes and gloves of the anthropomorphic cartoon character Micky Mouse in the lobby of the museum, the transmutation of the head, abstracted face, modified duplication of the pop icon, sophisticated materiality, refractive surface and visceral connotations cunningly encapsulate elements from diverse art movements, including pop art and appropriation.

While the toys of KAWS began attracting a broad public audience two decades ago, his paintings and sculptures have now become highly valued within the art world. With the sale of his 2005 acrylic-on-canvas painting “The KAWS Album” for a whopping $14.8 million in 2018 at Sotheby’s in Hong Kong, astronomically surpassing its high estimate of $1 million, KAWS has undoubtedly established his niche within the art world. This is evidenced by half-a-dozen solo exhibitions at museums over the past decade, culminating with the first comprehensive retrospective of the artist’s career at the Brooklyn Museum. 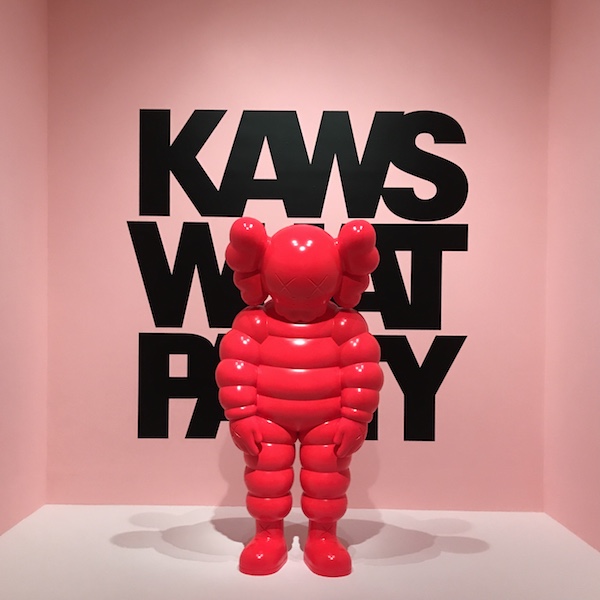 Having conflated the psychological aspects of companionship and estrangement through hybridised and mass-cultural iconography, the X-eyes, X-ed hands and a calculated grammar of high art consistently recur within this mid-career survey of the artist. Regarding the content of KAWS’ enterprise, curator Eugenie Tsai has noted: “While participating in a cultural environment shaped by image and consumption, KAWS simultaneously emphasises the constant presence of universal emotions in his work, such as love, friendship, loneliness, and alienation—an emphasis that is now more important and relevant than ever before”.[1]

This well-conceived exhibition is divided into five sections that effectively survey Donnelly’s experimental, artistic and commercial trajectories since the early nineties. While the first section presents notebooks, graffiti drawings and illegally altered advertisements of phone booths and bus shelters, the second section reveals the artist’s well-established pictorial vocabulary that incorporates such hybridised cartoon characters as the Kimpsons and Kawsbob. The mainstream pictorial themes here are derived from the Simpsons, Smurfs, Snoopy and SpongeBob SquarePants, among others. These paintings fluently investigate the thresholds of representation and abstraction, a visual method that continues within the practice of KAWS. Although the sculptures here are primarily based upon pop cultural iconography, they remain in rich dialogue with modernist and contemporary aesthetic trends. The recently executed paintings within the third section of the exhibition touch upon such social issues of our time as isolation, anxiety, grief and sadness, as stated in the press release of the exhibition. Selections from the mass-produced designs and products of KAWS are displayed in the fourth section of the exhibition, where skateboard decks, toys, sneakers and furniture attempt to bridge the gap between the categories of “low” and “high” art. The exhibition culminates within a space where cinematic short films of the artist’s numerous Holiday projects are brought together with four large-scale and four medium-scale versions of the Companion figure.

As we wander from gallery to gallery on the fifth floor of the museum in order to witness the pathway that has culminated in the meteoric rise of the twenty-five-year career of KAWS, his output demonstrates a compelling vision to expunge the divisions of such art-historical taxonomies as “appropriation”, “originality”, and “kitsch”. With the binarisms of friendship/alienation and high art/low art that prevail the exhibition, there is an overall sense of infectious humor through which Donnelly has succeeded in appealing to the aesthetic desires of both mainstream culture and the highest echelons of the art world. Throughout the show, there is also a spirit of experimentation that is as open-ended as the fully capitalized pseudonym KAWS—allegedly chosen because of the graphic characteristics of its letters. Yet the most captivating dimension of this survey is the art-historically informed and discursive nuances so many of the works convey. 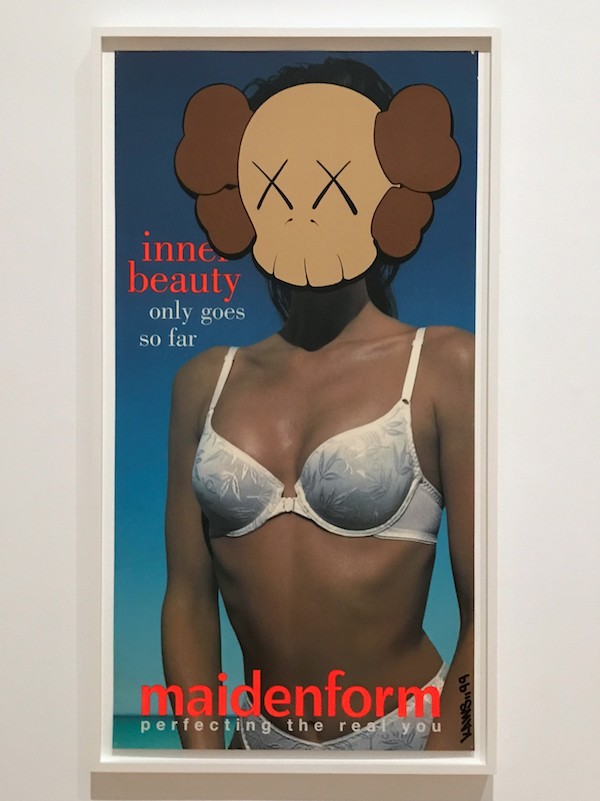 “Untitled (Maidenform)” (1999), consisting of acrylic on a ready-made advertising poster, is somewhat inseparable from the appropriated collages of Sherrie Levine, such as “President Collage: 1” (1979) of the Museum of Modern Art, New York. As Levine had attempted to challenge the concepts of authorship and originality by recontextualizing mass-produced images, KAWS has followed somewhat of the same track of appropriation, though his trademark rendition of the abstracted Mickey-Mouse head with X-ed eyes reformulates the pirated photograph’s references: from postmodern appropriation to pop art to modernist flatness to hints of abstraction. These cultural currents have become coded upon the advertising posters of KAWS. We are here reminded of the exhibition “Image World: Art and Media Culture”, held at the Whitney between 1989 and 1990. “A Forest of Signs: Art in the Crisis of Representation”, held at the Museum of Contemporary Art in Los Angeles in 1989, also comes to mind, as the exhibition attempted to address “the meaning of art in a media- and consumer-influenced era”.[2] Two paintings by Levine in that exhibition, both dated 1988, were “Untitled (Krazy Kat: 2)” and “Untitled (Ignatz: 1)”. These collages and paintings of Levine come across as paradigms of postmodernism’s pluralist tenets that have clearly formulated the high-art practice of KAWS, no matter how mass-produced and populist his output has also been: from the 41-foot-tall balloon “Companion” of the Macy’s Thanksgiving Parade (2012) to the 115-foot-long “Companion” floating horizontally upon Hong Kong’s Victoria Harbour (2019) to collaborations with Estudio Campana, Uniqlo, Dior, Nike, Comme des Garçons, Pharrell Williams and Kanye West. “I just want to make something good and not worry about how it’s labeled”, KAWS has stated.[3] 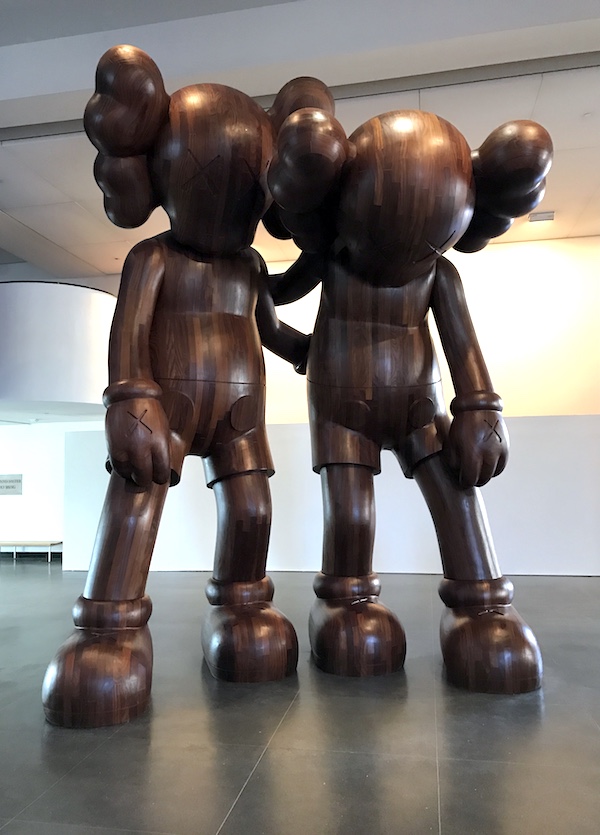 KAWS, “Along the Way”, 2013. Courtesy of the artist and Brooklyn Museum, New York.

That “something good” can easily be translated as “something in dialogue with both high and low art”, as it is exemplified by “Companion (OriginalFake)”, dated 2011. Here KAWS has rendered the semi-abstracted, comical sculpture of his humanoid mouse as a partial anatomical model of the human torso, with its left eye staring vacantly at the viewer, as if to render its X-out right eye symbolic of the twinkling of the eye—symbolic of the temporality of visual perception. The dichotomy of the absence of vision marked by X and its seeming presence marked by the bare ocular globe uncannily portrays a distinction between the doctrine of high modernist abstraction that had taken its course by aiming at purifying painting through the inseparability of the its visual surface and material support—its total detachment from forms of representation that had occupied Western painting since the Renaissance. Though hypnotic and voiceless, ghastly and cartoon-like, “Companion (OriginalFake)” recalls Jacques Derrida’s discussion of Edmund Husserl’s phenomenological conceptualization of our visual experience of the world through temporality in the essay “Signs and the Blink of the Eye”.[4] As Husserl had theorized the “present moment” (now) to be preceded by retention (memory) and followed by protention (anticipation), Derrida reformulates Husserl’s theory of the present moment through the “blink of an eye”, its Augenblick. The XXs for symbolic eyes have been circulating in mass culture since the early nineties as a part of KAWS’ logo of the highly stylized skull and crossbones. In his anatomical Companions, the pairing of the symbol and icon for eye evokes the spectator’s reflection upon the modernist logic of visuality and the inseparability of vision from corporeality. As vision is conditioned by the eye’s rhythmic grasp of the external world and its very obliteration due to the Augenblick, the semi-representational and semi-abstract face of the sculpture here ingeniously reveals the corporeal condition of visual perception. Through sly exchanges between surface (painting) and mass (sculpture), between exteriority and interiority, between the optical and visceral, “Companion (OriginalFake)” conveys a sense of the mechanism of the eyeblink, now embedded within pop-cultural and consumerist iconography. 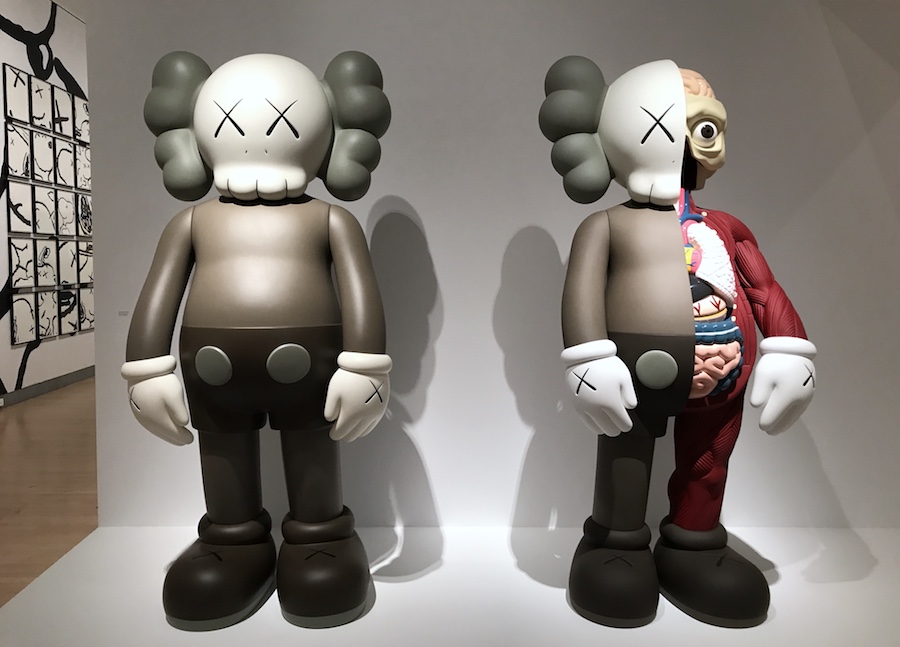 Neon-like, subdued and vibrant colors operate within “Urge” (2020), an impressive acrylic-on-canvas suite that consists of ten paintings arranged up-close, in two rows of five. KAWS’ partly-abstracted motif of the face with its XX eyes is coupled with hands on each panel, conveying a sense of mortal danger and frenetic anxiety, but perhaps hope as well, all savvily packaged through the artist’s lexicon.

What gives this and other paintings of KAWS an edge that is as distinct as that of Peter Halley for instance, who uses florescent acrylic and Roll-a-Tex on his canvases, is the custom-ordered pigments from Golden Artist Colors, a manufacturing company based in New York. Regarding “Urge”, the museum’s director Anne Pasternak has aptly commented, “KAWS’ new works speak powerfully to the isolation, fears, and grief of our times”. This series reminds “us that there is a universality to our suffering”.[5]

While each painting of “Urge” carries a certain interplay between figure and ground, selected outlines bear a sense of shading, bringing flatness to its transition toward a restrained sense of volume and depth. “Urge” conjures up intelligent dialogues through such pairs of binarisms as singularity/seriality, originality/duplication, flatness/volume, surface/space, avant-garde/kitsch, innovation/appropriation, figuration/abstraction—concepts and forms that have been in the center of modernist (and postmodern) painting throughout the twentieth century. As for Donnelly’s attention to pure formalism, the artist has stated, “If you look at something but then you know what it is, is it still abstraction? You just start looking at the gestures and how they work and thinking about the history of painting and how it can relate to that”.[6] Though painterly gesture is purely absent from Donnelly’s highly linear paintings, his comment on abstraction fittingly sums up a keenly-formulated artistic project that spans over the past quarter of a century. 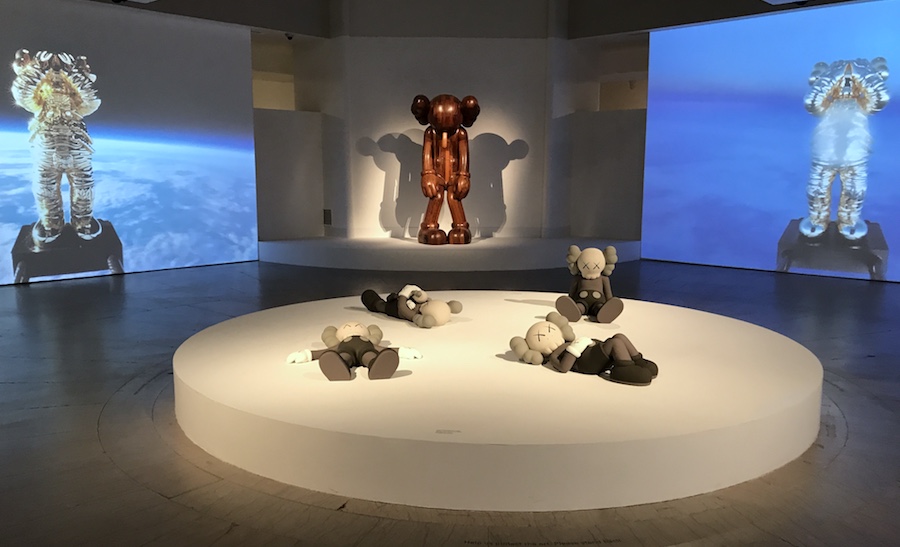 The paintings and sculptures of KAWS present reinventions within the visual arts that have in one way or another been also addressed by such artists as Andy Warhol, Damien Hirst, Takashi Murakami and Jeff Koons. However, by having appropriated mainstream culture and built 3.3 million Instagram followers, Kaws has hazed the distinctions of “high” and “low” art to an unprecedented extent, as evidenced by the diversity of visitors who arrive to view his work and purchase one of his highly sought products at the Brooklyn Museum.

“KAWS: What Party” on view at the Brooklyn Museum, New York, Morris A. and Meyer Schapiro Wing and Iris and B. Gerald Cantor Gallery, 5th Floor, 26 February through 5 September 2021.