Artlyst has attended Modern Art Oxford, for the opening of ‘Kazem Hakimi: Portraits from a Chip Shop’, a fascinating and very personal exploration of a local community. Hakimi has in fact been a photographer for 30 years, with the artist’s latest body of work focusing on a community portrait of Oxford.

This breakthrough exhibition in the Gallery’s project space is made up of fifty photographs across two locations, which have been curated from many hundreds of images of individuals from the artist’s OX4 oeuvre. With each image having been  taken in a very particular studio setting; that of Hakimi’s fish and chip shop on the Iffley Road in Oxford (OX4 is in fact the shop’s postcode). Blurring the definitions of business and artistic practice; this is the perfect environment to capture individuals via impromptu documentary, or street photography styles.

This collaboration between the Gallery and the Old Fire Station in Oxford, presents the viewer with an opportunity to see the artist’s subjects in a fresh light. Hakimi’s informal approach (and his obvious warmth) lends his subjects and final works an openness and dignity expressed via a relaxed – yet highly assured – photographic style.

The photographer makes it look all too easy. But the works show a genuine skill – with portraits that actually capture trust – and the mutual respect between subject and photographer. A connection that perfectly reflects the artist’s exploration of community. 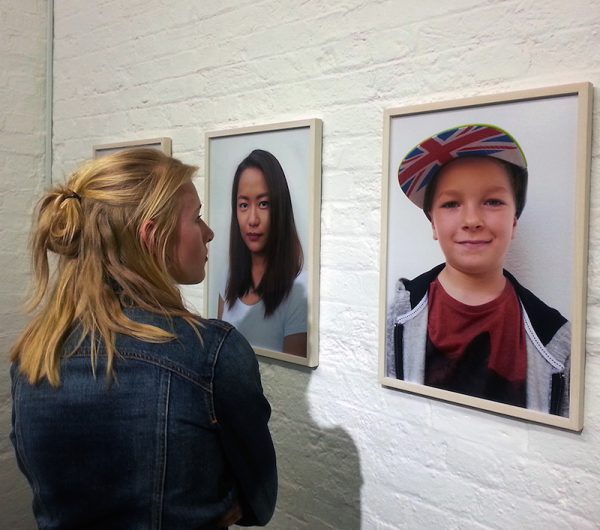 In fact the artist’s shop becomes the psychological backdrop and meeting point for that community, a neutral environment creating a coherence. As Hakimi has stated: the work is an exploration of a very different Oxford to that of the dreaming spires or detective novels – this is the reflection of a real community – through the skilled eyes of a member of that very community. This is the real Oxford, the ‘eccentric Oxford’ full of the colourful characters that many of us meet on a daily basis; this is Hakimi’s ‘family album’.

For many artists this project could have resulted in exploitation or spectacle, but via Hakimi’s talent, through this oeuvre of work we instead have a celebration of character and individual dignity, all made possible by the artist’s own spirit of inclusion. This is a powerful and heartfelt exploration of a city that the artist obviously loves.

Born in Shiraz, Iran in 1960, Hakimi moved to Oxford in the 1980s and studied Civil Engineering at Oxford Polytechnic, where he spent most of his time in the photography department, mastering his art over the last 30 years. Hakimi has exhibited in solo and group exhibitions at The North Wall Arts Centre, OVADA, Art Jericho, The Jam Factory and Modern Art Oxford. In 2008, the artist’s work was published in the book An Eye for Iran: The Photographs of Kazem Hakimi.