Pace London is currently presenting White Black Gold, an exhibition of new works by London-based artist Keith Coventry. The artist has been exploring the relationship between Modernism and its manifestations in the contemporary via two new bodies of work; Coventry questions Modernism’s ‘utopian promise’, deconstructing its power via juxtapositions with post-modern contexts.

With more-than-telling titles such as the artist’s ‘Pure Junk series’, Coventry explores the Modernist cliché of white monochromatic paintings, juxtaposing them with disposable commercial culture. The works sloping forms are derived from the contours of McDonald’s ‘golden arches’ logo. Created with traditional materials, the work hovers between painting and sculpture; the evocation of Modernist purity is subverted by the notion of the shallow aesthetic of consumerism, junk food, and disposable, low-value culture. The juxtaposition with opposing values continues with the artist’s second group of new Junk works, a series of small bronze and gold sculptural pieces, which at first convey the established qualities of the Modernist aesthetic – again with works in relief – employing both the languages of painting and sculpture. Yet the geometry of each curve has again been transposed directly from McDonald’s golden arches; a juxtaposition concerning value and forming a dialectic between Modernist and consumerist aesthetics, at once a defamation of Modernist value and an ‘ennobling’ of the hollow consumerist aesthetic, forming a subversion of aesthetic hierarchies.

The final work is the artist’s ‘Destroyed Shop Window’ (2016). The large-scale piece is a cast bronze work modelled after a ‘bombed-out storefront’. Coventry evokes the Modernist grid, then recontextualises it; the artist replaces the abstract, mathematical aesthetic with narrative language, suggesting the transience of consumerist culture – the shop has burnt to the ground, the fast food joint has gone up in flames – the result of a great Modernist chip pan fire. 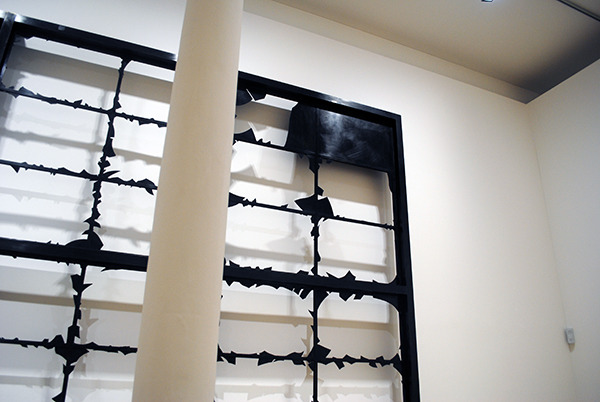 Coventry subverts language, turning the Modernist aesthetic into a wry joke. But the works in ‘White Black Gold’ are also a serious exploration of the viewer’s ability to judge aesthetic value in the context of sociocultural history; employing a subtlety directly antithetical to the Chapman brother’s hilarious Ronald McDonald grotesquery.

Keith Coventry (b. 1958, Burnley, United Kingdom) attended Brighton Polytechnic and received his master’s degree from the Chelsea School of Art in 1982. In 1988, he co-founded the exhibition space City Racing, which operated in London for a decade; in 2001, City Racing was the subject of an exhibition at the Institute of Contemporary Art, London. Solo exhibitions of Coventry’s work have included Lieu d’art Contemporain, Narbonne, France (2014); Modern Collections, London (2013); The Bowes Museum, Barnard Castle, County Durham (2012); PEER, London (2012); Museum of London (2010). Coventry lives and works in London.