Violence is to be found everywhere and at all times, even where people pretend that it does not exist. That is the argument made by Jacques Ellul, French philosopher, sociologist, lay theologian, professor, and noted Christian anarchist. Ellul argues that we must understand violence clearly if we are to know what we are doing when we damn it. Societies, like ours, that call themselves civilized have only camouflaged violence by explaining and justifying it and putting a good face on it. Economic relations and class relations are nothing more than examples of the masked violence that is found at all levels of society.

In these striking works, Currie further extends the rich and varied reach of a Scottish Realism – JE

Ken Currie was the most overtly political of the New Glasgow Boys, students of Sandy Moffatt, who emerged from the Glasgow School of Art in the 1980s. While a student Currie discovered the socially committed realist painting of Otto Dix, George Grosz, and Diego Rivera and utilised this style in paintings, including the Glasgow History Mural on the ceiling of the People’s Palace. which depict scenes of working-class struggle and protest, defeat and victory. As he has explained, ‘It was the first years of Margaret Thatcher’s government … A lot of people lost their jobs and … this was something that had to be militantly fought.’ 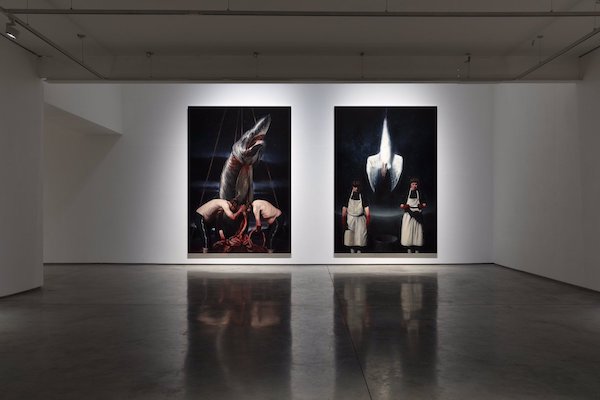 Currie began his career by documenting the masked violence of economic and class relations but increasingly came to view violence as a sickness infecting society as a whole. His works explore the extent to which violence pervades society and reveal the extent to which we live, as Ellul suggests, ‘with a constant fear that violence will rear its ugly head and disrupt the peace we have managed to achieve.’

Images such as ‘Large Examination’, ‘Gown’ and ‘The Executioner’ inhabit the boundary between healthcare and torture in such a way that we are unsure on which side of the line they sit. The techniques of one can easily inform the other. ‘Bird People (after JM)’, ‘Basking Shark’ and ‘Black Backed Gull’ depict the violence towards other creatures that have for centuries enabled human survival within a natural world which is red in tooth and claw. ‘Down in the woods’ is a literal depiction of Ellul’s belief that we live in constant fear that violence will rear its ugly head and disrupt our peace. On either side of the central Kafkaesque image of a monstrous stag beetle attacked a defenseless man are further examples of the masked nature of violence within our society with scenes of hidden flagellation and beatings.
‘Red Ground’ is a figure whose face and torso are covered by a sheet of slogans. ‘Blind Red’ is a similarly covered figure with a wholly red sheet. ‘Study (Orestes)’ and ‘Study (Clytemnestra)’ are naked figures hidden by white sheets. Clytemnestra and Orestes are characters without the insight to break free of cycles of violence and who thereby perpetuate them. Currie’s sheet-covered figures are all of us who do not see and therefore continue the masked violence that is found at all levels of society.

Currie is constantly astonished at people who come in and look at the work and say, ‘I can’t look at that – that’s horrifying, that’s horrendous’, but who will then go and watch a crime drama that night, ‘and there are people being – having their heads chopped off and strangled, and they’ll sit and watch that with a cup of tea.’ In Currie’s work art retains its ability to shock by means of the realism with which Currie unmasks our propensity to violence whilst rigorously eschewing its potential to entertain.

Currie has left the nightmare scenes of unruly crowds to Peter Howson, his fellow New Glasgow Boy, while increasingly focusing his own vision on staged small groups or sole figures chillingly combining chaos and calm. Occasionally, as in ‘Down in the woods’, he embraces the surreality that was the raison d’etre of Steven Campbell. His focus on small groups and individuals has also meant a greater space in his work for the rural Scottish experience over that of the urban. Rooting his practice firmly in the expressive Scottish figurative imagery that was the stock in trade of John Bellany (Moffatt’s friend and fellow Scottish Realist), Currie creates powerfully emotive equivalents in ‘Basking Shark’ and ‘Black Backed Gull’ to the gutted fish displayed in the manner of the Crucifixion as depicted in Bellany’s ‘Allegory’ and in ‘Bird People (after JM)’ to the fisherfolk who feature in ‘Kinlochbervie’ or ‘Bethel’.

In these striking works, Currie further extends the rich and varied reach of a Scottish Realism which ruthlessly and relentlessly removes the many and varied masks we fashion for the violence which pervades our civilisation. Like Ellul, he does so in order to understand the laws of violence, as we need to know what we are doing when we damn violence.