The R.A.’s show of drawings by Gustav Klimt and Egon Schiele, almost all of them loaned by the Albertina Museum in Vienna, arrives at a crucial moment in the long history of visual art. Drawing, for long the simplest and most direct way of creating an image, is increasingly under challenge from other ways of doing the same thing, digital in particular.

One sees Modernity marching towards one – ELS

At the same time, paradoxically, the show seems to celebrate the emergence what we recognise a quintessentially contemporary ways of looking at and representing the human body – in this instance, the naked human body in particular,

Though the exhibition has two heroes, it also seems to mark the victory of one of these over the other. Schiele, with a much briefer life-span, and possessor of much less renown in his own time, emerges triumphant over his once more celebrated contemporary. By unhappy coincidence, both artists died during the same year – Klimt in February 1918 of a stroke, followed by pneumonia; Schiele on 31st October 1918, in the worldwide influenza epidemic. Neither was directly a victim of the World War then reaching its conclusion, but their joint departure at this time seems somehow symbolic of the coming transition from one cultural climate to another. Neither of them belonged to what happened to art in the German-speaking world during the Weimar epoch. Both, but Schiele in particular, seem to foreshadow what was to happen after their demise. 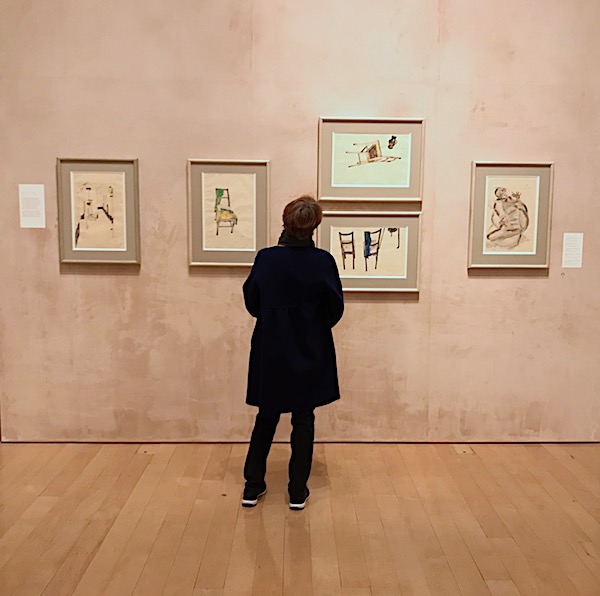 The R.A.’s show of drawings by Gustav Klimt and Egon Schiele

By its especially intimate nature, drawings rather than paintings, with a large preponderance of nudes, the show at the R.A. invites the spectator to experience this moment of change.

In order to do so fully, it is worth looking in addition to some of the works now on view at another major gallery in London – the current Burne-Jones exhibition at Tate Modern. This contains a small section devoted to portraits. Burne-Jones was never renowned as a society portraitist, in the way that Klimt was at the height of his career, but there are some similarities. Within their respective societies, the two artists occupied the same sort of milieu – moneyed, refined, sure of its place, hostile towards and contemptuous of vulgar outsiders.

When one looks at Burne-Jones’ quite numerous drawings of female nudes, it is also possible to see certain similarities with those of similar subjects made by Klimt. Both artists, in terms both of the portraits (whom they portrayed and how they portrayed them) and of their drawings of the female nude, present a consciously rarefied world. It is this world that Schiele, originally much in debt to Klimt artistically, sets out to shatter. It is worth recalling, in this context, that Burne-Jones was the best-known British artist of his time, in terms of European renown. The neatly spaced sequence of birthdates is interesting: Burne-Jones, b. 1833; Klimt, b.1862; Schiele, b. 1890. One sees Modernity marching towards one.

Basically, what this fascinating exhibition celebrates is a process of disruption, social as well as artistic. Some of Schiele’s drawings still have the power to shock – considerably faded maybe, but still remotely present. That’s what differentiates them from similar drawings by Klimt.

Artists of our own time have pretty well lost that power, though some of them clearly have rather desperate ambitions to get it back. It’s not just the means by which art is made that has changed. It’s what it can show in public as well.