Born in 1986 to an English mother and a Ugandan father, Lakwena Maciver studied graphic design at the London College of Communications, graduating in 2009. She had her first exhibition in London that same year. London continues to be her home city, yet her aesthetic also draws upon formative years in Addis Ababa and Nairobi as she creates bold messages of hope in urban settings. She has become known for works in the public realm internationally; polychromatic murals found on walls from Vienna to Las Vegas, London to Los Angeles, Miami to New York, Arkansas to Borås, Sweden.

Yet, her most recent body of work, exhibited for the first time at Hastings Contemporary, brings it all back home by focusing on the interplay between her practices as both artist and mother of two young sons. Responding to feminist author bell hooks’ essay Homeplace (a site of resistance), and in the tradition of African women across the diaspora, Lakwena has painted the walls of her home to create a space of affirmation, empowerment and resistance upon which sit her panel paintings. 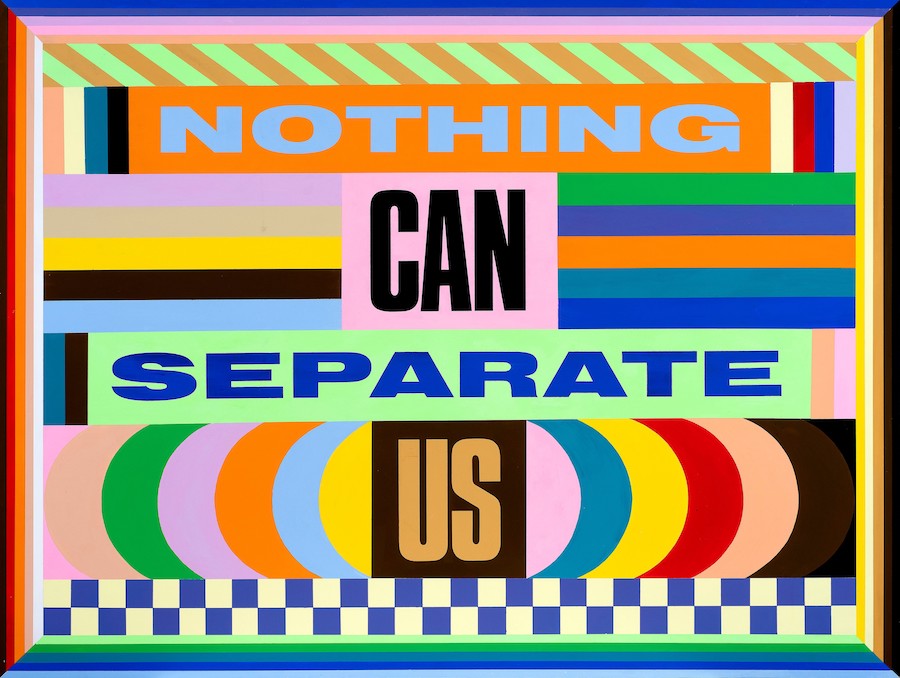 Lakwena Maciver Nothing Can Separate Us, 2020, ©The Artist

Her kaleidoscopic work includes iconic immersive panel paintings plus acid-bright rhythmic murals and installations. She borrows from the techniques and conventions of traditional sign-writing and contemporary graphic design to challenge both the external and the internalised voice of mass media. As a form of expression within a political world, her paintings decolonise by subverting myths found in contemporary popular culture. She instinctively uses decoration as a means of communication and explores the use of adornment in worship.

Central to her practice are words, used as both images and anchors of meaning. Her artistic practice involves distilling ideas and encapsulating them in a single evocative phrase surrounded by kaleidoscopic patterns and bold colours. Her phrases are painted prayers and meditations; her adornments are signifiers assigning value and glory, her content is future-oriented, looking for a future that is higher, deeper, fuller, sweeter, older, newer, bolder, brighter and more glorious.

Jonathan Evens: I want to start at the beginning of your creative process because you’ve said that when you’re creative, it begins with prayer, music, meditation, writing, and then you paint from that place. What is it about those things that stimulate your creativity?

Lakwena Maciver: I would say most of my work is very much about wanting to speak. Words are an essential part of that. I don’t always know what I want to say, and praying, writing, listening to music, it’s when I do those things that I start to work out what I want to say, the ideas flow. 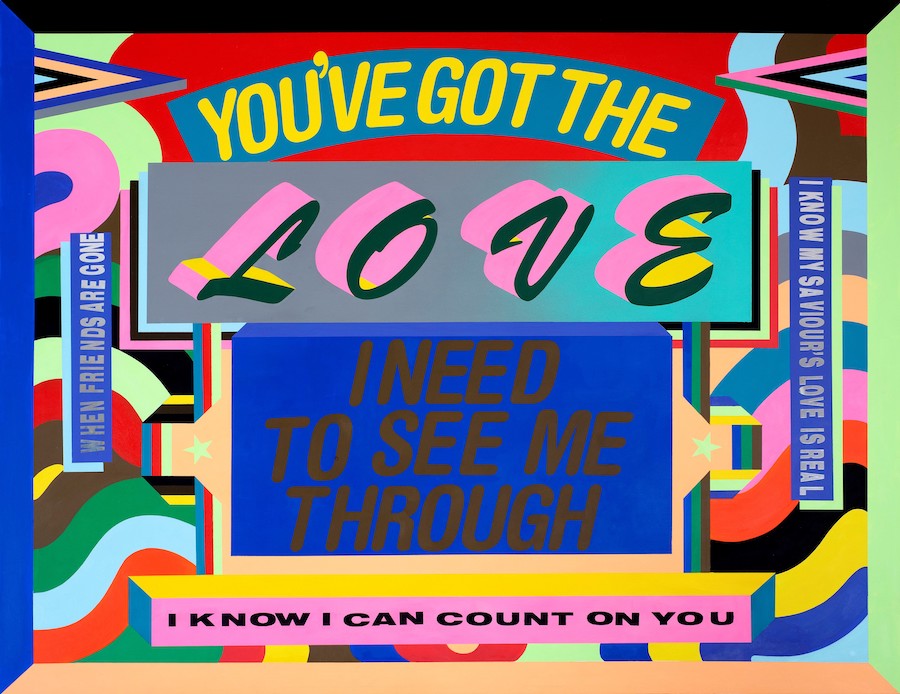 Lakwena Maciver You’ve Got the Love, 2020 ©The Artist

Jonathan Evens: Your work has been described as painted prayers and meditations, so is there a sense that your whole process –input and output – is immersed in prayer?

Lakwena Maciver: Yes, it is, to be honest. Sometimes I get lost in the middle and it just becomes about getting the work done, but it always begins from that place and ends in that place.

Jonathan Evens: Are there synergies or difference between the prayers that begin a work and the prayer that the work becomes?

Lakwena Maciver: The whole thing is connected. I’ll pray about and meditate on an idea; then I’ll work out how to make it come to life, and throughout I’m praying that the work will bless people. I don’t really dissect it in that way.

Jonathan Evens: These are aspects of your work about which you have always been open in ways that have not been typical of many artists because spirituality, while often a significant source of inspiration, hasn’t always been fashionable or acceptable with critics or curators. What has enabled your openness? 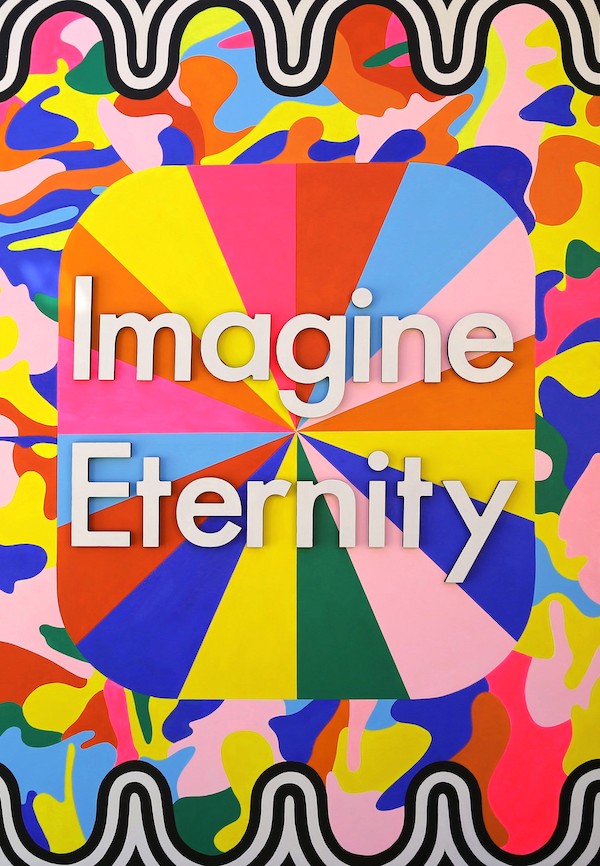 Lakwena Maciver: I’m just telling the truth about the work. I’m not entirely sure how it’s received by people, but it is what it is. Also, I’ve been open about it but not always overly explicit about it, as I think people can go as deep as they want to or just remain at a surface level. I think what’s helpful is that my work can be received on both levels.

I think there are a lot of people who aren’t aware of the more profound significance of what I’m trying to say, but I’m actually ok with that. It makes it even more rewarding when someone looks a little deeper and gets it.

Jonathan Evens: The curator Zoé Whitley created a recent exhibition for Frieze exploring spirituality inspired by the belief of Noah Davis that spirituality is a driving force behind painting and, as a consequence, makes the medium different from any other art form. Do you feel that spirituality has been or has become an inspirational force in painting or art more generally?

Lakwena Maciver: I think the idea that you have a canvas and apply paint to it to make some kind of picture for whatever reason is quite a strange thing to do. So, I kind of think that anyone who’s doing that has some kind of soulful motivation even if they’re trying to make a statement about not having a soulful motivation. Otherwise, why bother – who cares? Just eat good food, have fun and live. Don’t waste time making paintings.

Jonathan Evens: The idea of heaven is a crucial theme within your work; a theme inspired by Jerram Barrs’ book ‘Echoes of Eden’, which talks about ways in which the idea of paradise pops up in a lot of cultures. These echoes of Eden — memories of the world as beautiful and good and glorious – resound throughout history in art and stories. To what extent is that what you are looking for and responding to when you re-appropriate elements of popular culture in your work?

Lakwena Maciver: I think it’s a big part of it. I was interested in this idea of paradise for a while. Then I thought I’d moved on from it, but I think I’m always coming back to this attempt to recreate a good, safe space even if it only exists on a canvas.

Jonathan Evens: Your work consistently subverts prevailing mythologies but seems to do so through over acceptance; taking activities or phrases that are considered mundane and ordinary and showing their beauty and radicalism by revealing a bigger story of which they are part. Homeplace, your latest exhibition, would seem to be an example. Here, you have been inspired by Bell Hooks’ essay ‘Homeplace (a site of resistance)’. Hooks wrote about the task of constructing the homeplace as a safe space where black people can affirm each other and by so doing heal many of the wounds inflicted by racist domination. The ordinary, mundane task of homemaking, therefore becomes a radically subversive political gesture. Yet, is this not also an echo of Eden, a memory of paradise as affirming and inclusive, and therefore part of a bigger story which makes the mundane extraordinary?

Lakwena Maciver: Yes, what I have in mind while working on these Home paintings is this idea of creating a space of safety and I agree it’s probably still got some connection with this idea of paradise and wanting to make a little paradise in the middle of this wider, less than perfect world.

Jonathan Evens: How important has it been to bring together your world as a mother and your world as an artist in this project? To what extent has that given added integration to your work and life?

Lakwena Maciver: Well, my work was already very integrated into my life. It’s quite hard to separate the two, so I think this project has just embraced that. I’ve always made work out of a very personal space. It’s always very much linked to where I am at the moment, how I’m feeling, what’s going on in the world. When I was pregnant with my first son, I made the painting ‘You’ve been so good to me’. That’s an obvious example of that. So, what I’m doing now isn’t so different from that, it’s just maybe more intentional.

Jonathan Evens: Homeplace has been your lockdown project. How has the pandemic impacted this work?

Lakwena Maciver: Well, the pandemic is the reason I got the chance to start this project because before that I’d been thinking about it but hadn’t had the opportunity as I had recently had my baby and didn’t have time to paint. But my husband, who’s a barber, had to stop work because of the lockdown so I then had time to paint. The timing was really apt because the lockdown and Corona brought an added layer of significance to the idea of a safe space.

Jonathan Evens: How do you imagine the future as gold or the best as yet to come in a post-Covid world?

Lakwena Maciver: Well, when I talk about a gold future and ‘the best’ I’m actually referring to heaven, which I’m confident is unaffected by Covid.

The exhibition will continue following the current lockdown.