The old and the new sit easily with each other in Amsterdam, especially now that  its three powerhouse museums have all been reopened following extensive restructuring. So a weekend there was a good chance to see how the past is picked up in current trends. To that end, I visited:

John Chamberlain’s Naughtynightcap (2008), Ritzfrolick (2010), Fiddler’sfortune (2010) and Wishingwellwink (2010) outside the Rijksmuseum.  The Rijksmuseum, as stunningly restored as you might hope – as, indeed, it should be after 10 years and £500m.  It’s huge, and might be described in British terms as the V&A and National Gallery rolled into one – except it’s nearly all Dutch, bringing home just how rich their history is. Oddly, in that context, the vista on approaching is dominated currently by the biggest sculptures of John Chamberlain and Henry Moore. 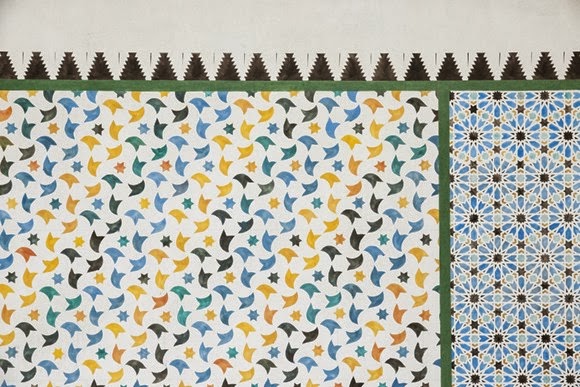 Lucy McKenzie: Something they have to live with (detail)
·        The Stedelijk Museum, which spans the modern and contemporary.  I caught the openings of major shows by Paulina Olowska (on the ground floor) and  ) Laurence Weiner (in an impressive new subterranean space) on the first anniversary of its reopening. Upstairs – by coincidence? – there was already a major show by Olowska’s friend Lucy McKenzie. Their double take on the interfaces between modernism and other cultures made for a rich pairing (Olowska with Malevich, Communist neons, Polish knitting designs and French street art in the max; MacKenzie with the Alhambra’s patterning, Glasgow bedsits and an interior by Adolf Loos). 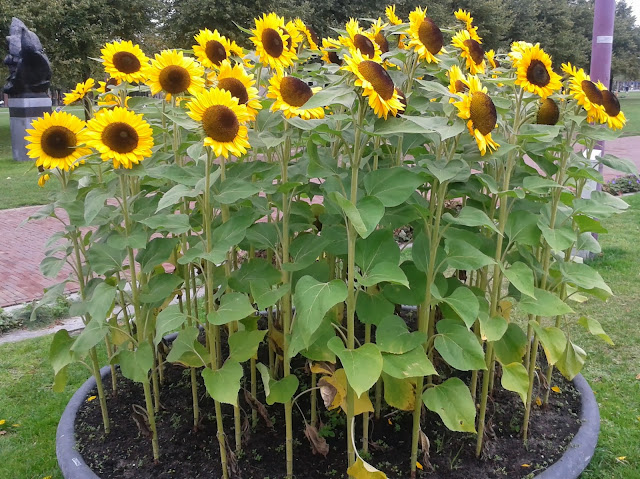 Outside the Van Gogh Museum  ·         The Van Gogh Museum, the last to reboot, opening in May 2013. The new display tells Vincent’s familiar chronological story through the lens of a concentration on his working methods, which has the advantage of emphasising the effort behind the genius which is so obvious to any reader of his letters, but not always part of the popular image. 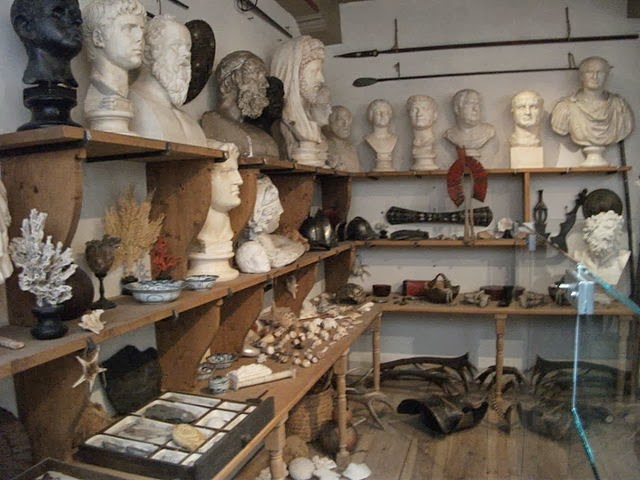 Recreation of the extensive collection room, the spending on which was one factor in Rembrandt’s bankruptcy ·         The Rembrandt House Museum, which looks nothing like it did 350 years ago from outside and has almost no original content inside (due partly to its all being auctioned when Rembrandt was made bankrupt in 1656), but which does nonetheless  provides a persuasive account of his daily life. 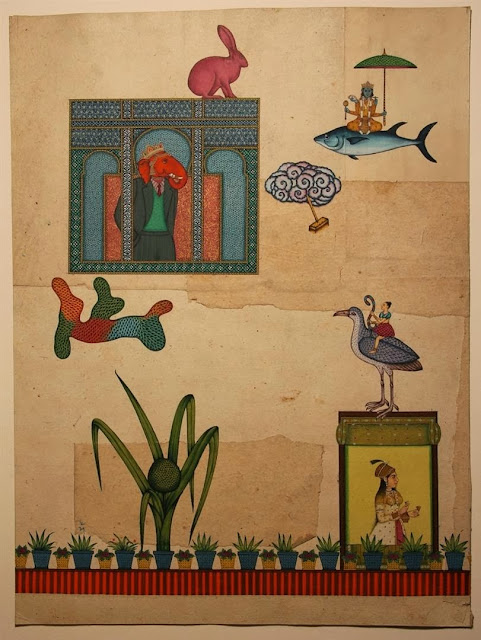 Alexander Gorlizki: Looking Out Looking In, 2013 at Galerie Martin Kudlek, Cologne in Amsterdam Drawing    ·         The second edition of the work on paper fair Amsterdam Drawing, held at the NDSM Wharf on the northern part of the city with 40 galleries – mostly Dutch – each given a 15 meter run of wall space in varying formations. It was, appropriate to its medium, pleasurably intimate. If there was a trend here, it was perhaps away from minutely realised detail and towards broader effects, in both figurative and abstract work. Plenty of the latter might be termed ‘rough minimalism’, in which a casual approach is applied to geometry. An exception were the work of  small-scale works of New York based Briton  Alexander Gorlizki, which look like collages but turn out to be fully hand-painted – by the artists who work for him in India. 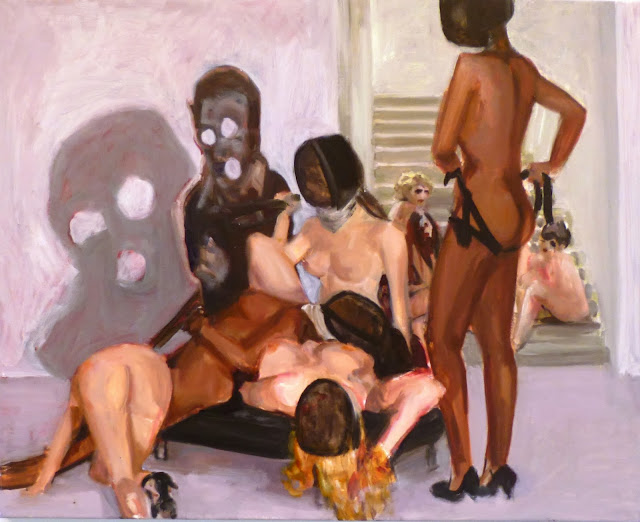 Dawn Mellor: from The Final Hoe-Down, depicting an imaginary artistic community in Austria at Galerie Gabriel Rolt  ·    Maybe half of the fifty-odd contemporary galleries attractively clustered around the canals. The was a triple British presence: highlights included Roger Hiorns’ new foam sculptures and plan for burying a plane (at Annet Gelink); a new series by the ever-pungent Dawn Mellor (Gabriel Rolt); and the most eye-catching opening featured a tattooist who turned some visitors into permanent records of the titles in  Harland Miller’s latest set of paintings of tweaked book covers. 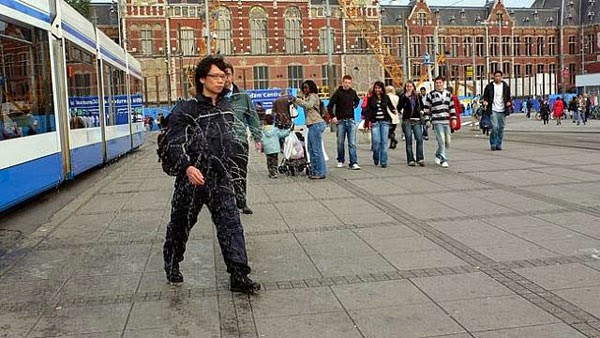 Kuang-Yu Tsui: still from Sea Level Leaker, 2006
·         De Appel Art Centre, crisply themed in apple red and green, where Artificial Amsterdam was a lively compendium of the city’s interaction with art made in it. The wittiest and most economically pointed was Taiwanese Kuang-Yu Tsui’s four minute film of himself walking around in a jacket which sprayed water whenever he was below sea level, which of course he mostly was. Thus the archetypal Dutch struggle with water levels was highlighted at a time when its relevance could become far wider.
I traveled courtesy of the very helpful tourist authorities www.holland.com , along with  www.artsholland.com and stayed at the comprehensively-equipped ‘Swiss passion’ of the Movenpick hotel, one tram stop from the railway station: www.moevenpick-hotels.com/en/europe/netherlands/amsterdam/hotel-amsterdam. I could have spent longer relaxing there, but outside was Amsterdam! As I tracked across this mix, older works often reminded me of newer ones, confirming how history’s inevitable impact on the present was especially clear here… 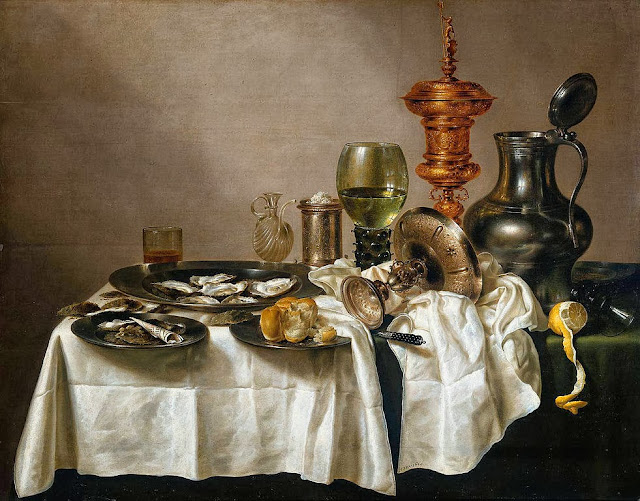 Willem Claesz Heda: Still Life with a Gilt Cup, 1635 in the Rijksmuseum

As the separate still life genre developed in the sixteenth century, Haarlem’s Willem Claesz Heda (1594-1680) found fame for his scenes of breakfasts, sometimes called ‘tonal banquets’ for their subtle interplay of the different but unifying greys in his exacting near-monochrome depictions of silver, pewter, glass, fish  and mother-of-pearl along with the occasional accent of gold or lemon. 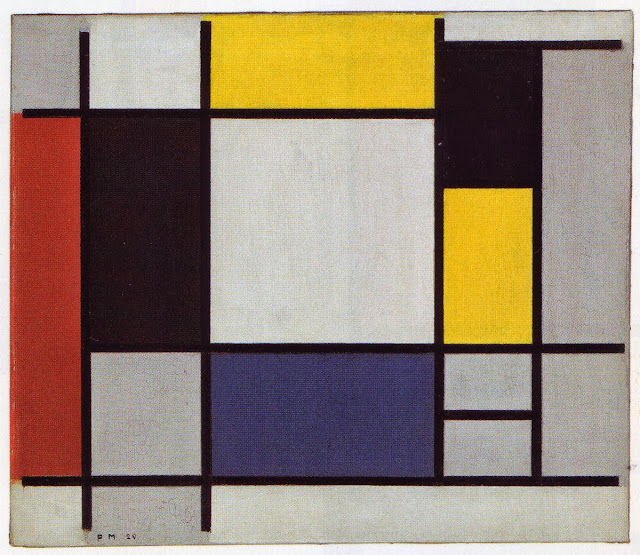 Mondrian is normally associated with work restricted to black, white and primaries. Yet the 1920’s works which initiated his mature style typically included grey, which only disappeared in the 30’s. They also had some delineating lines stopping short of the edge of the canvas, generating a less decisive, less settled sensation which has its own attraction. 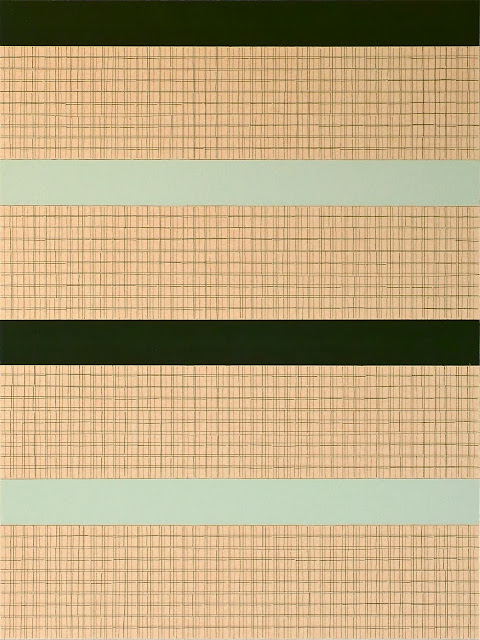 It’s no surprise that Piet Mondrian remains influential: you could see dancers cavorting with animated versions of his grids at Der Appel as well as plenty of related work at the Drawing Fair. German artist Frank Badur has for many years been utilising and undermining the grid, traditionally a starting point in eliminating subjectivity, as a site to be subtly infected with personality. He contrasts rigorously regular sections with sensitively humanised irregularities. 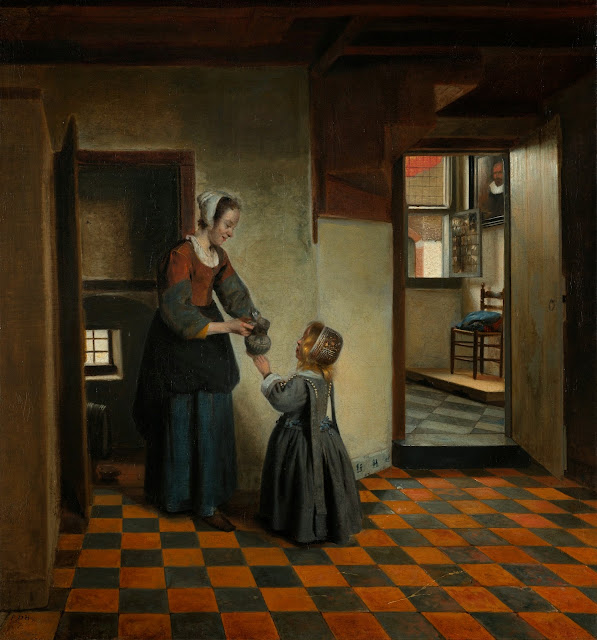 Pieter de Hooch: Woman with a Child in a Pantry, 1656-60 in the Rijksmuseum
Vermeer’s Delft contemporary was a master of rendering internal spaces, here by a doubled view through doorways into contrastingly-lit rooms beyond. Also not wholly unrelated to Mondriaan. That’s a boy, by the way, as indicated by the jerkin regardless of the long hair and dress; and may be de Hooch’s son. 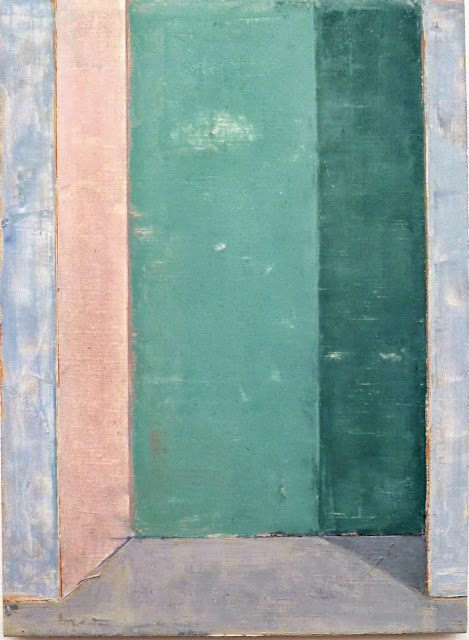 English-sounding Berliner Pius Fox’s small paintings on paper on board (which qualified for the Fair although any application of paint to canvas was banned) might reasonably be classified under the rough geometry trend as mentioned above.  Quite a few could also be read as doorways, visually punned with the framing of the picture itself.  There were, incidentally, two London-based galleries at the fair: Patrick Heide and Hidde van Segelen. 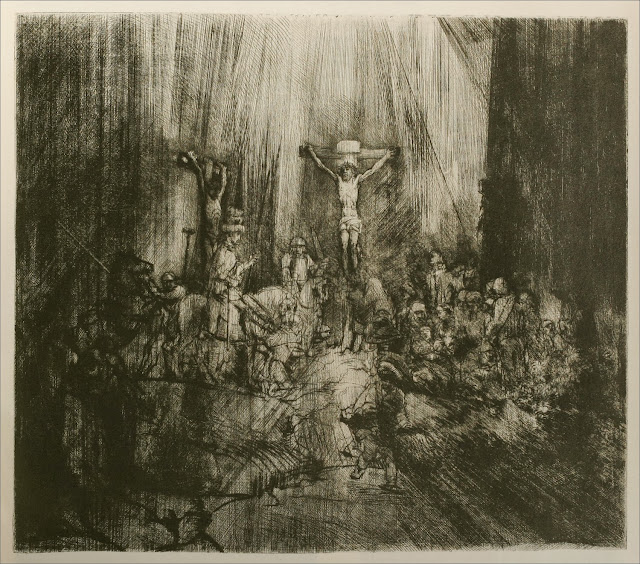 Rembrandt’s mastery of dramatic darks was shown at its most concentrated in the etchings at his house. These included the blackest stage of the various printings of Three Crosses, made years after he signed the third state. This state erases subsidiary characters through extended shadows, score dramatic curtains into the sky and hides one of the thieves – suitably enough, as it illustrates the moment of Christ’s death, when ‘there was darkness over the whole land’ (Mark 15:33).

Something of that atmosphere fed into the latest installations and charcoal drawings by Levi van Veluw.  The latter are a recent development, but are of a piece, being derived from his plans for installations. Having previously established his own language of obsessive order featuring thousands of square bricks, van Veluw turns to darkness and disorder in both media in his new show, in which desks collapse and cupboards fall as if returning to molecular origins. The results are gloweringly atmospheric. 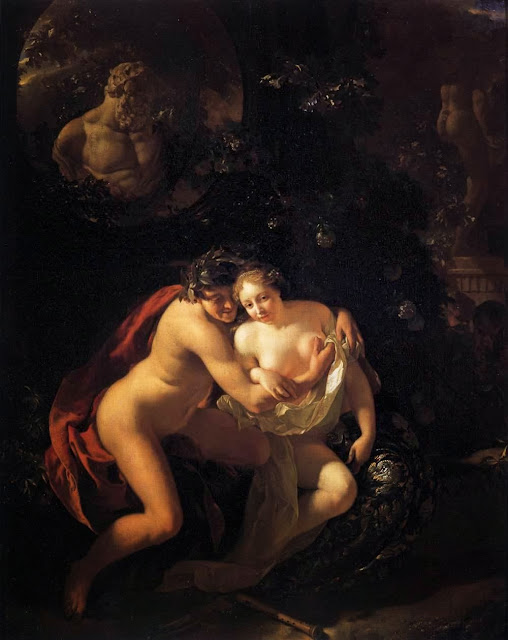 Adriaen van der Werff: A Couple Making Love in a Park Spied on by Children, 1694 – Rijksmuseum

Rotterdam painter Adriaen van der Werff (1659-1722) is hardly a star of the Rijksmuseum, though he was found immense success and wealth in the 18th century. There is, however, an attractively modern complexity to the voyeurism of this small painting: not only are there near-hidden children in the darkness, there are also statues, one as if looking on, and one turned cheekily away. 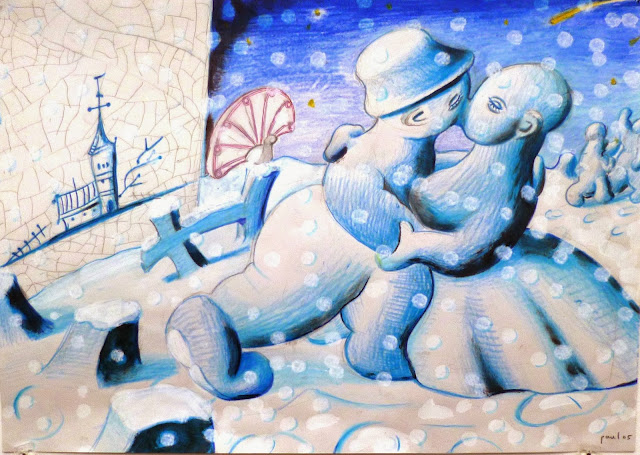 Paul Klemann has been painting his dreams for forty years, taking the process far enough that – although he spends ten hours a day in bed – he sets his alarm clock several times a night in order to scribble notes. The results often bring a child-like freshness to what might be seen as decidedly adult obsessions: the examples at the fair included a dish of penises being seasoned with salt as well as what looked like a rather touching scene between snow people.  Are they people, then, or statues? And surely children might be looking on… 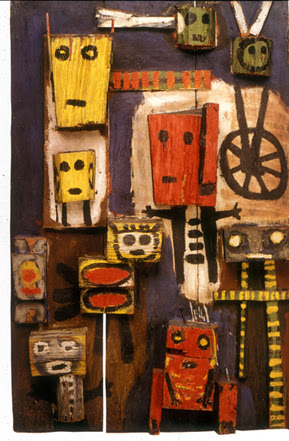 That childlike quality could also have been traced back to the CoBrA movement, which is well-represented in the Stedelijk. Karel Appel is the best-known representative of the ‘A’ in Copenhagen-Brussels-Amsterdam (he was a founder in 1948, along with Constant, Corneille, Christian Dotremont, Asger Jorn and Joseph Noiret.  Questioning Children 2 itself undercuts the childlike spontaneity by its origin in Appel seeing children begging in post-war Germany. If it looks familiar, by the way, that could be because the first version of Questioning Children is in Tate Modern. 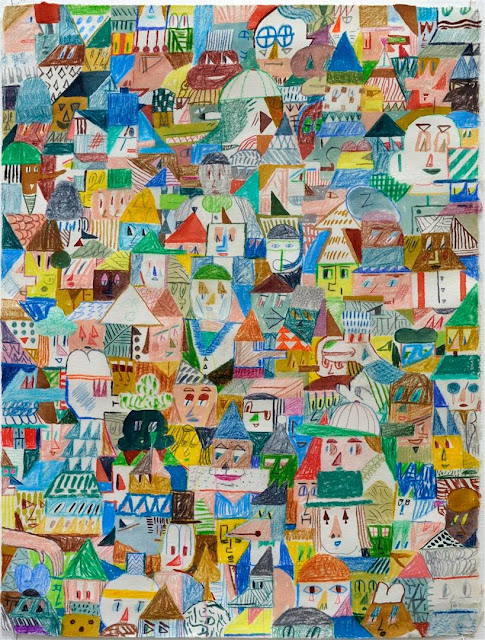 Vous Etes Ici,  whose directors started Amsterdam Drawing in 2012, have recently moved to  big space near the fair’s site. Kansas watercolourist Charlie Roberts tends to depict manic collectives, but his engaging recent series of parties of masks-come-houses is comparatively orderly and doesn’t seem to have much of Appel’s hidden angst, but who knows? 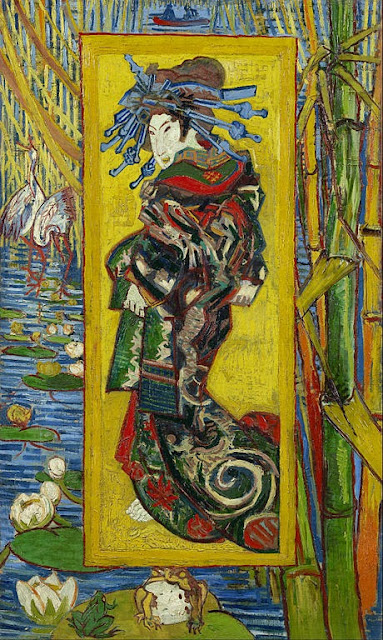 Vincent van Gogh: The Courtesan, 1887 at the Van Gogh Museum

Van Gogh was, of course, strongly influenced by the Japanese art: he collected  hundreds of prints, made several painted versions and fed its inventive perspective, dramatic cropping, strong diagonals and blocks of plain colour without shadows into his own style. Van Gogh added his own border to this copy of Eisen’s courtesan. It’s a combination of typical motifs from Japanese art which amplifies the central subject by reference to French slang of the time: a ‘crane’ being a prostitute, and a ‘frog pool’ a brothel. 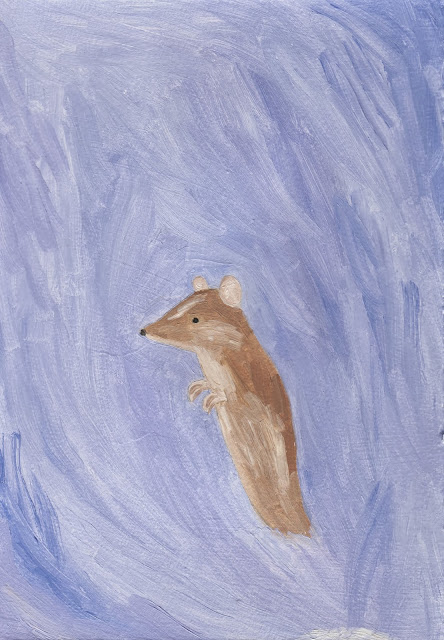 Yuko Murata: Untitled, 2013 at Gallery Side 2, Tokyo in Amsterdam Drawing

It wouldn’t be hard to speculate that the Japanese influence runs the other way in Yoko Murata’s paintings of animals and landscapes: there’s a freshness and passion to her paintwork.  The results, as in this ghost of a mouse, aren’t quite sweet: as she herself says, we cannot understand what animals are really thinking so however much we cherish them, they may bite us, and ‘to people who think ‘Oh, how cute’, I want to say ‘You’re being fooled by my animals!’ 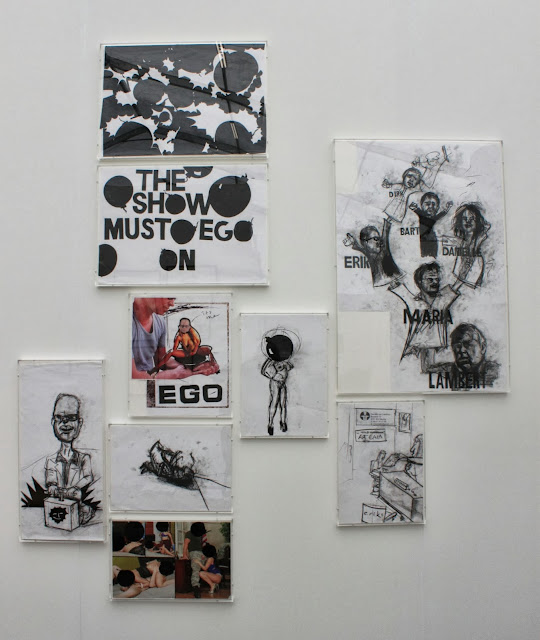 What, though, would van Gogh be doing were he alive today? Quite probably making charged installations driven by his idealism and difficulties, including the love-hate conflicts he had with his family. That might make Erik Van Lieshout  a truer successor than any painter. At the Stedelijk he was showing The Commission, his pointedly wacky record of his stint as artist in residence in a Rotterdam shopping centre, and had a complicated, personally-driven group of drawings at Art Amsterdam, mixing his own conflicted family (who are mainly social workers) with politics and pornography – and bringing a dash of John Baldeserri to the anarchy through the literal representation of a ‘sex bomb’ (which does indeed work similarly as ‘Seksbom’ in Dutch). 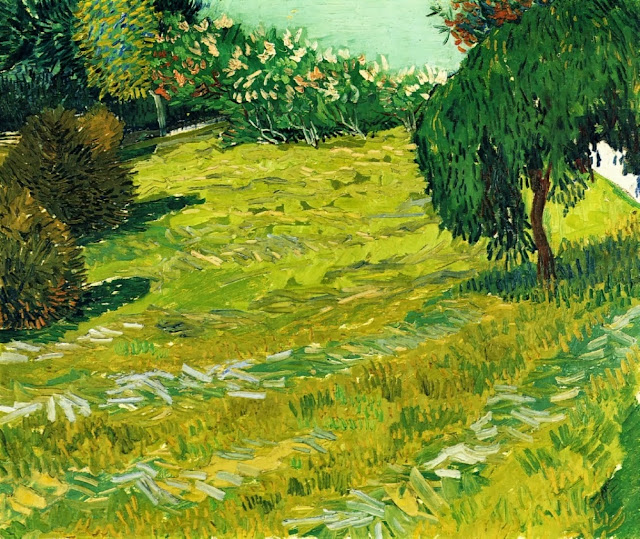 Vincent van Gogh: Newly Mown Lawn with a Weeping Tree  – Van Gogh Museum
Another match which appealed to me was between this Van Gogh, notable for its layering of different greens, and the saviours by herman de vries (it’s not me, it’s him, by the way: de vries disallows the hierarchical tendencies of capital letters). 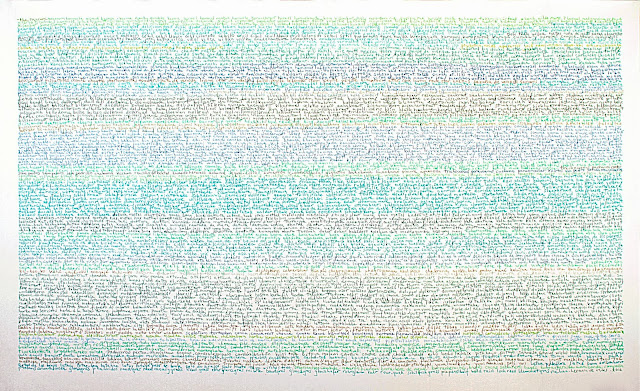 herman de vries: The Saviours at Art Affairs, Amsterdam in Amsterdam Drawing
The veteran Dutch conceptualist has several interesting streams of work, including making monochromes from as many different rocks and earths as he can obtain. The Saviours here are plants which can be used as drugs,  set out in a range of languages with random changes in the hue of green with each change. de vries, too, connects to the natural world and sets out its variety of greens – even if they’re tinged with lost innocence. 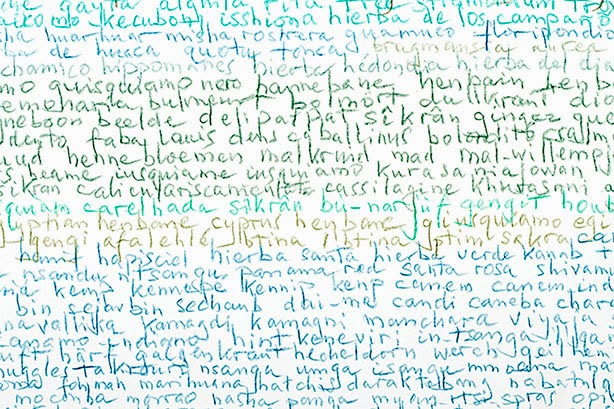