The catch-up continues: two more female artists, from different phases of the now safely defunct Modern Movement, are now being given their due. They are Lee Krasner, with a solo show at the Barbican; and Natalia Goncharova, at Tate Modern. Both of these were considerable talents. Were they game-changers? That, I think, is a slightly different question.

Krasner was a very considerable artist in her own right – ELS

Lee Krasner, born Lena to Russian-Jewish immigrant parents, certainly played a considerable role in the Abstract Expressionist movement, which made American art, for the first time, into a fully international force. Though other women artists were associated with Ab-Ex, she was the only one who was part of it from its very beginnings. Otherwise, it was essentially a club for macho boys. Krasner was the spouse of arguably the most macho of them all, Jackson Pollock, and played an essential part in preserving his heritage, following his death in a drunken car crash. This, however, is a conveniently simplified version. The back story of the relationship between the two artists, as presented in the catalogue for the Barbican show, doesn’t tackle one awkward set of facts, which is that Pollock was not only a drunk but also bisexual. He went on benders, which led to homosexual pick-ups. The text omits this but does mention that Pollock had his mistress in the car when the crash killed him. When he died, Krasner was taking a brief break in Europe, to get away from the situation. 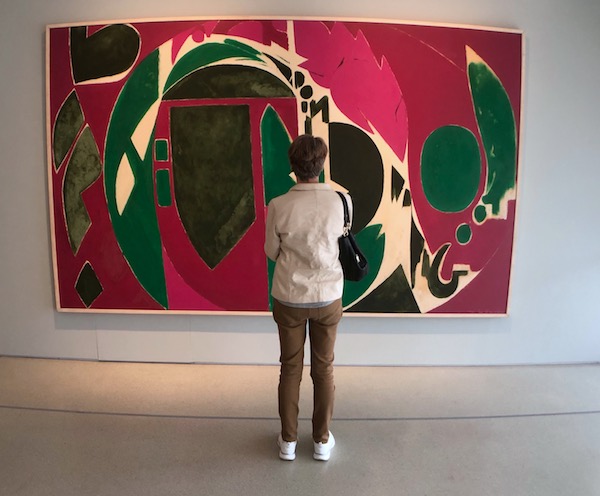 What the show demonstrates is three things:
First, and most important of all, that Krasner was a very considerable artist in her own right. Secondly, that she was a one-off, who didn’t fit comfortably into any stylistic category. Thirdly, that she was continually remaking herself, often in the most literal sense, by physically tearing apart old work to create something new.

One of the ironies of Abstract Expressionism is that it was in many ways deeply indebted to the European avant-garde art movements that preceded it. Pollock had a quintessentially American background. Most of the other big stars of the movement – such as Rothko and De Kooning – didn’t. They were outsiders, making a place for themselves in America. As a Jewish woman artist, this was also true of Krasner. Her outsider status in the American art world must have been one of the reasons why she changed her first name from Lena, then Lenore, to the genderless Lee. She was always very resistant to being type-cast as a ‘woman artist’.

At the same time, she was keenly aware of what was happening or had happened, in the European avant-garde during the first half of the 20th century. One of her admirations was Matisse. Pop Art, with its celebration of American demotic visual culture, was still to come.

Though there is no trace of Pop in Krasner’s output as a painter, it is interesting to see the work she did for the Works Project Administration during the war years – that is to say before she joined forces with Pollock. Large propaganda window displays, presented in the show as blown-up photographs, like the originals, obviously, don’t survive, precede but in many ways resemble the similar displays produced by Robert Rauschenberg and Jasper Johns during their prentice years, before they became fully-fledged professional artists. 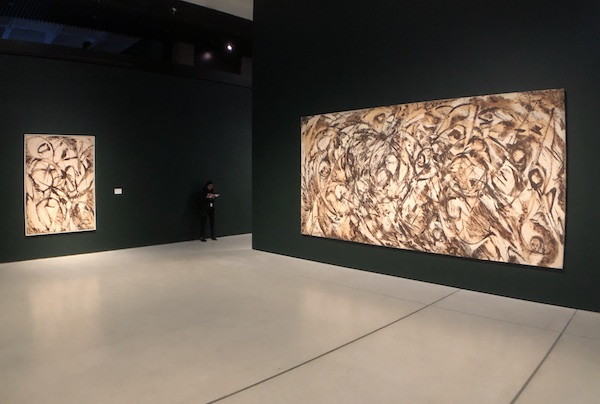 Another thing that struck me about the Krasner exhibition was the constant tug towards figurative representation present in so much of what she produced. The Barbican show is rather skittish about this, though it acknowledges and illustrates the fact that Krasner before she joined the avant-garde, was a very competent figurative artist. Later on, one is constantly aware of the tug towards figuration in what are – officially at least – abstract works. There’s none of the complete rejection of any reference to what can be seen in the outside world that you get, for example, in the mature productions of Mondrian. A similar tug towards figuration can be found in some of Jackson Pollock’s drip-paintings, where a figurative image sometimes seems to hover just beneath the surface, obscured by looping lines of paint. It is much more present in Krasner’s work. As you look at here, paintings, images manifest themselves – flowers, trees, birds. Human figures with enormous accusing eyes. Once they’ve appeared, it’s difficult to ignore them. The hardcover book, Lee Krasner: Living Colour that goes with the show slyly acknowledges this with some interspersed photographs of flowers but doesn’t directly acknowledge the phenomenon. Krasner’s purely abstract works, of which there are a few, seem to me much less powerful than these clandestinely figurative ones.

Krasner didn’t in fact fully find herself until after Pollock’s death in 1956. One reason for this was a practical one. When they were a married couple, it was he who had a large space in which to work. She was crammed into a tiny room. Once he was gone, the big space was hers, without competition. She was also as the widow of the now-sanctified Pollock, a person with some power in the art world, as the controller of his estate. Presentations of Abstract Expressionist art and books about the movement still tended to leave her out. Gradually, however, she achieved a solid reputation as a painter. 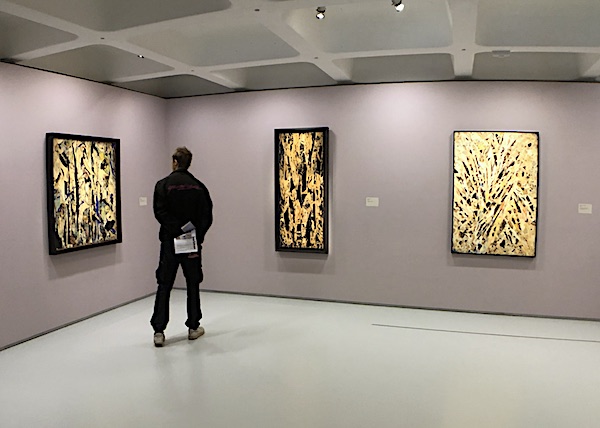 It’s noticeable, however, that much of her reputation, even then, was made outside America. British critics seem to have been particularly friendly to her work. In 1965 she had a retrospective at the Whitechapel Art Gallery, and in the following year, she was taken on by Marlborough-Gerson, soon to be simply the Marlborough Gallery. Her first major retrospective in the United States did not take place till 1983, opening at the Museum of Fine Arts Houston in October of that year, and touring to San Francisco, Norfolk Virginia, and Phoenix Arizona. Its final showing was at the Museum of Modern Art in New York, where she had always wished to be. By the time the exhibition got to New York, Krasner was dead. She was seventy-five years old.

A joint Thames & Hudson/Barbican book accompanies the exhibition. This fully-illustrated publication designed by A Practice for Everyday Life and co-published by Thames & Hudson, featuring essays from leading scholars including Katy Siegel, Suzanne Hudson and John Yau. The book also includes a previously unpublished interview between Lee Krasner and her biographer Gail Levin as well as a newly-commissioned chronology by Jessica Freeman-Attwood. Price: £35 ISBN: 9780500094082.