Open in Herne Hill from Friday 17th November the ‘Leftovers’ exhibition at 198 Contemporary Arts and Learning space. The show, brought together by the Procreate Project – a social enterprise encouraging and promoting the work of women artists who are mothers, sees 20 artists voicing the diversity of motherhood and womanhood through drawings, painting, photography, sculpture installation and video.

The exhibition focuses on the idea of what is left of women when mothering. The result is an autobiographical record of the perinatal period.

From the entrance, Rachel Fallon’s ‘Mettle’’ greets you. ‘Mettle: Referring to the ability to cope well with difficult situations’ is a sculpture showing what looks like an unidentified human bone encasing a cast iron core. The object could recall some prehistoric club with survival intent – be it for domestic or hunting purposes. Another ‘antique’ representation occurs when thinking of the English expression ‘to the bone’. ‘To the bone’ means “through the flesh to the unmost part”. This phrase, coined in 1400, means that everything extraneous has been cut away so that only bone remains alluding, in this case, to the impact of Mothering. 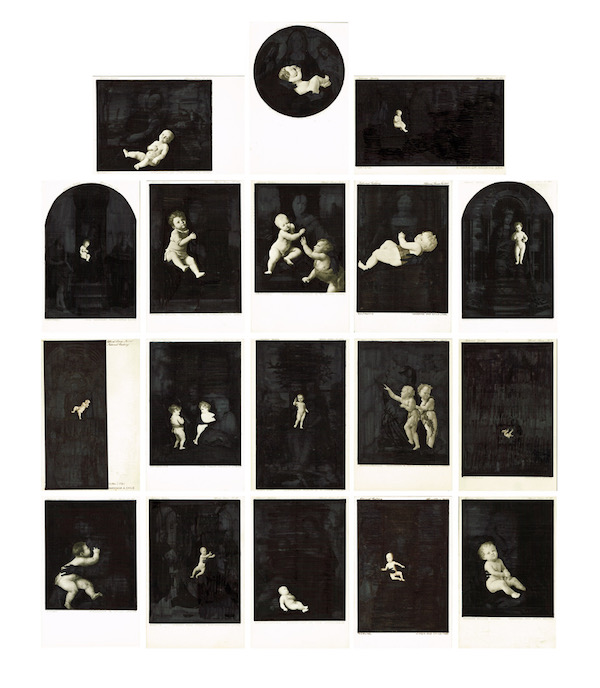 In the second room Alex March’s ‘Little Gods’ present 18 vintage National Gallery postcards with images of the Madonna and Child – figures of prevalent relevance in Christian iconography. March censors the scene by redacting every detail from the pictures except for the babies. In doing so, she proclaims the children ‘Little Gods’ perhaps surrendering to the idea that mothers are ruled by their children in what it’s today called ‘The Buddha generation’.

Deeper in the gallery Mary Martins movie is playing on the wall. Winner of this year’s Procreate Project Mother Art Prize, artist Mary Martins presents an animated 16mm black and white, film called ‘The Divide’. The Divide is a short documentary that explores single motherhood, how love exists and how it places itself during challenging circumstances. Martins’ positivity and non-judgmental standpoint are refreshing, sincere and non-stereotypical. The fractured images of her son’s paintings produced during the breakdown of the relationship with the father and the discontinuous conversation between her and her son sum up moments of precious happiness and deep maternal understanding.

The ‘Leftovers’ concept and interpretation are widely and solidly considered and expressed by the whole group who also succeed in delivering compelling work representing mothers’ existence and actuality – themes too often undervalued and overlooked in the art world.

From bigger than life paintings to very delicate unfired porcelain egg-shaped installation the whole display contains high standard, innovative and extremely well-executed work that is designed to engage the audience and that welcomes and opens the door to the personal and the political.