The ninth edition of the Liverpool Biennial got off to an impressive start last weekend with a varied array of events and exhibitions to see. Every two years international artists are invited to participate in what has now become one of the world’s most respected art biennials. The year’s theme examines the city’s past, present and future. Some of this is based on fact and other on pure fiction. It is up to the viewer to draw a conclusion while engaging with the local content on offer. My first stop was Tate Liverpool where we were greeted by Sally Tallant, the Director of the event, and the Director of Tate Liverpool, Francesco Manacorda. The exhibition walks you through a portal, where you encounter classical sculptures from the collection of National Museums Liverpool, alongside newly commissioned contemporary artworks.  The artists imagine a world where ancient Greek and contemporary artists have collaborated: merging the past, present and future into a single fiction just like the city’s architects did when they designed Liverpool’s neoclassical buildings in the 1800s. The Ancient Greece episode at Tate Liverpool also features new and existing work by other artists including Alisa Baremboym (USA), Mariana Castillo Deball (Mexico), Céline Condorelli (Italy/Switzerland/France), Jason Dodge (USA), Koenraad Dedobbeleer (Belgium), Lara Favaretto (Italy), Ramin Haerizadeh, Rokni Haerizadeh and Hesam Rahmanian (Iran), Lawrence Abu Hamdan (Jordan/UK/Lebanon), Samson Kambalu (Malawi), Jumana Manna (USA), Rita McBride (USA), Sahej Rahal (India) and Betty Woodman (USA). Next stop Cains Brewery where the exhibition continued in the vast rough and ready environs of an empty Victorian Brewery. Beneath the classic late Victorian former brewery on Stanhope Street is a lake that is 40 feet deep. It is rumoured that employees of the brewery used to row boats there, and in 1995 a diver found carved graffiti on the wall dating to 1864, 13 years before work began on the red brick building above. As you walk through the brewery’s canning hall, you will encounter a number of episodes, including Chinatown, Flashback and the Children’s Episode. At the centre is the large structure Collider, designed by Andreas Angelidakis, inspired by the Large Hadron Collider – a giant instrument that operates at the boundaries of scientic knowledge. Angelidakis’s structure divides the space into different episodes. Chinatown, the first episode you come upon, is entered through a portal made by Céline Condorelli. Chinatown contains work made on site by Ramin Haerizadeh, Rokni Haerizadeh and Hesam Rahmanian, who have sent to Liverpool objects, props, films and works from their art collection. These items have been ‘smuggled’ by sea in a shipping container from Dubai, where the Iranian artists are currently living in exile. 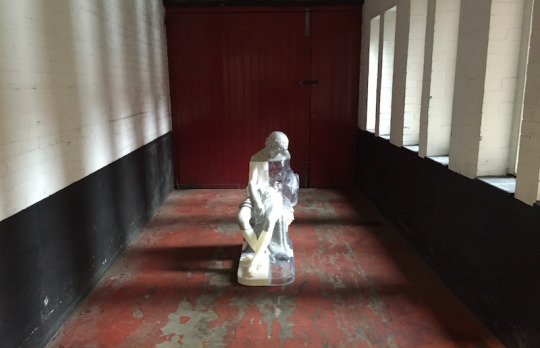 Nearby, Audrey Cottin’s Flour Tables invite you to tell a story using the medium of dough, recorded by a graphic artist. Ian Cheng’s Emissary Forks For You is a mixed reality simulation in which a small dog, Shiba Emissary, verbally commands the viewer to follow her throughout the exhibition. With promise of reward, the viewer assumes a new role: Shiba Emissary’s pet. Lara Favaretto’s Lost and Found suitcases are the result of yearly visits to places where lost luggage can be found: flea-markets, railway stations or dumps. Having obtained a suitcase, she combines what is already inside with new items, locks the case and throws away the key. Several of these works can be found across many exhibition sites. Rita McBride’s Perfiles depict the outline of houses in Pompeii, a city in the South of Italy that was buried in metres of ash and pumice after the volcanic eruption of Mount Vesuvius in 79AD. Sculptural memories of buildings consumed by time, the Perfiles are distributed across the exhibition. At the centre of the Collider is the Children’s Episode. For this episode, Céline Condorelli has designed a portal that is only for children to use. Since April 2016, Marvin Gaye Chetwynd has been working through workshops and live performances with 34 children and 44 teenagers from across Liverpool to make the film Dogsy Ma Bone, using the city as a backdrop to the action. The film is inspired by Betty Boop’s A Song A Day, 1936, in which Betty sings to exotic animals in a hospital she owns, and Bertolt Brecht’s satirical musical Threepenny Opera, 1928. Parts of the film have been remade by teenagers who have created home-made or ‘sweded’ versions of certain scenes. Over the Biennial’s opening weekend, some parts of the film are being performed live in the space by the children and teenagers themselves. 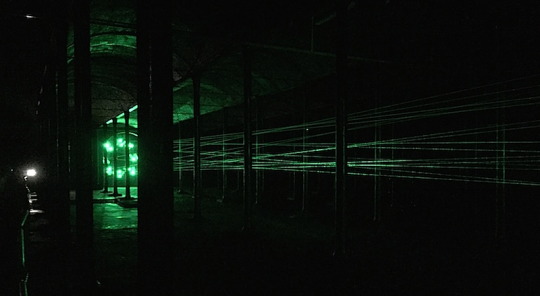 Liverpool 8 was next on the list with a visit to the Toxteth Reservoir and an amazing laser light installation by the American artist Rita McBride who staged her artwork in a disused brick reservoir which has been empty since it was decommissioned by United Utilities in 1997, but it once stored around three million gallons of water which was pumped to houses across Liverpool. 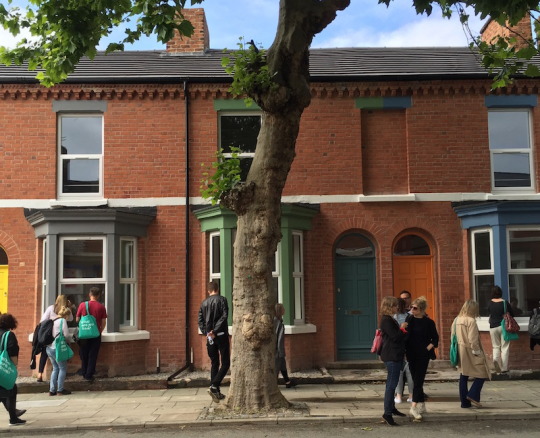 Other works in the area included Lara Favaretto’s Momentary Monument, a giant granite boulder which is actually hollow containing a slot to put money. Much like Roman Holiday, I was tempted to put my hand in but afraid of it being chopped off or trapped! Assemble winners of the Turner Prize 2015 were also present with their Granby Four Streets, Liverpool project on view. FACT presents Lucy Beech’s new film Pharmakon (in Gallery 2), co commissioned by Liverpool Biennial and FACT, explores how disease operates in an era of mass communication. And in the foyer, Yin-Ju Chen’s Extrastellar Evaluations considers humanity from an extraterrestrial point of view. Gallery 1 shows works by Krzysztof Wodiczko, who uses technology and prosthetics to explore themes of immigration and displacement, as in the immersive installation Guests. Open Eye features an exhibition with a particular focus on the Flashback and Children’s episodes and features international artists Koki Tanaka, Fabien Giraud and Raphaël Siboni, Ramin Haerizadeh, Rokni Haerizadeh and Hesam Rahmanian.The Flashback episode presents a way of experiencing history as it punctures the present, unexpectedly. The Children’s episode invites artists to consider children as the primary audience, making work with and for them. Koki Tanaka’s diverse art practice spans video, photography, site-specific installation, and interventional projects. For Open Eye Gallery, Koki Tanaka revisits the scene of a huge protest in Liverpool (1985) that involved around 10,000 children, all of whom were angered by the Conservative government’s Youth Training Scheme (YTS). Fabien Giraud and Raphaël Siboni’s collaborative work reflects on cinema history, philosophy and technological evolution. La Vallée Von Uexküll is the third in a series of films that respond to a strict protocol. In this film the sunset is filmed with a video camera but without any lens. Every time progress is made in image resolution and a new camera brought to the market, the film is shot once again. The artists will finish this film series once the resolution of the image surpasses the capacity of human perception – when the ‘eye’ of the camera can see more than the human ‘eye’. Three submersibles, Anti-Catty, Princess Rambo and Space-Sheep, have smuggled artwork from Dubai to Liverpool. By circumnavigating the normal procedures used to transport artworks from one place to another, they deliberately degrade the usual values assigned to art objects. In the gallery, and across other venues, are videos by Ramin Haerizadeh, Rokni Haerizadeh and Hesam Rahmanian that document the daily lives of the submersibles, the smuggling and objects that have emerged from this process. 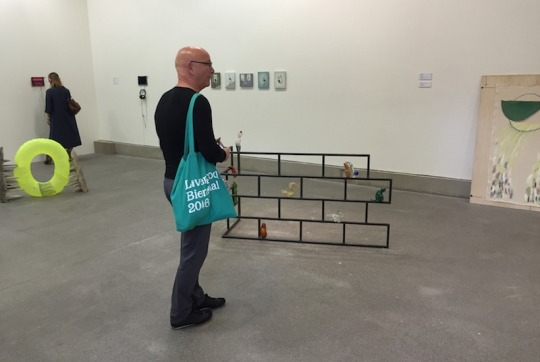 Finally Bloomberg New Contemporaries at the Bluecoat, a group show of emerging artists from the main art colleges, is well worth a visit. (See Feature)

This is the most varied and dynamic event in its nine edition history. There is so much to see and do in Liverpool during the Biennial that it is difficult to take it all in. Going for just a few days should be enough time to see most of the main features. It is however worth noting that several collateral events will be taking place throughout the months and it is a good idea to check with the official website to get a grip on what there is to see and do. http://www.biennial.com/